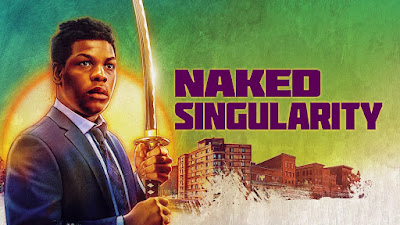 It’s not the singer; It’s the song. Unless it’s neither.

We often forget that movies are incredibly hard to make. Even the lowest-budget indies are massive undertakings that require wit, skill, and patience to execute. Blockbuster fare is even more daunting, with entire corporations built from the ground up to oversee their production, release, and cultural impact. Auteur theorists may disagree, but film is a collaborative effort, maybe one of the last we have left. The movies that work — which, when we consider all cinema over all time, are few and far between — do so for a rich variety of reasons, each one demonstrating the undeniable truth that movies are the best art of all the arts. Maybe a killer screenplay is fully formed from the start, a dynamic and propulsive piece of literature needing only to be brought to life by great performances. Maybe it’s a director’s bold vision — their uncanny ability to stage a compelling scene — that shapes a lackluster script into something iconic. Maybe it’s an editor’s ear for the music of cinema that molds a shaggy, shapeless mess of footage into a Best Picture winner. 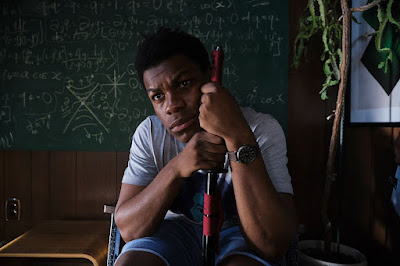 Then there are the rare projects in which almost nothing works, like Chase Palmer’s directorial debut, Naked Singularity. The sci-fi comedy is what we might call a “first pancake movie”: The first pancake is never quite right, is it? We measure the ingredients, mix them together, heat the pan to the prescribed temperature, but it’s not until the batter hits the teflon that we know whether or not it’s going to be edible. On paper, Palmer’s screenplay (co-written with David Matthews and based on the novel by Sergio De La Pava) is a winner: A young New York public defender (John Boyega as Casi) is exhausted by a justice system that feeds on those less fortunate. Day after day, he defends immigrants and minorities from an unyielding monster, a broken bureaucracy that seems to exploit society’s worst prejudices. When one such reprobate (Olivia Cooke as Lea) reveals that a drug-running friend of hers (Ed Skrein as Craig) is about to make a fifteen million-dollar score, Casi decides to level the playing field: Steal from the rich and give to the poor.

Teaming up with loud-mouthed buddy Dane (Bill Skarsgard), Casi begins navigating the dangerous world of organized crime, falling for the beautiful Lea and consulting with theoretical physicist neighbor Angus (Tim Blake Nelson) along the way. Why theoretical physics? Because the universe is expanding, Angus tells us; the titular naked singularity is just days away. Casi feels odd gravitational anomalies everywhere he goes, which parallel his change in moral perspective and emphasize the collapse of the broken system that surrounds him. This sounds fun, right? Ocean’s Eleven meets Melancholia. And it should be. Boyega and Cooke are talented actors who give us a few moments of real vulnerability, and Skrein makes for an exceptional scumbag. Palmer (who also co-wrote the screenplay for 2017’s It) brings a few visual flourishes to his first feature, finding angles of New York we don’t typically see on screen. If cooked at the right heat for just the right amount of time, each ingredient in Naked Singularity would make for a quality batch of pancakes. 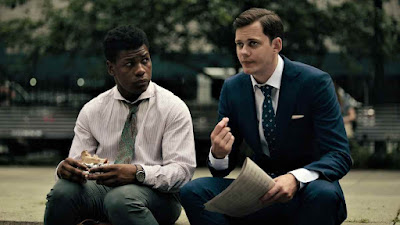 Unfortunately, Naked Singularity never finds a storytelling rhythm to match its lofty intellectual ambitions. Its dark comedy is patchy, working best when Casi is trading barbs with a combative judge (Linda Lavin) or theories of the universe with the cloudcuckoolander, Angus. The young lawyer’s intentions are laudable, sure, but we don’t have a strong sense of what they are for most of the film, nor do we really understand the throughline of his actions until the coda, by which time it’s far too late to get emotionally involved. Lea’s character arc has the most juice to it, and her tendency toward self-destruction leads to some clever moments of tension, but she’s underserved by a story that keeps insisting we be more interested in the listless Casi. Without having read De La Pava’s source material, it’s easy to imagine Palmer and Matthews skimming through and finding bits that would read well on screen but never fully grasping how to convey the dramatic beats in-between. Again, the pancake isn’t quite cooked all the way through. 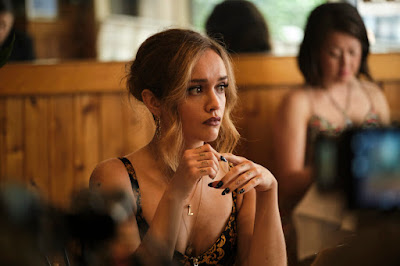 It’s this failure to live up to a strong premise that makes Naked Singularity an especially frustrating final product. The astro-physics of it all never quite gels thematically, as there are no tangible changes — Casi’s financial situation aside — to the galactic status quo. Excising that bit entirely would have made for a stronger narrative, but then, that’s half the premise, isn’t it? We can only conclude that Naked Singularity might have been successful had it been brought to the screen by different creatives with different talents and attention to different details. None of the people involved are specifically to blame, necessarily, but it’s one of those times when good people who love each other just can’t make the relationship work. It’s more proof that great cinema is an alchemical mixture that can’t be forced, that at least one person involved needs to have the magic touch to take things over the top. Here’s hoping one of those people takes another crack at De La Pava’s novel in the near future. There’s definitely a pancake here worth eating.
Posted by Patrick Bromley at 12:00 PM