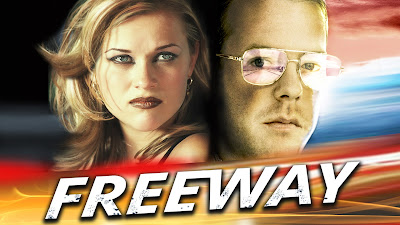 “Get your goddamn hands off my anatomy!” shrieks a teenage Reese Witherspoon to her skeezed out stepdad in an early scene from Matthew Bright’s teensploitation take on Little Red Riding Hood. A few minutes later, she’s hitting the road after her useless parental units get hauled off to jail. Maybe the grandmother she’s never met will save her from the horrors of the foster care system, so over the freeway and through the hood to grandmother’s house (or, in this case, trailer) she goes.

Along the way, she has a bit of car trouble and a bespectacled Kiefer Sutherland wearing a corduroy blazer complete with elbow patches comes to her apparent rescue. His name is Bob Wolverton, and with a name like that how could you go wrong climbing in his car and telling him you’re basically a teenage girl alone in the world with no one to look after you? When he starts to get a little too gleefully inquisitive about her tale of woe and abuse at the hands of men, she makes a connection. “You’re not that I-5 Killer now are you, Bob? What, are you gonna kill me and do sex to my dead body?” Oh, that’s exactly what he plans to do. But this firecracker with the colorful vocabulary isn’t about to become his next victim. She takes control of the situation and next thing you know she’s ordering coffee and breakfast at a diner covered in blood that’s not her own. 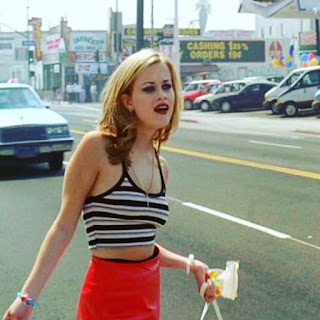 You might think I’ve given too much away, but this is really just the first chapter in the saga of a movie that is balls out banana pants. You have never seen Reese Witherspoon like this, or heard her utter the kinds of unhinged lines she gets to say in Freeway. “I get claustrophobic sucking strange dick,” is one of my personal favorites, but there are plenty of others to choose from. The writer and director, Matthew Bright, cites as inspiration some of my favorite hard boiled noir writers: Jim Thompson, Robert Towne, James Ellroy. He had previously scripted the early '90s movie Gun Crazy (a very loose remake of the iconic noir), directed by Tamra Davis, in which a teenage Drew Barrymore shoots her abusive stepfather and runs away with her ex-con lover. This movie gives its heroine much more agency, and leans into the dark humor rather than the melodrama of the teenage wasteland it depicts.

Researching this movie led me to discover some choice interviews with various participants. For example, Oliver Stone (who produced it) goes on record talking about how rare it was to see what it’s “really like” inside a youth detention center and what young people with improper parenting are up to these days. I’m going to go out on a limb and say this was never a realistic portrayal of juvenile delinquency but sure, go off, Ollie. Whatever you say. Then we have a behind the scenes interview with the young Reese Witherspoon, where she talks about preparing for this role by “listening to rappers” and then mentions Mary J. Blige and how she wants to be treated with respect. 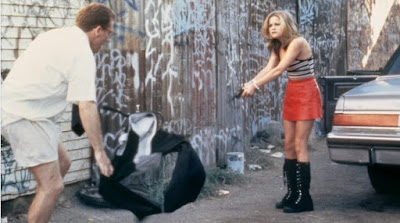 My favorite goose chase discovery was an interview with Matthew Bright conducted via email, supposedly during a time when Bright was recovering from swine flu somewhere south of the US border in a “jungle.” You can find it for yourself on a website that looks like a cache of the Geocities/Angelfire pages I coded using rudimentary HTML when I was about 16. In the interview, Bright compares Reese Witherspoon’s performance to Jimi Hendrix at the Whisky-a-Go-Go and likens Brittany Murphy to Van Gogh. Real great stuff.

Not everything in this movie has aged gracefully. There are some uncomfortable racial elements that make me cringe, even though the movie tries to have it both ways on this topic. It’s not the most enlightened take on sex workers either, although I’d argue that kind of comes with the territory in an exploitation film. You shouldn’t watch this if you need your movies to embody the moral high ground, is what I’m saying. Setting aside these questionable choices, this thing still mostly holds up as a cult classic with appearances from the likes of Dan Hedaya, Bokeem Woodbine, Amanda Plummer, Brooke Shields, and Guillermo Diaz.

I can’t write about this movie without mentioning the music—it’s got a score by Danny Elfman, who apparently is a childhood friend of the director, as well as songs by only in the 9'0s artists like Miss Murgatroid, Sam Phipps (of Oingo Boingo), and The Twanglers. Oh, and the opening credits are amazing—animated drawings of a scantily clad Little Red Riding Hood being stalked by a lascivious Big Bad Wolf. 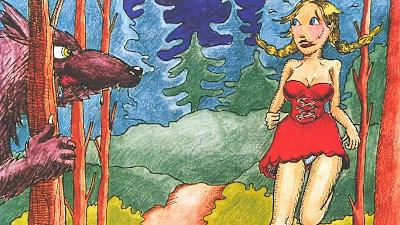 As I habitually do after watching a movie released during Roger Ebert’s lifetime, I checked out what he had to say about Freeway. I was pleasantly surprised to learn he liked it enough to give it 3.5 out of 4 stars, and I’ll end with a quote from his review that I think sums it up better than I ever could:

“Occasionally an unsuspecting innocent will stumble into a movie like this and send me an anguished postcard, asking how I could possibly give a favorable review to such trash…. We have a great appetite in this country for books, TV shows and movies about serial killers, perverted hermits, mad bombers and pathological torturers -- just as long as their deeds are cloaked in moralistic judgments. We pant over the pages before closing the book and repeating, with Richard Nixon, ‘but . . . that would be wrong.’ Freeway illuminates our secret appetites.”
If you’ve got a hunger for '90s cult movies, this one is sure to satisfy.
Posted by Patrick Bromley at 2:00 PM