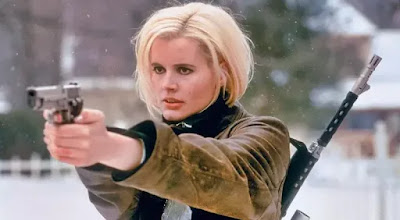 Our resident fashion expert weighs in on the movie fashions that made 1996 great.
William Shakespeare's Romeo + Juliet 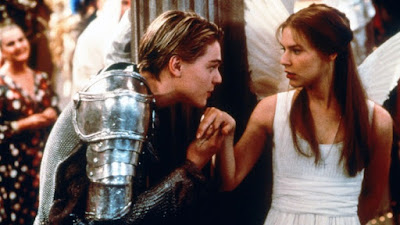 Baz Luhrmann followed up his splashy first film with an even flashier version of the classic Shakespeare play Romeo and Juliet. Moving it to LA, pumping up the modernity with color and music, and including a plus sign in the title, Luhrmann made a classic love story iconic for a new generation. The spectacle of Romeo + Juliet heightened the play's effect by using Shakespeare’s words with stylistic vivid colors and camera movements. The strongest piece of this puzzle is the costuming. The two fighting clans are first seen wearing bright Hawaiian style shirts with their guns holstered in leather vests sets the scene immediately. But the looks that made this movie are the angel and knight costumes worn by Claire Danes and Leonardo Di Caprio in the meet cute scene by the fish tank. Destined to be the number one couples costume that year and for years to come. The scene that made teenagers run out and buy copies of Shakespeare was costumed by Kym Barrett, who would also work with Wachowskis on The Matrix and Speed Racer. Barrett perfectly played off the youth and innocence of the star crossed lovers by placing them in idyllic costumes that played into gender norms of perfection, an angel for boys and a knight for girls. This costume was even just recently even used by Jules in Euphoria in the ultimate '90s appreciation moment, showing the resonance of those costumes. 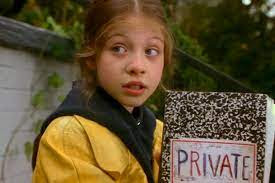 A formative movie in terms of clothing for me was Harriet the Spy. Based on the book, it's a coming of age story about Harriet and her friends and her burgeoning career as writer. By carrying around her black and white speckled composition book in an oversized yellow coat over striped shirts; she was young girl desperately trying to be an adult while still enjoying her childhood. It captures perfectly the pre- adolescent time in your life when you start growing apart from friends and are starting to have tension with your parents.This film is also beautifully shot, showing off New York in the fall in its full glory. And if New York is in fall, then we are going to see some gorgeous coats and knits. Harriet and her friends are dressed in bright primary colors that are in tune with the fall leaves and schoolyard plaid backpacks. Their outfits are usually color uniform to the person wearing all deep red or mustard yellow in different textures and tones. This film has inspired young writers to grab a composition book and binoculars and start writing down everything that they see, all with the distant hope of becoming a distinguished author one day. 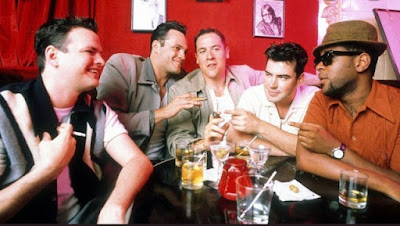 Jon Favreau’s first script became the movie Swingers, which was about heart ache and the big city of Los Angeles. This movie also helped put Vince Vaughn and Heather Graham on the map and jump started Doug Liman’s directing career. It's a small-scale movie that shows the evolution of heartbreak and the hope of finding your way out of it. The title comes from the swing club that the main characters visit and the '50s rockabilly style that they sport. This style had seen a resurgence in the early '90s, such as in the character of Christian in Clueless the year before. Favreau and Vaughn rock Panama shirts and greaser hair while Graham wears pin up curls and A-line dresses. Swing clubs and music helped push this revival with popular hits from bands the Big Bad Voodoo Daddies having charting hits. Hitting its height in the '90s, swingers became a look that would never go out of style. A follow up to Renny Harlin’s notorious bomb Cutthroat Island, the director paired with his soon-to-be ex-wife Geena Davis in one last film with The Long Kiss Goodnight, a spy thriller that highlighted Davis’ athletic and chameleon ability to move from suburban housewife to ice- queen, government agent. Samuel L Jackson plays a PI with a heart of gold that helps Davis’ character figure out her forgotten past. The two leads play intensely off each other as they make their way out of obstacle after obstacle to save Davis from old enemies. Geena Davis starts the film off as a housewife with her signature red curly hair and dowdy Laura Ashley prints, but she shines in a Mrs. Claus costume for a holiday parade just as she she starting to put the pieces together about where she may have come from. When she goes on the run, she cuts her hair and dies it ice blonde in order to inhabit her previous self, known as “Charly.” Jackson truly shines in the cold weather scenery while wearing dark brown leather jackets, green textured turtleneck sweaters, and my personal favorite, bright green jacket and matching fuzzy hat. Jackson brings style to the usually monotone spy thriller palette through his charm and '70s inspired fits. The costume designer, Michael Kaplan, who started his career costume designing Blade Runner, would also bring this new vintage style to the quintessentially designed Seven, Fight Club, and Miami Vice. 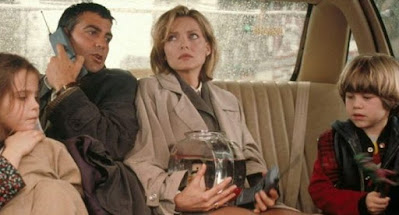 The working parent stereotype hit its stride in the '90s as films tackled the idea of the “modern family,” aka divorced parents. One Fine Day shows the lives of two divorced parents played by George Clooney and Michelle Pfeiffer, and the highjacks that happens when everything goes wrong. These two have screwball banter and chemistry as they blame each other for all the mishaps that occur during the day while they are tasked with taking care of their kids when childcare becomes unavailable. They inevitably fall for each other as they learn to grow up and let go. These two beautiful people made the unforgiving khaki and olive color palette that was popular in the '90s look like the pinnacle of fashion. They both wear different long dusters that every parent had hanging in their coat closet. Although the most striking look comes from when Michelle Pfeiffer has an incident with a juice box and is forced to trade out her buttoned up collared shirt for a T-Rex shirt that is her son’s. She puts her khaki vest over the t-rex shirt and instantly becomes a hipster icon of clashing styles that is still popular today. 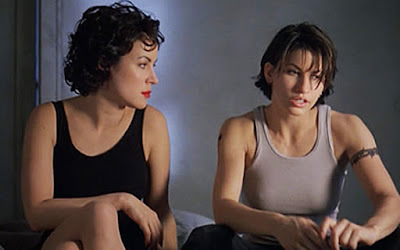 In the Wachowski’s first film Bound, they bring to life a queer-positive story wrapped within a heist film. Telling the love story of two women from the wrong side of the tracks in ex- con Corky and mob girlfriend Violet, this is the Wachowski’s first foray into playing with the idea of gender norms as two pre- transitioned women, as well as the themes of finding your identity and love is the point of life that they would later play with in the Matrix films and Cloud Atlas.

A subtle film compared to the action genre that they would reinvent, the chemistry between Jennifer Tilly and Gina Gershon becomes an A plot and the heist is a subplot that would allow them to be together. Gershon plays the more masculine part in white tank tops and arm tattoos, her street wise, assured voice working against Tilly’s Betty Boop style rasp. Tilly is a temptress who is awakened by Gershon in baby doll dresses and corset style tops. They also play off each other by wearing two different versions of the iconic '90s black leather jacket. They are both fighting against the perceptions of the world by finding strength in each other’s love to walk away from the life that they knew and embrace a new one together.