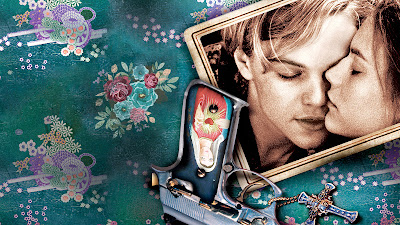 It’s goofy, trashy, and over-the-top. And so is Baz Luhrmann’s version.

Many contemporary reviews of Baz Luhrmann’s Romeo + Juliet decried it an affront to Shakespeare’s legendary tragedy, an ill-advised attempt to make Elizabethan theater appealing to the MTV generation. Roger Ebert called it “a very bad idea,” specifically citing Leonardo DiCaprio and Claire Danes as actors “in over their heads” and unable to convey the true grace and beauty of the Bard’s poetry. Entertainment Weekly called the film blasphemous, a “glib, futuristic action cartoon” that ramps up the camp value so far that it becomes unrecognizable as Western literature’s great love story. Variety said that it lacks the emotional resonance of Franco Zeffierelli’s 1968 version, while The Washington Post protested that its visual style “overpowers the verbal poetry — which used to be the most important aspect of a Shakespeare play.” Romeo + Juliet’s fiercest critics tended to agree that Luhrmann’s manic, overwrought adaptation was a juvenile embarrassment that stood in stark contrast to the source material’s somber dramatics. Every one of them was wrong. 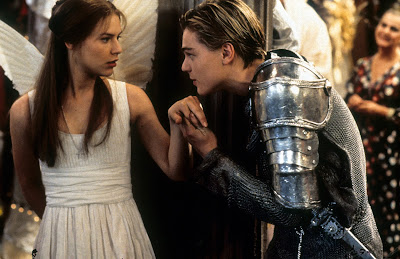 Because no matter how much your high school English teacher might have tried to convince you otherwise, this high school English teacher is here to tell you that William Shakespeare’s Romeo and Juliet is a black comedy. It dilutes the essence of a dozen other stories into one winking, bombastic takedown of two hormonal teenagers and the oppressive religious zealotry that drove them to suicide after a slight misunderstanding mildly inconveniences them for half an hour. Baz Luhrmann grabs this reading by the horns, explicitly pairing the original text with a modern setting in order to emphasize the preposterous excess rooted in the Bard’s elegant balladry. Luhrmann reimagines Verona in SoCal, a town torn asunder by a pair of warring mafia families: The Montagues (headed by Brian Dennehy) and the Capulets (headed by Paul Sorvino). As their lieutenants Benvolio (Dash Mihok) and Tybalt (John Leguizamo) bicker over territory, their children (DiCaprio as Romeo and Danes as Juliet) nurse a secret romance. It does not work out.

As in Shakespeare’s original, everyone in Romeo + Juliet is suffering from a debilitating case of horniness. We open on a joyride-turned-shootout between bawdy streetgangs — who refer to their hand cannons as “blades” and “daggers” in preservation of Shakespeare’s phallic imagery — that crescendos in a glorious peacock routine from Leguizamo’s flamboyant Prince of Cats. The scene then turns to a lovelorn Romeo, whose recent rejection by Rosaline has sent him into a Sexy Beachfront Depression. DiCaprio’s whiny, exasperated line delivery is entirely in keeping with Romeo’s mercurial nature, as his complaints about Rosaline’s resistance to his noble peen are forgotten as soon as Juliet appears. Next enters the ostentatious Mercutio (a stunning Harold Perrineau), whose freewheeling charisma is complimented in this version by his gender-bending style. He ends his famous “Queen Mab” speech — that of a fairy who inspires dreams of love — by offering Romeo a tab of ecstasy, more obvious Shakepearan subtext made literal. 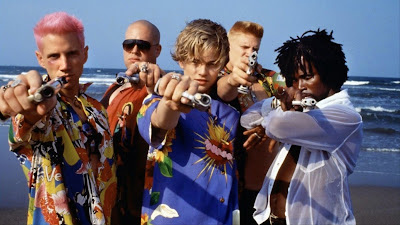 And on we go, through Juliet’s angel-winged debut, the Nurse’s (Miriam Margolyes) cheeky protestations, and Friar Laurence’s (Peter Postlewaite) well-intentioned — but ultimately disastrous — chemical experimentation. As objectionable as many of Luhrmann’s flourishes may feel to those of us who worship at the feet of the Western canon, the truth is that each one exaggerates something already inherent to the text. The director noted in interviews that his intention was to make the film that Shakespeare — someone who was “playing for three-thousand drunken punters” and whose “competition was bear-baiting and prostitution” — would have made as a modern director. Had Shakespere been given an opportunity to set the balcony scene around a swimming pool, he may have done so. Had Shakespere the means with which to stage Tybalt’s downfall as a game of vehicular chicken, he may have done so. Why do DiCaprio and Danes recite Shakespeare like immature teenagers? Because that’s what their characters are. 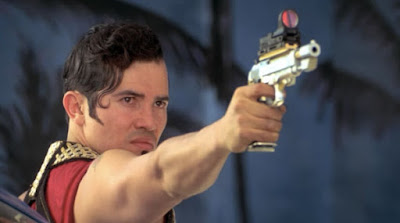 And while it’s perfectly fair to register these facts but still not sanction any of Romeo + Juliet’s buffoonery, it’s easy to see why Luhrmann’s brash and vulgar interpretation would appeal to a generation of people whose only exposure to Shakespeare’s brilliant work has been listening to a series of teachers like me bloviate at length about the science of soliloquies and iambic pentameter. Yes, the soul of Romeo and Juliet is in the text, but film and stage are vastly different media with different sensibilities, and a story as vibrant and enduring as this one deserves the biggest possible turbo-charge. Like so many others, it’s a cautionary tale masquerading as a seductive romp, and it deserves all the ache and wonder of Baz Luhrmann’s wildest, most sun-soaked fantasies. It’s about young love, after all, a force of nature strong enough to make us all certifiably insane. If you’re given the chance to bring something that universal to the screen, you take it, and if you’re given the chance to have a children’s choir sing “When Doves Cry” by Prince, you take that, too.
Posted by Patrick Bromley at 12:00 PM