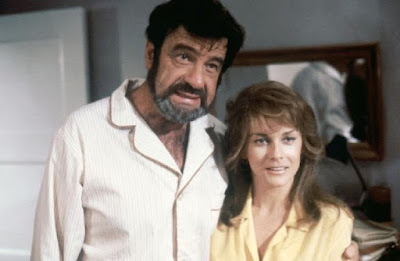 If we can't get real baseball then we'll settle for baseball adjacent movies.

When I hear the name Walter Matthau, I immediately think of his longtime friend and frequent co-star Jack Lemmon, with whom he appeared in 10 films. The second name that comes to mind is the brilliant writer of stage and screen, Neil Simon. In Matthau's lengthy and storied career he appeared in six Neil Simon works, starting with The Odd Couple in 1968 (with Lemmon), then the original adaptations of Plaza Suite and The Sunshine Boys, followed by California Suite, I Ought to Be in Pictures, and finally, and unfortunately, The Odd Couple II in 1998. Matthau and Simon go hand-in-hand. 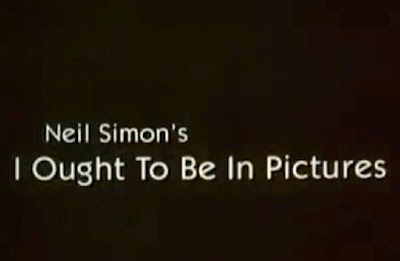 In Simon's script for I Ought to Be in Pictures, based on his play from 1980, Herbert Tucker is a screenwriter living in Hollywood whose estranged daughter shows up one day out of the blue. Directed by Herbert Ross, IotBiP co-stars Dinah Manoff as Tucker's daughter, Libby, a Brooklyn born and raised 19-year-old with dreams of becoming a movie actress. Libby hasn't seen her father since she was a little girl and hopes to A.) get to know her father and develop a relationship with him; and B.) use his contacts to get a head start in the movie business. The film opens with Libby brazenly walking up to the caretaker of a cemetery and asking where her dead grandmother is buried. After locating the site, Libby talks to the gravestone and says she heading out west to become a movie star. IOtBiP came after Mannoff appeared in Grease as Marty and a recurring role on the series Soap in 1978, and as Karen in Robert Redford's best picture winner Ordinary People in 1980. She's absolutely adorable, reigniting the crush I had on her from the Empty Nest days; tenacious, leaving handwritten contact information on the back of valet receipts at Hollywood parties, and forcing her father to speak with her mother and brother over the phone; and she matches Matthau's New York wit word-for-word, giving Jack Lemmon a run for his money as Matthau's best on-screen partner.

Also co-starring is the stunningly beautiful Ann-Margret, more than a decade before falling for Matthau again in Grumpy Old Men. As Tucker's once-a-week girlfriend, Steffy, she plays the quiet, patient, all-knowing, moral center to this story about a father and daughter trying to reconnect after almost 20 years. Steffy always offers a shoulder for Libby to cry on, and an ear to bend when Herbert is frustrated and confused. She deserves to be treated better than she is, but, as is the case with anything revolving around Ann-Margret, everything would fall apart without her. 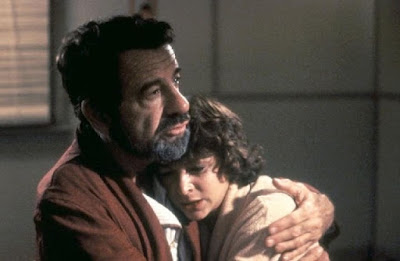 At first instance we're to believe Herbert is going to be a nose-in-the-air Hollywood elite, doing everything in his power to refuse entry into his life. But this is just an illusion created by our own preconceived assumptions. After all, it's Walter Matthau, the least nose-in-the-air human being I can think of. When Libby arrives at his house, Herbert is sleeping but Steffy lets her in before taking off, leaving Libby alone in the kitchen. Herbert wakes up and is understandably caught off guard, taking a few minutes to completely grasp the situation. From there he's unconditionally accepting of this young woman who's barged into his life, and while he may be a little standoffish (one-armed hugs, a peck on the cheek), it's not done with ill intent. This is a little jarring to his 19-year-old daughter, though, who expected to be fully embraced immediately with no awkwardness whatsoever. Libby starts to realize (with some frustrated cajoling from her father) that becoming a movie star or developing an unbreakable bond with another person simply cannot happen in a matter of hours or days or weeks. And when two hard-headed Brooklynites come to blows, even if the fireworks aren't the most bombastic, the soft-spoken, kind-hearted moral center comes in and works her way through the layers of stubbornness, and gets to the heart of the matter. Steffy's patience is remarkable, especially in a scene where Libby calls her mom and forces her father to speak to the woman he was married to but whom he hasn't spoken with for 16 years. Director Ross sets his camera up with Matthau and Manoff in the foreground, the awkwardness and tension of the moment being the focal point. But what caught my eye was Ann-Margret, arms casually folded, leaning on the door jamb, head tilted, and smiling. She's lovingly watching a man with the exterior of a boulder but the heart of an elephant grow; the man she loves showing his vulnerability in front of his daughter, his girlfriend, and his ex-wife. It's one of the sweetest moments in a movie filled with them. 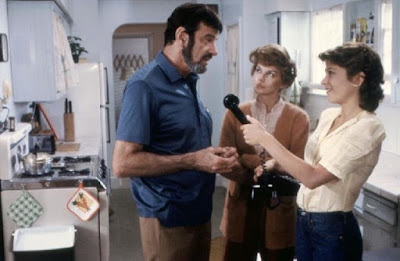 As I start to wind down this column it's nice to come across a charming movie that left me smiling. A few tears were shed but for no other reason than because I was happy, and in a cynical world where we tend to watch cynical movies more often than not, something as charming as I Ought to Be in Pictures was a bright spot that will keep on shining.
Posted by Patrick Bromley at 5:00 AM

Email ThisBlogThis!Share to TwitterShare to FacebookShare to Pinterest
Labels: 1982 movies, 52/82, ann-margaret, i ought to be in pictures, walter matthau