AMERICAN BUFFALO: From Stage to Screen 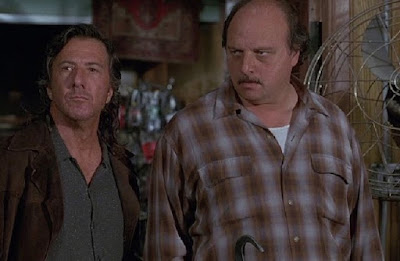 I suppose that's easier in a movie compared to a play. But when you have a writer like David Mamet, all you want is the “tell” portion of the idiom. In his play American Buffalo, my favorite in the Mamet compendium of writings, the dialogue bears down on the audience at a Chayefsky clip; the sheer amount of words and the speed with which they are delivered will cause heart palpitations. I don't partake, but I assume you get the same feeling when imbibing in cocaine as when you experience a Mamet. If my limited consumption of his interviews and non-fiction writing is any indicator, this is Mamet's intent. He is a masochist. His motive in writing is to kill the viewer or reader. If said consumer doesn't walk away from a Mamet script with at least one pulmonary embolism, he has failed. 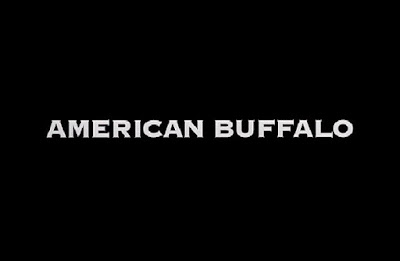 This, too, is part of the actor's job when performing a Mamet. Only a special breed of performer can stand up to the material and deliver it in such a way that leaves the viewer in a state of trauma, in turn giving the author pleasure in the melee. If the actor fails to affect the audience in such a way, then the actor has failed and, ispo facto, the writer has failed, leaving the actor begging the writer for mercy. I write this as if David Mamet is an evil dictator and wishes nothing less than the fall of humanity. This may be true; I don't know the man. But someone who almost always takes a cynical if not nihilistic viewpoint of the world is, in fact, a scary person. Does this mean I love David Mamet as a human or artist any less? Of course not! I may love him even more because of it!

Most known for his play Glengarry Glen Ross and the film adaptation for which he wrote the screenplay, David Mamet takes a hard look at humanity and the people that float and survive just beneath the surface where you and I go about our days. In Glengarry Glen Ross, he uses real estate salesmen to show how everybody is out for themselves, that empathy is a waste of time and energy, and that you must “always be closing.” In Oleanna, a student and her professor show us that those in power will always be trying to take advantage of people, but also be careful who you fuck with. In American Buffalo, greed is on full display with a heavy dose of anger. And in most of Mamet's works, men are gigantic pieces of shit. Most days I go about my life with a fairly sunny disposition: people are generally good; life is worth living; love is always the answer. This is not the approach Mamet takes which, in my opinion, makes for excellent entertainment. 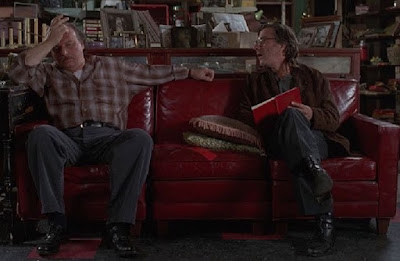 When I watch or read a Mamet play I always walk away thinking I want to act. I want to talk like his characters. I do not want to use contractions because why combine two words when you can say each individually. What little anger I possess I want to release it through reading his words aloud in front of an audience. “I went out on a limb for you! I put my dick on the chopping block!” I don't talk like that, but I'd like to. But then I think about the amount of dialogue I'd have to memorize. I can't remember what I wrote about last week, but I'm supposed memorize 10,000 words and then say them in front of people?

American Buffalo, like most Mamet plays, is centered around a very small cast – in this case three men – and primarily takes place in a single location – in this case an antique store. The cast is comprised of Dennis Franz as Don, our shop owner; Dustin Hoffman as Teach, our angry instigator; and Sean Nelson as Bob, the kid who Don looks after and just wants to be included. Directed by Michael Corrente and with a screenplay by Mamet, the centrally-located story already feels claustrophobic due to Mamet's dialogue, but now 90% of the film takes place in an antique shop where lamps and clocks and rusty hooks and furniture and instruments look as though the walls themselves are constructed from junk. Narrow corridors are formed by desks and televisions and magazine racks, just wide enough for a human to slink through. Numerous flat surfaces give actors plenty of places to sit, in turn acting like a totally separate room among the flotsam and jetsam. Like all things Mamet, the actors never ever step on each other's lines. The patter between Franz and Hoffman and Nelson, like Pacino and Baldwin and Lemmon in Glengarry, has a unique gait only achieved through the words of Mamet. Nelson's innocence, Franz's annoyance delivered through his heavy Chicago accent, and Hoffman's boiling ire make American Buffalo stand out among the big blockbusters and interesting independent films of the mid-'90s. 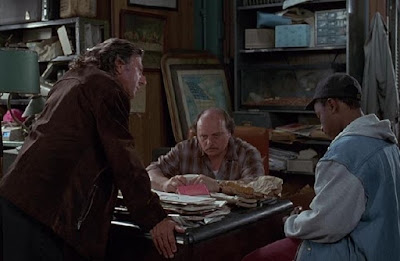 The whole plot of American Buffalo is quite simple, again, as is usually the case in a Mamet script. Don hears of a man who has a collection of rare coins, purportedly worth a lot of money. Bob has worked as Don's lookout and snoop, feeding him information. Along with another friend, Don will simply break into this guy's house, steal the coins, and split the take with his partner. Teach, though, is the loose cannon and friend of Don who forcefully inserts himself into the plan. He gets inside Don's head and concocts scenario after scenario of things that could go wrong, feeding the paranoia that lurks in the shadows of the brain, and Don becomes convinced this simple smash and grab no longer possible without Teach. As day turns into night, complications arise, tempers flare, and things fall apart. The anger is palpable. Hoffman almost never stops moving, and when he does he's still fussing with his perpetually wet mullet. Franz, as he did on NYPD Blue (which was being shot at the same time), is constantly battling his emotions, struggling to tamp them down so he doesn't explode and do something he'll regret. If nothing else, the amount of cigarettes these two smoke will indicate how much they're under. Like life, there isn't really a conclusion to American Buffalo. There's no happy ending, no sad ending. Life goes on and sometimes – most of the time – the shitty people go on, too.
Posted by Patrick Bromley at 5:00 AM