Movies is Good: WAITING FOR GUFFMAN 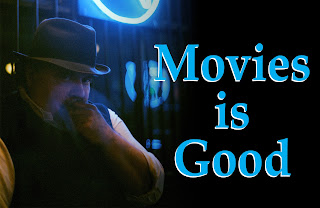 Besides giving us all of the other sweet, sweet films you have read about here all week, 1996 also gave us the first of Christopher Guest’s string of wonderful mockumentaries.

I’m not counting 1984’s This Is Spinal Tap, of course, which was co-written but not directed by Guest. I would also argue that Waiting for Guffman is much more the blueprint for Guest’s future work than Tap. This could be argued. “I know, I know,” I am constantly saying to the rockumentary’s loyal fans, “I know Spinal Tap goes to Eleven.” 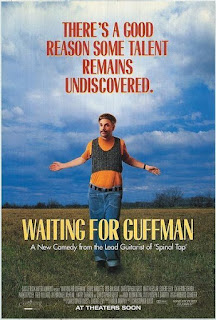 Waiting for Guffman is so funny in so many different ways that it’s a little difficult to write about it. Some highlights stand out: 1) all of the references to Corky St. Clair’s wife Bonnie, who no one has ever seen, 2) the famed restaurant scene where Ron Albertson discusses his recent surgery, 3) Allen Pearl’s lazy eye, 4) the epic musical number “Stool Boom,” and 5) Corky’s tantrum when told that the town of Blaine cannot possibly afford to spend $100,000 on his production. Corky calls the village board “bastard people,” in a scene that has become a popular internet meme. 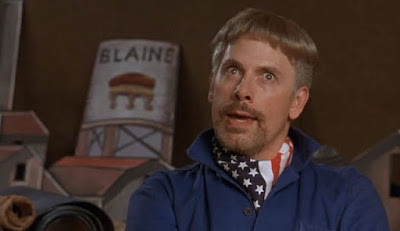 Equally impressive is the fact that, save a detailed outline written by Guest and Levy, the entire film (except for its musical numbers) was improvised. Guest shot 58 hours of footage and then spent 18 months whittling it down to 84 minutes. Eugene Levy speaks of an early cut that did not feature Guest’s Corky St. Clair character at all! Director Guest cut himself out of his own picture. Although 84 minutes is a perfectly acceptable running time for a comedy, I wish that Guest had left in one musical number from his show within a show. “This Bulging River” is alternately funny and sweet, summarizes decades of “just okay” community theater, and features a tune that will stick in your head whether you want it there or not. It was included as a bonus feature on the DVD and can be found on the YouTube machine. Here it is!

Beyond the hilarity of this very talented cast and the twists and turns of its crazy narrative, the thing I like best about this film is its theme of artistic endeavors bringing people together. I was lucky enough to direct some shows at the high school where I used to teach, and I can say from experience that Kurt Vonnegut’s adage in his short story “Who Am I This Time?” is very true: “There isn’t any other way to get to know a lot of nice people faster than to be in a play with ‘em.”

I have such vivid memories of every show that I appeared in when I was in high school. I recently celebrated my Sixtieth birthday, and three people at that party were friends I first made in high school dramatics. We have now been friends for 46 years. Although I met my wife in high school, we didn’t start dating until she directed something I wrote at the Armory Free Theater at the University of Illinois. I first met our very own Patrick Bromley when he appeared in my Variety Shows when he was in high school. Theater brings people together. Sometimes, it’s like soldiers in wartime, going through hardships together. 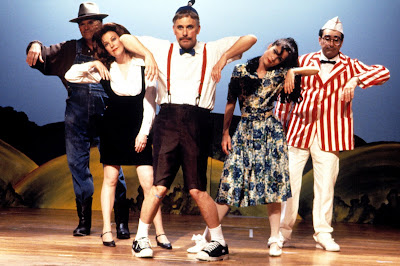 Twenty years ago, I played Bieberman in a semi-professional production of Bruce Jay Friedman’s Steambath. It was wonderful and horrible. Most of the cast had day jobs, but we all made it to the weekly Wednesday matinees. We suspected that the producer was putting the profits up his nose. Cast members started quitting before the run was over. Because of a stage direction in the play (and the proximity of a Bar Louie next door to the theater) I got to eat a tasty sandwich during every show. Good times. 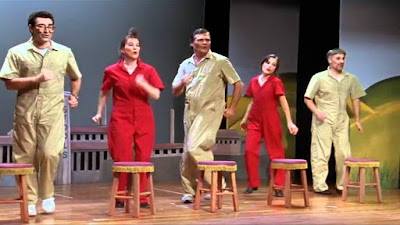 Theater is broadening. Whether you are in the audience or onstage, theater shows you sights and exposes you to emotions and ideas you might not have had otherwise. The genius of Waiting for Guffman is that as we laugh at the amateur theatrics of “Red, White, and Blaine,” Guest’s show-with-a-show, we get to know the cast and empathize with their frustrations, anxieties, and triumphs. Maybe that’s why so many “behind the scenes” movies work so well. All actors have been in these very situations and can convincingly play themselves.

Join us for a... unique... theatrical experience this Saturday for F This Movie Fest. There’s no other place I would rather be.
Posted by Patrick Bromley at 12:00 PM