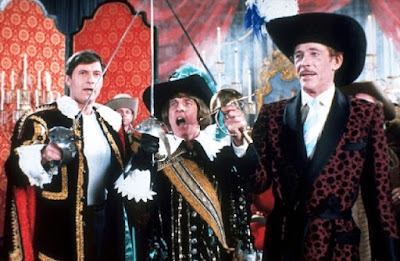 We love a mid-century period piece.

When I think back on the 12 previous months of my life, I see some really special moments. We took an amazing family vacation to the Outer Banks; my two boys grew another year; I developed some really special relationships. Most importantly, though, and tangentially related to this film, I got sober and joined Alcoholics Anonymous. And on the movie front, this column, and these films have been a major highlight. Since the idea was birthed back in April of 2021, Richard Benjamin's My Favorite Year was always going to the final film of 52/82. I'd seen it before and knew this column needed to end with a film I loved. And so here we are. 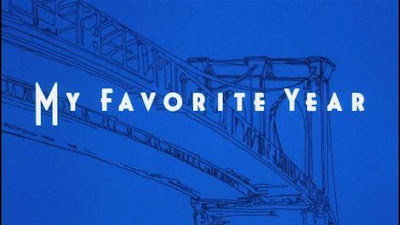 The film opens with Nat King Cole's dreamy rendition of “Stardust” as the title appears. We then get a voiceover of Mark Linn-Baker as Benjy Stone set against the bustling streets of 1953 Times Square (complete with a marquee featuring House of Wax). Stone is a writer for King Kaiser's Comedy Cavalcade, a sendup of Sid Caesar's Your Show of Shows. Enter the writer's room (think O.G. 30 Rock) with it's stereotypical, high-strung, neurotic head writer (an early version of Pete Hornberger). In fact, KKCC is filmed at Rockefeller Center, and in his opening narration, Stone refers to it as “30 Rock.” This week's featured guest is Alan Swann, a swashbuckling film star a la Errol Flynn (notice the double Ns) and notorious drunk. “Where is he?” “Where else? Drinking and humping.” Smash cut to Peter O'Toole in bed with a buxom blonde and another within reach in a stewardess outfit. King Kaiser is played by Joseph Bologna in a spot-on impression/homage of Caesar, whose hot temper and boneheadedness deliver laugh out loud moments every time he's on screen. The producer of the sketch show is played by Adolph Green, who, along with his writing partner Betty Comden, wrote some of MGM's greatest musicals, including On the Town and Singin' in the Rain. His assistant, and love interest to Benjy Stone, is played by the eternally gorgeous and hypnotic Jessica Harper. The story follows Benjy attempting to keep Swann sober during the days of rehearsal leading up to the live taping, and the antics of the characters surrounding the Cavalcade. (We also get a brief scene with Cameron Mitchell, his third appearance of this column!)

Upon this rewatch of My Favorite Year, I especially loved seeing two very different theatre actors work in tandem. O'Toole is a classically trained Shakespearean actor from England who attended the Royal Academy of Dramatic Art in the early '50s. Mark Linn-Baker is a comedic stage actor (he developed a two-man show with Lewis Black in 1980) who studied at the Yale School of Drama in the late '70s. These two men could not be more different, yet they are one of my all-time favorite on-screen duos. As moving as O'Toole can be (see Lawrence of Arabia) and as charming as he can be (see The Last Emperor), he is undoubtedly one of the funniest actors to ever grace the stage and screen. With his piercing blue eyes and soul-melting smile, Peter O'Toole as Alan Swann – no doubt a version of his self (read Hellraisers: The Life and Inebriated Times of Richard Burton, Richard Harris, Peter O'Toole, and Oliver Reed) – is an unforgettable presence sure to top anyone's list of favorite movie characters. Linn-Baker as Benjy Stone doesn't equal O'Toole's charm (how could you?) but is no less funny. Probably best known as Cousin Larry on the TGIF staple Perfect Strangers, Linn-Baker is playing a similar character but with a lot more Brooklyn Jew mixed in. Looking at O'Toole's and Linn-Baker's resumes at the time, this pairing shouldn't work, but it's absolutely perfect in my opinion. 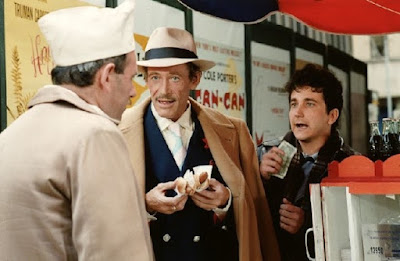 What a movie like My Favorite Year doesn't need is a deeply heartfelt hook. We've signed up for a young comedy writer babysitting a drunk Hollywood star. We want to see the hijinks leading up to the inevitable comedic clash of movie star and television star. We don't want a serious subplot to take away from the laughs. Despite our wants, and going against what this movie is putting forth, we do get a dramatic subplot involving Alan's 11-year-old daughter whom he hasn't seen for over a year. Granted, it takes all of two minutes before we're thrust back into the throes of hilarity, but damnit if those two minutes don't tug at my heartstrings. And by the time the film wraps, with the redemption we so wanted being granted to our Hollywood actor, tears of pure joy are streaming down my cheeks. 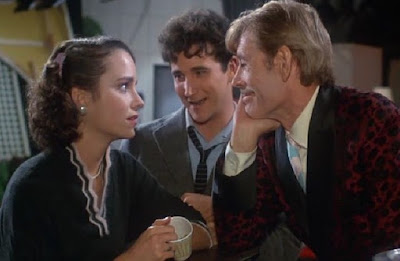 It's not often we get these types of warm blanket movies (see last week's essay on Tootsie), so when we do find them we hold them close and share them with anyone who cares to listen. This column deserves to go out on a movie like My Favorite Year. While I couldn't tell you exactly what 12 months strung together make for my favorite year, these past 12 have been pretty darn great, and by far the most important of my life. I will remember them fondly, as I do this film.
Posted by Patrick Bromley at 5:00 AM