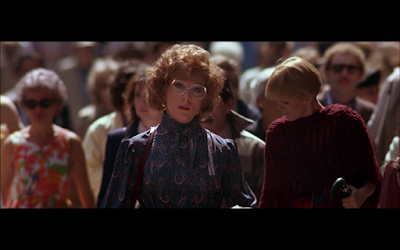 When I hear Dave Grusin's main title from his score to Tootsie, I'm immediately transported back to the late '80s at my aunt and uncle's house. They lived in a part of town where the water tasted better (city water as opposed to our disgusting well water), the air smelled like chemicals (thanks, pipe factory a block away), and the ever-passing trains never let silence last more than 15 minutes. In Deb and Phil's bedroom was a framed picture hanging on the wall – a blown up photograph of a Berlin street scene at night. And while the grown ups were playing cards or listening to Lou Reed albums out in the kitchen, us kids crowded on the water bed to watch Mannequin, Dirty Dancing, Shag the Movie, or Tootsie. The soundtracks to the first two movies on that list, and particularly “An Actor's Life” from Tootsie, take me back to those Friday nights when we'd shout to the grown ups to shut up because we couldn't hear the movie. 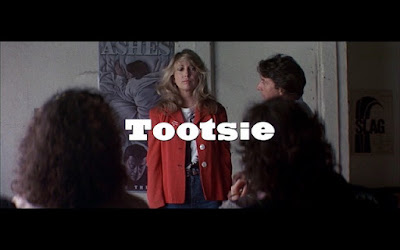 Such is the warm blanket that Tootsie is nowadays. Not just one song from score, though; the entire film (although the Tootsie score is still played at least a half dozen times every week in this house). During the montage of Dustin Hoffman's Michael Dorsey auditioning for faceless directors on generic New York stages he has an exchange of dialogue with a disembodied voice:

The inciting incident, thus spurring Michael Dorsey's transformation into Dorothy Michaels, a middle-aged, take-no-shit Southern lady who scores a regular role on a popular daytime soap opera. And aside from the voice, I'm a little ashamed to admit that this writer is slightly attracted to Dorothy. Difficult as he's reported as being in real life, Hoffman is undeniably one of my all-time favorite actors. His intensity is unmatched. When his scene partner goes big, Hoffman goes small; when his partner goes small, Hoffman goes big. Whether screaming his head off or croaking out words barely above a whisper, Hoffman always means business. When Dorsey schmoozes around to different women during his surprise birthday party, Hoffman ensures that we are squirming in our seats with the slime he's oozing. When he, now as Dorothy, stands up to Dabney Coleman as the soap director, we cheer him/her on as if we're watching the spirits of Dolly, Lily, and Jane from two years prior as they took a stand against Coleman in 9 to 5. Hoffman convinces us that what we're seeing – a man who is so desperate for acting work that he convinces everyone he's working with that he's a woman – is actually happening. We're left screaming: “WHAT IS THE END GAME HERE, MICHAEL?!?! Surely there is absolutely no positive outcome from this long-play charade.” While the script and supporting actors give a big assist, it's because of Hoffman and director Sydney Pollack that we're not just watching a piece of entertainment, but that we're enveloped into this story and these characters and, just like the soap opera in which Dorothy now co-stars, we can't peel our eyes away because we've now become parasocially involved with these characters. 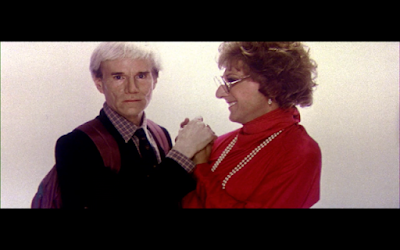 This is to say Tootsie isn't filled to the rafters with actors we love. It's overflowing, actually. The aforementioned Hoffman and Coleman are joined by Jessica Lange, Teri Garr (who, along with Bernadette Peters, was my first celebrity crush), Charles Durning, Bill Murray, Pollack as Michael's agent, George Gaynes, Geena Davis (in her first role), and Lynne Thigpen. These are all people I grew up watching in movies and TV shows like Mr. Mom, Stripes, Beetlejuice, Police Academy, Evening Shade, and The Muppets Take Manhattan. Maybe it's the sweet, sweet drug we call nostalgia, but there are few actors I can think of that have show up in movies in the past 20 years that bring me the comfort these people do. Tootsie is just one film and in every scene there are at least two actors that bring that warm, soothing feeling. 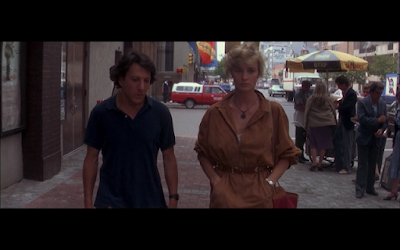 While it might have carried a women's-liberation-in-the-workplace message in 1982, for me Tootsie was and is purely popcorn entertainment. It truly is the warm blanket that I can put on to alleviate the stress brought on by life. From it's wonderful location photography on the streets of New York City, to Grusin's score, to the improvisational quality Hoffman brings (mirroring Dorothy's on the soap opera) in certain scenes, Tootsie is one of the few films that I want to watch again immediately after it ends. The funny thing is I feel the same way about Working Girl. Coincidence?
Posted by Patrick Bromley at 5:00 AM