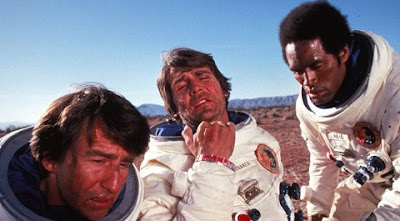 Welcome to the first installment of my new, one-installment column “Re-View Review,” in which I re-watch a movie that I watched once before and have been afraid to revisit for fear of disturbing the strange magic of my first viewing.

I’m not the only one who feels that way sometimes, right? 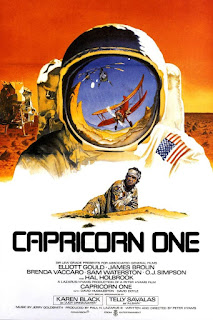 It’s June of 1978, I’m 15, and I’m probably still woozy from falling in love with Star Wars the summer before. I also have a low-key crush on James Brolin (aka Dr. Steven Kiley of TV’s Marcus Welby, M.D.) I’ve convinced my bestie Lisa to come to the movies with me, probably at the excellent and much-missed Woodfield 1 & 2 where I’d first seen Star Wars. I remember that we shared a bucket of popcorn and that some mean guy hissed his reprobation at me and Lisa for talking too much. (Hahaha! Oh Lisa, that’s so US.) The movie: Capricorn One.

I remember loving every minute of it, even the moment when Mean Guy snapped at us. It felt wonderful to be watching a new sci-fi thriller on a big screen (really, movie screens were HUGE back then) and hanging out/being troublemakers with my best friend, unchaperoned. I was often a moody, broody teen, but that night—for some unremembered reason—I felt free and happy in the dark, waiting for Capricorn One to begin. I was so invested in the film that, at the critical scene in which Sam Waterston (as astronaut Peter Willis) coughs out the teaser line above, I cried.

As time passed, however, I began to suspect that maybe Capricorn One was… not good? Like, it might be… dumb? I simply couldn’t risk soiling the memory of that first viewing by watching it again to find out.

Capricorn One is great, and I thoroughly enjoyed the re-watch. What a relief! To be clear: this movie is not Citizen Kane great; it’s “third movie at F This Movie Fest” great. Patrick, I KNOW you know what you’re doing… but if you ever decide to feature “Movies of 1978” at a future F-Fest, you have my nomination for Capricorn One.

I remembered James Brolin as leading astronaut/hunky rebel Charles “Bru” Brubaker, but I’d forgotten how terrific the rest of the cast is: Elliott Gould, Hal Holbrook, Karen Black (at her sexy Karen Black-iest), Robert Walden, and instantly recognizable “That Guy” David Huddleston. Who plays the third astronaut? O. J. Simpson! Writer-director Peter Hyams has joked, “O. J. Simpson was in it, and Robert Blake was in Busting [Hyams’ first feature]… Some people have AFI Lifetime Achievement awards; some people have multiple Oscars; my bit of trivia is that I've made films with two leading men who were subsequently tried for the first-degree murder of their wives.” 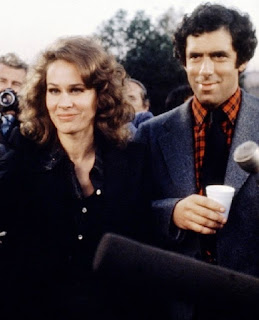 The premise of the movie is that, to avoid inevitable tragedy due to shoddy sub-contracting, NASA decides to fake the first manned mission to Mars. They coerce the astronauts’ complicity by threatening to MURDER THEIR FAMILIES in a plane crash (I love a ’70s movies that doesn’t pull its punches when creating a corporate villain.) The “fake news” undercurrent holds up remarkably well in our current political climate. The dialogue is generally crisp and very “listenable.” The film’s casting, performances, writing, and direction are all a cut above the plot, which sifts through your fingers like the red Martian dust if you try to dig too far below its surface.

Capricorn One is crammed with some of the best movie tropes the 1970s had to offer: an excellent (albeit one-car) car chase; a plucky reporter (Elliott Gould) who knows too much for his own good; a “highly respectable” corporate bad guy who values profit over human life (of course Bru’s children refer to him as “Uncle Jim”.) Everyone smokes. It ends abruptly with a freeze-frame—this is 1978, we don’t need a fucking denouement! The score is so completely on-point as “1970s Action Music” that it transcends its own mediocrity and achieves a sort of bombastic perfection. As NASA’s Dr. James “Uncle Jim” Kelloway, Hal Holbrook delivers a fantastic monologue explaining the scheme to the astronauts that should be anthologized in textbooks. Here it is, with French subtitles for our more Continental readers. Do yourself a favor and memorize it for parties:

As I said, the plot defies credibility (sure, I’ll believe that our government faked a Mars landing, but there’s no way a reporter already being followed by the FBI could just waltz onto an unguarded abandoned military base and IMMEDIATELY find The Big Clue. At least make him WORK for it.) Yet somehow, Capricorn One still really worked for me. It has James Brolin sucking on a raw snake belly, and I’m here for it.

Now, what about you guys: any F-Heads out there with movies that they’re afraid to re-visit?
Posted by Patrick Bromley at 11:42 AM