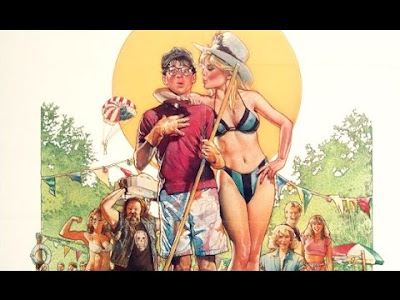 I haven't abandoned the project. I still feel the Need.
With the passing of Sally Kellerman a few months ago, it seemed like the right time to take a Need for Tweed look at Meatballs III (aka Meatballs III: Summer Job), in which Shannon Tweed has a small supporting role as a character called The Love Goddess.
Meatballs III: Summer Job (1986, dir. George Mendeluk)
Patrick Dempsey (in his first role, hence his "introducing" credit) plays nerdy Rudy Gerner -- for those of you paying attention, that's the same name as the Chris Makepeace character in the original Meatballs, but the connections start and stop there -- hired for a summer job at Mean Gene's Bar and Grill at a river resort. All Rudy can think about is sex, so it's a good thing he's visited by the ghost of recently deceased porn star Roxy Dujour (Kellerman, playing a contemporary adult film actor like a fast-talking, glamorous starlet of the 1930s), who takes it upon herself to help him lose his virginity so she can be admitted to heaven. This is the plot of a movie.
Tweed's character is alluded to throughout the movie as the mysterious wife of Mean Gene, holed up in her second story bedroom like a princess in need of rescuing from her tower. She only appears in the last 10 minutes when some guests of the resort make a bet about who can have sex with her. Somehow Rudy ends up in her bedroom at the same time and wins her over by not trying to fuck her, instead learning that she's studying for her PhD and that her husband is away teaching summer school (Mean Gene is actually her brother). So moved is the Love Goddess by Rudy's chivalry that she helps him simulate noisy sex so everyone at the resort thinks he finally got lucky. His reputation restored after a summer's worth of embarrassment, Rudy leaves his summer job a full-blown stud and finally winds up with the only girl who has liked him all along. 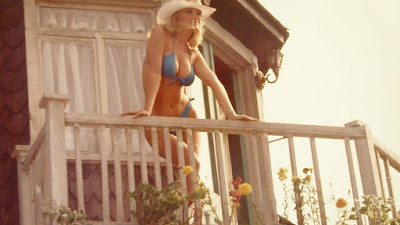 As a movie, Meatballs 3 is probably better than some of the other Tweed movies I've watched, but only because I have an extremely high tolerance for shitty "raunchy" comedies in which the humor is pitched at the level of a Troma movie (the big laughs usually involve someone getting hit, crossing their eyes, and then falling into a lake). As a Tweed vehicle, however, I have to rank it lower because she's little more than a cameo -- it's the kind of role so often reserved for Playboy Playmates looking to make the jump to acting. Though her screen time is limited, she's demonstrates some good comic timing and gets off at least one super-Canadian "sorey," which is adorable and not something we hear from her in later films. I like her in the movie. I just wish she was in it more.
Rating: 5/10
Scandalous Behavior (1999, dir. James Hong) 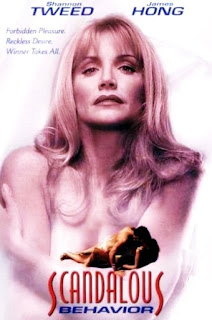 1999's Scandalous Behavior (aka Singapore Sling) is noteworthy not just for being one of several projects Tweed made that year, but also for being one of only a few movies ever directed by legendary character actor James Hong, who has been acting since the 1950s and currently has 450 credits on his IMDb page. Though best known for his onscreen performances in stuff like Seinfeld and Big Trouble in Little China, Hong did direct a handful of sexploitation movies in his earlier days (and one X-rated film, Hot Connections, under the name James Young in 1972) and comes by his bonafides to direct Scandalous Behavior honestly. Would that he had made a better movie.
Essentially a goofy episode of the '80s drama Dallas with some softcore sex scenes sprinkled in, Scandalous Behavior centers Michelle (Rena Riffel of Showgirls fame), a young woman who escapes a prison sentence in Singapore by marrying a wealthy businessman (Hong). She runs out on him and flees the country to Dallas, where she reunites with her ex, an oil tycoon and one half of the Tanner brothers who is now dating Shannon Tweed. James Hong follows her to Dallas and gets into business with the  brothers. There is some sex and some double crossing and then the credits roll. 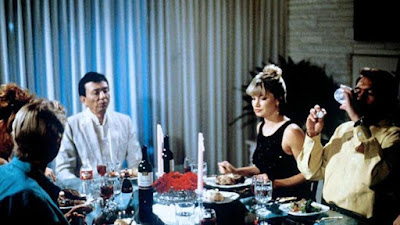 As much as I love James Hong as a character actor, I can't say he's the best director based on just this movie. The narrative is flabby, the tone weird and inconsistent. I know these are strange criticisms for what will essentially be dismissed an excuse for nudity, but we have to take these movies on their intended terms if we're going to talk about them at all. Besides, that's reductive: yes, nudity is a staple of much of Tweed's filmography, but I do believe that everyone comes to every one of her projects looking to make a real movie that happens to incorporate eroticism, not the other way around. On the plus side, Wong seems to be having a good time both in front of and behind the camera, which certainly counts for something. Like in three of the four movies I've watched for this exercise thus far, though, Shannon Tweed is sidelined for most of the runtime, showing up early on for some spirited sex before disappearing for most of the film. The payoff is mildly rewarding, but I'd be lying if I said I didn't want more Shannon Tweed in my Shannon Tweed movies.
Rating: 4/10
The Ranking So Far
1. Electra (1999)
2. Meatballs 3 (1986)
3. Stormy Nights (1999)
4. Scandalous Behavior (1999)
Posted by Patrick Bromley at 5:00 AM