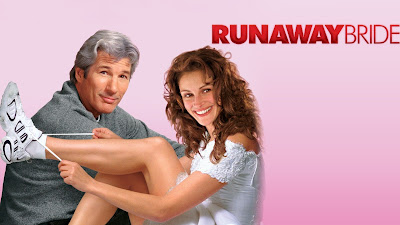 A new series where I finally watch a movie that I’ve always meant to see but haven’t until now.

The Summer movie season in 1999 was incredible. It was an especially good summer for horror (and horror-adjacent) films with choices like The Mummy and Lake Placid. But in late July and early August, we were especially spoiled with Deep Blue Sea opening on July 28th, The Blair Witch Project expanding nationwide on July 30th and The Sixth Sense making its debut on August 6th. I was in horror movie heaven. Hell, even the maligned The Haunting remake was out in theaters at the time. I bought a ticket for it and snuck into a sold-out screening of The Blair Witch Project! Another movie opened on July 30th (at #1) that under most circumstances I probably would have seen but didn’t – Garry Marshall’s Runaway Bride, which was notable because it re-teamed the director with his beloved couple from 1990’s Pretty Woman: Julia Roberts and Richard Gere. I was too enamored with horror to muster any enthusiasm at the time and so despite a good run in theaters and hundreds of copies in stock while I was working at Blockbuster Video, I never saw Runaway Bride. It became a movie I figured I’d get to someday but never knew when. Like in Summer 1999, it was never going to be my first choice for a movie I had to watch right now.

I had a few cocktails and finally sat down to watch Runaway Bride. Is it as good as Pretty Woman? No. Is it as good as I wanted it to be? Better. I miss movies like Runaway Bride that are built on the chemistry of two movie stars. The plot is functional on purpose because the heat comes from the performers. I’ve always liked Julia Roberts, but outside of the early 1990s I can’t say I’ve ever been a huge fan, and yet I sort of fell in love with her a little in Runaway Bride. There’s a scene where she’s trying on a wedding dress and asks for Richard Gere’s opinion of it. He says she looks fine. She replies that he’s reading his newspaper upside down so she must look better than “fine.” The way she delivers the word fine, coupled with how stunningly beautiful Julia Roberts is in that dress, was almost distracting. I’d had this happen a few times earlier in the movie when I saw Sela Ward and Rita Wilson in the opening scenes and thought “Why is everyone in this movie so damn good looking?” Was everyone at their hottest in ’99?

Since 1999, I’ve become a much more of a Richard Gere fan. He’s like if slippers were a person. He’s really fun in Runaway Bride. The chemistry he has with Roberts is delightful. They feel very playful together, which makes their banter and rivalry enjoyable for the first 90 minutes. Then, with 30 minutes left in the movie, something happens, and I was thrilled. Instead of the film following the usual rom-com clock where the couple doesn’t get together until the final scene, Runaway Bride stops and says Roberts and Gere’s attraction to each other is so undeniable that they need to be a couple right damn now! The way it happens in the movie (and the headlong consequences of their choice to make out in front of Roberts then-fiancée (played by Christopher Meloni)) is really exciting. While still a formula movie, the way Runaway Bride goes about it is at odds with the usual romantic comedy trajectory. That is spoiled a little bit 15 minutes later when the movie introduces a late-third act reason to keep Gere and Roberts apart, but man for about 15 minutes this movie is just a love story in love with these two people being in love and it's intoxicating. It makes the entire movie worthwhile even if the entire thing isn’t a success. 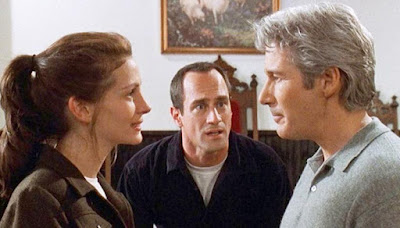 I’m glad I finally watched Runaway Bride. It has Larry Miller (who makes me laugh like Bill Murray makes everyone else laugh), Hector Elizondo (the biggest mensch in cinema history) and glamour shots USA Today (a paper, according to this film, that seemingly everyone in the USA reads cover to cover every morning). But at the end of the day, it’s Roberts and Gere doing their thing and that’s money in the bank. Runaway Bride (while not as good) reminded me of Tom Hanks and Meg Ryan in You’ve Got Mail. The stars were a little older and fully aware this was trying again to capture lightning in a bottle, but the charisma of two movie stars couldn’t be denied and easily sustained another outing.
Posted by Patrick Bromley at 5:00 AM