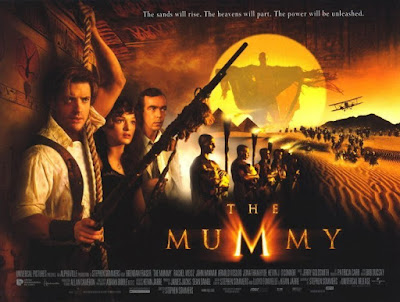 Sommers time in the summertime!

I love movies that open summer movie seasons. It’s one of the prime spots on each year’s film calendar, lending the film(s) premiering that weekend a certain amount of cinematic gravitas. They lay down the gauntlet, hopefully setting the tone for a high-quality summer movie season about to unfold. Marvel (or Sony-Marvel or Fox-Marvel) has claimed the opening day slot every year from 2007 to 2019, but before that there were outliers like 2006’s Mission: Impossible III, 2004’s Van Helsing, and 2000’s Gladiator. The weirdest year was in 2005, when the summer season opened with a trifecta of Crash, Kingdom of Heaven and House of Wax. Those three fail the Slurpee Test. But the first one (where we began counting the first weekend of May as the start of the summer movie season) belonged to The Mummy in 1999. I can hardly think of a better choice to start a summer movie season than The Mummy (1999). It’s summer movie incarnate. It’s everything I want out of a summer movie. All summer movies should be compared to The Mummy. It keeps you wanting to go back for more summer movies. 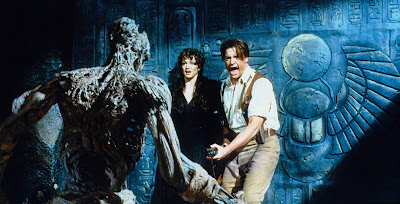 The Mummy (1999) contains very few marketable elements in 2019, so it feels like a charming time capsule. The main exception is Rachel Weisz, who had Chain Reaction and a few indies under her belt in 1999, but her tremendous, plucky performance in The Mummy launched her into an in-demand and award-winning actor ever since. Other than her and being part of the timeless Universal Monsters banner, most everything else in this film was of the moment. The lead, Brendan Fraser (terrific here, balancing action and comedy), was at the height of his popularity around this time. Writer-director Stephen Sommers was getting his first big-budget project after mid-tiers like The Jungle Book (1994) and Deep Rising, and he employed a cast of character actors in supporting roles that were prevalent primarily in the mid-to-late '90s, such as John Hannah (Four Weddings and a Funeral, Sliding Doors), Arnold Vosloo (Hard Target, Darkman II and III), Jonathan Hyde (Richie Rich, Jumanji, Anaconda), and Kevin J. O’Connor (Lord of Illusions, Deep Rising). The Mummy (1999) is also a film at the crossroads of the (then) modern blockbuster.

A joy of watching this version of The Mummy in 2019 is seeing a mix of practical and visual effects, often within the same scene. By 2019, most action films predominately choose one or the other, with practical effects now being a badge of honor for authenticity. The Mummy (1999) very much was pushing the envelope of modern visual effects, but it picked its moments, too. It was there to amplify the action or enhance the practical elements more than create a digital world entirely, which we’d see happen just two years later in The Mummy Returns. The Mummy (1999) was also the capper to a certain retro summer blockbuster trend that was popular in the 1990s. It’s very much in the grand adventure spirit of films like Dick Tracy, The Rocketeer, The Shadow, and The Phantom; it’s a great aesthetic that’s lacking in current blockbusters. I mean it in a nice way when I call The Mummy (1999) quaint, because one of the things I appreciate about it is it has several sequences where the movie just sets up camp, literally and figuratively. I love that the movie slows down and has breathing room, so we get to know main and minor characters enough where we understand their personalities and feel their fate has consequence. Plus, the action is shot beautifully, with Sommers having a good eye for framing and spacing. The film is busy but never exhausting or hard to follow during the set pieces.

So, what’s The Mummy’s legacy twenty years later? It’s a movie that has persevered to become a modern action-adventure classic in my eyes. Though probably started as a calculated pitch following several failed attempts to get The Mummy property off the ground (i.e. “What if Indiana Jones had an adventure with The Mummy”), Sommers found a way to blend action and horror together with ease and style that hasn’t since been surpassed whether in The Mummy Returns, The Mummy: Tomb of the Dragon Emperor, The Mummy (2017), or even Sommers own Van Helsing film. With each one of those limp examples, the charms of The Mummy (1999) are elevated. You know what also elevates the film? It has a fantastic theme park ride. I’m happy that exists in part because it keeps The Mummy (1999) in the collective consciousness of people visiting Universal Studios theme parks every day. The Dark Universe was a non-starter recently, as Universal attempted rebooting the classic Universal Monsters as an action-focused shared universe and now Blumhouse Productions hopes to re-energize these beloved icons by taking things back to low-budget horror. I hope it works out. Dusting off the cobwebs can work if the right people give a familiar property a new spin. Case in point? The Mummy (1999).

In closing (because I’m a huge dork), here’s my ranking of the last 20 years of movies that kicked off their summer movie season - from least favorite to favorite: