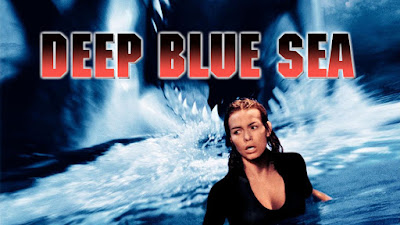 I’ve come to realize that Deep Blue Sea is a perfect B-movie. I didn’t always feel this way. I remember seeing the film on opening night and being underwhelmed. Then The Blair Witch Project came out days later and I really felt underwhelmed by Deep Blue Sea. I expected it to be more elevated or serious than it was. I blame HBO First Look, which tended to make movies feel more consequential than they were. I had unrealistic expectations that night in July 1999 thinking Deep Blue Sea was trying to challenge Jaws. Since then, my expectations for shark movies has shifted. No longer do I need a shark movie to try to fight in Jaws’ weight class because that’s impossible. Now I want every shark movie to strive to be the second-best shark movie ever made. The silver medal shark movie to me is Deep Blue Sea, with 47 Meters Down and Open Water behind it (sorry to fans of Jaws 2 and The Shallows). The odd thing is, on this watch, I realized I love Deep Blue Sea more because it’s a disaster movie more than a shark movie. 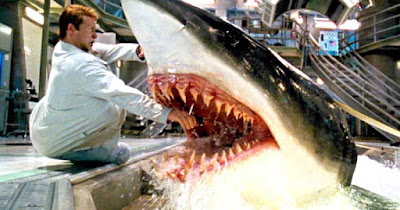 What Deep Blue Sea has going for it is Renny Harlin. He was the right director for the material because he could take a B-premise and inject it with A-production value (besides the CGI of course). I miss Renny Harlin. I know he still directs (he made a Hercules movie starring Kellan Lutz), but it’s not the same. Renny Harlin was a big-ticket director for a while. Looking back at A Nightmare on Elm Street 4: The Dream Master, Die Hard 2, Cliffhanger, The Long Kiss Goodnight, and Deep Blue Sea, it makes me appreciate the professionalism and sense of fun he brought to genre cinema. It’s understandable why he fell out of favor (you can’t get infinite chances when your movies consistently lose studios tens of millions of dollars), but it’s a bummer because this type of action craftsman director is less common nowadays. I’ve heard Deep Blue Sea called a smart-dumb movie, which is a terrific description. This is an alchemy that’s difficult to perfect. If you veer too far into a wink-wink dumb movie, you seem disingenuous. I think the key to making a good, smart-dumb movie is sincerity in the silliness. When you have a shark in a tornado getting killed by a chainsaw, you’re not being sincere. When you have [SPOILER] your biggest star (Samuel L. Jackson) being killed off at the halfway point during an inspirational survival speech, you’re being sincere in your silliness. [END SPOILER] The difference is you didn’t just stop at “Wouldn’t it be cool if…?” but instead had that moment serve the rest of the story. 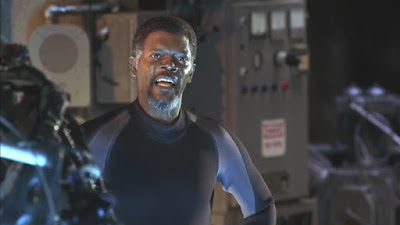 As in disaster movies, the ensemble cast goes a long way to making Deep Blue Sea work. Once Samuel L. Jackson is out of the picture, it’s really a free-for-all because the biggest star left is LL Cool J, and this is still during the time in horror where the African American character and the comic relief usually didn’t make it to the end of the movie. Here he’s both. Other than LL Cool J, we have Saffron Burrows, who wasn’t a star and playing the “mad scientist who must pay for crimes against nature” role, so you know she’s doomed, Michael Rappaport, who is no one’s hero and possibly from New York, Jacqueline McKenzie as the scared person who you know for sure is going to get eaten by a shark, and some dude named Thomas Jane, who was best-known from one or two scene roles in Boogie Nights, The Crow: City of Angels, Face/Off, and Buffy the Vampire Slayer. And guess what? It was Thomas Jane’s time to shine. This was his Home Run Derby moment, where he went from guy you kind of recognized to dude who got a showcase opportunity and just kept hitting the ball out of the park. Before Deep Blue Sea, people would ask “What is the measure of a man?” and that would be a philosophical question. After Deep Blue Sea people would ask that same question but the answer was “Thomas Jane.” On this recent watch of Deep Blue Sea, I honed in on how effortlessly cool Thomas Jane was compared to LL Cool J’s effortful cool. If you break it down, LL Cool J gets the comic relief bits, kills two of the sharks, and raps two songs on the film’s soundtrack. Thomas Jane doesn’t crack jokes (his voice won’t allow for comedic timing), he rides the sharks but doesn’t kill them, and he doesn’t sing. And he’s still this film’s ultimate badass. Why? Because he’s in it for us (dude saves people) and not in it for himself (which LL clearly is). Ladies might love “Cool James,” but only because they haven’t met Tom Jane. This guy is fucking great is my point. If you disagree, I sincerely apologize that I don’t care. 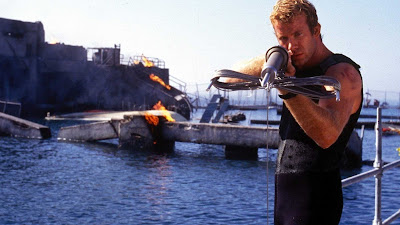 Deep Blue Sea is constructed with each new set-piece ratcheting up the tension in clever ways. Some moments are tense because of the shark (e.g. LL Cool J having to evade a shark’s jaws by jumping into a two-leveled oven, Stellan Skarsgard being thrown through a window by a shark) and others are tense for their disaster movie trappings (such as flooding, fires, helicopter getaways, etc.). The direction by Renny Harlin is playful. He likes the characters enough to allow a couple of them to survive, but he’s got that instinct of messing with them, so you get to like them and feel they really earned their survival by the end. It helps the stakes, too, that throughout the course of the movie you get a sense of space for the underwater facility where the film is set. I also appreciate how the movie pays homage to the Jaws franchise by killing its three sharks in roughly the same way as the sharks in Jaws, Jaws 2, and Jaws 3-D. It’s on the nose in hindsight, but it doesn’t occur to me as I’m watching the movie. 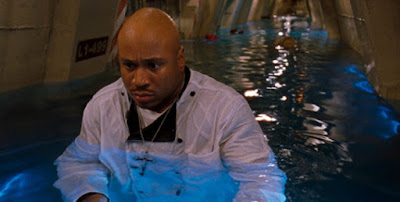 So, what’s Deep Blue Sea’s legacy 20 years later? I think people will realize it’s good in a way they didn’t in 1999. It’s become a cult favorite/guilty pleasure, but maybe too ironically when it’s solid unironically. The film is elevated by comparison with what came after it. It’s better than The Meg, Sharknado, Shark Night, Deep Blue Sea 2, etc. because there’s a level of professionalism and/or sincerity that’s absent from those other movies. The opening scene of Deep Blue Sea makes me laugh every time I see it. A double date of twentysomethings is frolicking on a boat, listening to slow jams on a boombox. At one point, one of the guys said, “We’re having a party!” to the others as if they didn’t know and it needed to be said. It’s stupid, and that’s why I laugh, but it’s also endearing because the movie’s telling the audience at the jump to sit back and enjoy themselves, shitty CGI sharks and all. Now I want to watch Lake Placid and keep this ‘99 Creature Feature train rolling.