Ladies Behind the Lens: SMITHEREENS

Certain movies have a smell.

Please join me in welcoming our new contributor, Rosalie Lewis! Rosalie is a writer and film lover here with us in Chicago and we're thrilled to have her as part of the F This Movie! family. - Patrick

Susan Seidelman’s 1982 debut Smithereens smells like cigarettes, stale pizza, cheap booze, and the hot metal of subway cars screeching against the rails. But mostly, like New York itself, it smells like possibilities. Like a chance for reinvention and salvation from the ultimate fate of being average.

We first meet Wren (Susan Berman) as she’s snatching a pair of checkered sunglasses from an unsuspecting woman. She’s not asking for permission, she’s just taking what she sees as rightfully hers and running headlong into the unwritten future. A few scenes later, when she skips the line at the Peppermint Lounge and hollers “I’m on the guest list” to the skeptical bouncer, we get the distinct impression that’s not true; it's just another case of Wren taking matters into her own hands. She looks the punk rock part: fishnets, vinyl houndstooth skirt, aforementioned sunglasses, silver shoes, a necklace that holds her bright red lipstick, and she carries herself with a “fake it til you make it” determination. Her day job in a copy shop allows her the chance to make fliers featuring her face, which she plasters up everywhere -- an early '80s precedent to being an Instagram influencer, perhaps. 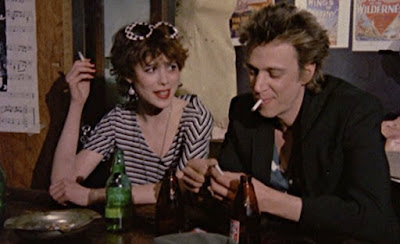 Paul (Brad Rinn), a young guy from Montana who lives in a van (not Down By the River, in this case, but by the West Side Highway), falls into Wren’s orbit and under her spell. Meanwhile, she’s much more interested in washed up punk singer Eric (portrayed by real life punk singer Richard Hell). I’m not sure, but I don’t think there are many other movies where the love interest options are a guy who lives in a rat-infested East Village flat and a van-dwelling painter who keeps getting hassled by the local pimp.

I won’t go much further into plot description, such that there is, but I do want to share a couple of my favorite moments in this glorious movie. Eric brings Wren back to his place and as they stumble giggling through the door, he says, “Careful, you’re gonna wake up the rats!” The next moment, he’s grabbing her a beer and we get to see the contents of the fridge: A lone slice of pizza laying uncovered on the top shelf.

Another scene I love occurs when a prostitute knocks on the window of Paul’s van, offering sexual favors in exchange for sitting in the warmth for a few minutes. He declines the sex but lets her come in and warm up anyway, and the two of them have a lovely exchange that cuts through the pretense and lets them both just be human for a while. It’s also the moment where we realize that everyone in this movie (and maybe everyone in this city) is willing to exchange some piece of themselves, expose some vulnerability, for the chance to get out of the cold for a little while. Is every relationship transactional? This movie doesn’t provide an easy answer, but it gives us a lot to ponder.

The film, shot on 16mm, feels like a time capsule of a very specific New York. Much like Wren, Seidelman had moved to the city in her early twenties in hopes of joining the scene. She had $20,000 when shooting began, and cast people with little to no acting experience who would accept deferred paychecks. They couldn’t afford to get permits so they would sneak onto the subway and film for a few minutes here and there, hoping they wouldn’t get caught. Then Susan Berman fell during an action sequence and broke her leg, which meant they couldn’t film for the next four months. Not to be deterred, Seidelman used the time to raise more money. She recounted to an interviewer later that around that time, her grandma died and left her $50,000 that was supposed to pay for her wedding. Instead, Seidelman decided to use it for finishing her film. 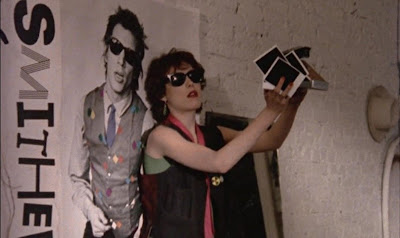 The DIYness of it all ends up giving the film an authenticity a studio picture would have a hard time capturing. Every scene feels electric, the music (supplied by The Feelies, at Jonathan Demme’s suggestion) pulses with a mix of anxiety and excitement. And don’t even get me started on the fashion! I want to steal every outfit Wren wears in this movie. I haven’t been this obsessed with copping a character’s look since I watched Run Lola Run! As it turns out, Seidelman originally wanted to be a fashion designer and she crafted some truly iconic looks in this movie. On the director’s commentary, she explains that she picked up some key pieces from a shop in the Village run by Patricia Field, who would go on to collaborate with Seidelman again on Sex and the City.

The first time I watched this film, when it was over I immediately went back to the beginning and watched it again with the commentary. Then I watched it again two nights later. Then I watched it again this week. And I have it on in the background right now. It makes me want to go to New York. It makes me want to be a punk rocker. And then it makes me glad that I can vicariously do those things without leaving the comfort of my living room. Joan Didion wrote about her first trip to New York in her book Slouching Towards Bethlehem, “I still believed in possibilities then, still had the sense, so peculiar to New York, that something extraordinary would happen any minute, any day, any month.”

Watch Smithereens on the Criterion Channel, rent it on Amazon Prime, or pick up the reissue on Criterion Blu-Ray -- and prepare for something extraordinary to happen.