Oliver Stone’s endless, fabrication-filled musical biopic The Doors has arrived on Blu-Ray 4K, which guarantees more vivid hallucinations and even more questionably metaphoric Native Americans along the roadside. In a bold and unprecedented marketing move, the disc producers have soaked the shrink-wrap, keep case, paper insert, and the disc itself in lysergic acid diethylamide, insuring that the dangerous, controversial drug seeps slowly into your blood stream as the movie unfolds.

While I am still thinking clearly, here’s the Plot in Brief: Jim Morrison is a little boy… No, wait… now he’s a teenager played by Val Kilmer, going to UCLA film school. No one likes his pretentious, arty student films, so he walks along the beach with Ray Manzarek (Kyle MacLachlan) and together they hatch a plan to get money from high school students for generations to come. They form a band called the Doors, which specializes in pretentious, arty student songs. Though in my deteriorating mental state, they may have doored a binge called the Floors. No, wait… this is The Doors in 4K.

Could this disc really be called The 4K Dorks? 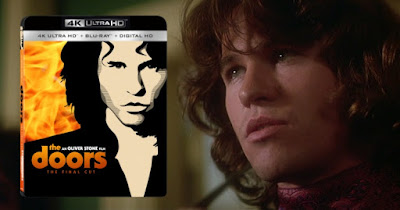 The band is an instant success but Morrison is a bad boy, a bad poet, and a bad drinker. He is late for rehearsals, late for recording sessions, and late for gigs, which I am assuming is why he eventually came to be known as the late Jim Morrison. The band breaks up, and Jim moves to France so he can be closer to his grave.

Somewhere in all of this hallucinogenic montage of hooey, Frank Whaley, Kathleen Quinlan, Meg Ryan, Michael Madsen, Billy Idol, Floyd “Red Crow” Westerman, Wes Studi, Crispin Glover, and Kevin Dillon wander around, playing the parts of people who may or may not have really existed. Years after the film was released, writer/director Oliver Stone admitted that it may have been a mistake to make Kathleen Quinlan’s character an amalgam of five or six other people, but still call her “Patricia Kennealy,” a real journalist who was really romantically linked with the real Jim Morrison. Kennealy is really in the film too… or maybe she’s not. By the time Kevin Dillon appeared on screen, I was tripping balls, and I became convinced that Dillon was playing Brian Flagg, the character he played in The Blob, and I kept waiting for Dillon to introduce the Blob to Jim Morrison so that they could record a duet single together called “Blub.” 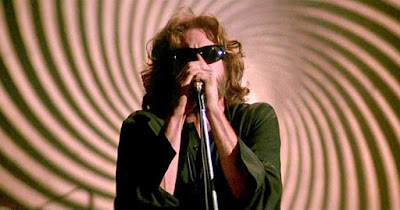 I honestly can’t see any “Oh, wow… the colors and the lights!” moments in this new 4K transfer. As I have said in the past, these new 4K discs tend to hit me as “hit or miss” affairs. The relatively recent 4K’s of 2001, Coco, Halloween, and The House With a Clock in its Walls all blew me away. Other recent 4K discs like The Big Lebowski, Die Hard, and Goodfellas did not look to me appreciably different than their regular Blu-ray counterparts. Maybe it’s my old, 2K eyeballs. Don’t get me wrong here; the film looks fine. I’m just not sure that my readers with 4K capabilities will think the upgrade would justify the expense. (Think about that phrase: “4K capability.” It sounds like code for someone who is really good at weird sex stuff.)

The Doors in Norway?

As many other critics have pointed out. The film seems like an exercise in dressing actors up in Salvation Army thrift store-style clothes, elaborate wigs, and beards. I still remember the marketing campaign for this movie seemed to focus on Val Kilmer’s performance/impersonation. The trailer can be neatly summed up with, “Jesus Christ, he really looks and sounds like Morrison!”

Like the more recent Bohemiam Rhapsody and Rocketman, this film works best as a sort of big budget PowerPoint presentation that gives you something to look at while you listen to music that you really like through the powerful sound system at the theater.

Through the patchouli-scented haze I am now looking at the movie through, I can still remember Tim Lucas’s original Video Watchdog review when The Doors was first released on VHS and laserdisc in 1992. Besides opining that the film might have done better if it was sold as a free wheeling fantasy version of the events of the sixties (as opposed to the based-on-facts biopic the studio and the filmmakers claimed). The thing I remember most about that review was Lucas ferreting out one of Oliver Stones’ more maddening/cooler than shit freshman film school tricks: the use of actor Richard Rutowski as a symbol of death. You might remember him as the naked, bald man who walks down the hall when Pamela discovers Jim’s dead body in Paris, but he is all over the film: Lucas notes over 15 other appearances, usually in the background of the shot, though he is right behind Val Kilmer in the “Break On Through” audience participation number. He’s a Native American in the film’s first scene, a homeless man a little later on, he’s there watching the Doors from the balcony of the Whiskey a Go Go, and he’s at the children’s birthday party at the end of the film. It’s creepy crap like this that reminds me of spinning the White Album backwards on my turntable with my best friend Tom when we were in junior high. We’d scare the shit out of each other with “Turn Me On, Dead Man,” and other frightening utterances we only thought we heard.

This could be the longest film ever made. The new “Final Cut” is a little over two hours long, but it feels like five. Scratch that… it feels like ten. No, listen… listen… what I am trying to say is that I’m still watching it right now. I have always watched this film, and I will always be watching it. 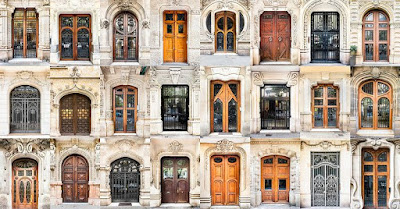