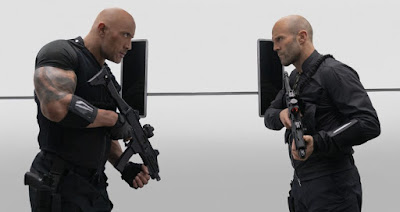 In which the Family takes its first step into a larger world. Well, sort of.

Learning to deal with loss is an important coping skill. Time is finite. Things end. They die. They fade away. On the other hand, maybe they evolve. They leave us behind because they’ve grown beyond us. That’s kind of beautiful, you know? Certainly better than dying. Either way, their absence leaves a gap, and how we fill that gap often comes to define us moving forward. What the hell does this existential postulation have to do with the Fast & Furious franchise? Well, we lost something, didn’t we? We lost Paul Walker, and — as 2017’s joyless The Fate of the Furious more or less proved — he took our beloved Fast & Furious franchise with him. It’ll go on, of course. Money is money. Vin Diesel is still out there trying to prove whatever it is he’s trying to prove. He’s the most bald? Who knows. The point is this: The Family is dead. Nothing is going to bring them back to their glory days. It’s best we all learn to fill the gap and move on. 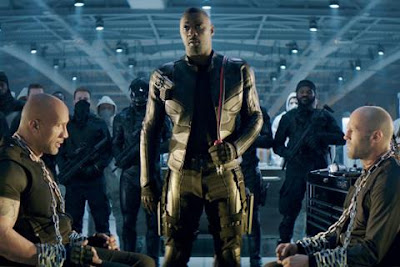 And so we have. We’ll never know who was the first to see the writing on the wall, but at some point, Universal Studios decided to spin off with some of the Family’s ancillary members. Cynical? Yes. Unoriginal? You could say that. Financially prudent? Definitely. This brings us to Fast & Furious Presents: Hobbs & Shaw. The film follows series antagonists Luke Hobbs (Dwayne Johnson) and Deckard Shaw (Jason Statham) as they battle a deadly super-human (Idris Elba as Brixton Lore) who serves a deadly super-conglomerate of mercenaries and media manipulators hoping to unleash a deadly super-virus on the world in order to save it from capitalism, disease, and intellectual decay. Where is the virus? Well, MI6 agent (and Deckard’s sister) Hattie Shaw (Vanessa Kirby) has injected herself with it in order to stop it from falling into the wrong hands. Hobbs and the elder Shaw are forced to team up, find Hattie, and stop Lore before he gets the virus.

Look, it honestly doesn’t matter. Johnson is Taller Action Man and Statham is Shorter Action Man. They fight Bad Action Man with the help of Action Woman. Don’t bother thinking about it. Don’t bother trying to make sense of it. Don’t bother catching up on the Fast & Furious franchise. There are no real character details to know, no real Fast Easter eggs (save for the end credits) to find, and no tangible connection to anything having to do with reality. Here’s the twist, though: That’s all in Hobbs & Shaw’s favor. Despite the film’s seemingly-cynical origins, series writer Chris Morgan (teaming with Iron Man 3 and Mission: Impossible - Rogue Nation writer Drew Pearce) feels loose and free for the first time in forever, making the most of an opportunity to get out from under the Family-centric lore he built way back in 2001. Ostentatiously directed by John Wick’s David Leitch, Hobbs & Shaw is unapologetically loud, swaggering, muscular, and goofy. It’s 135 minutes of dick-swinging and face-punching hysteria set against CGI nuclear reactors and Samoan thunderstorms. Again, these are all good things. 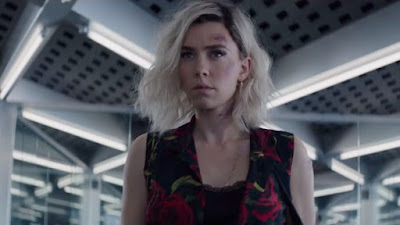 Because Hobbs & Shaw is a dumb movie made by smart people. It’s crisp and clean. It’s energetic and fun. It’s tightly-plotted with simple — but effective — themes that resonate exactly as far as they need to without becoming muddled or tedious. It rarely condescends to its audience or asks them to invest in an idea that it’s not interested in paying off. Don’t misunderstand: It’s profoundly stupid. It abandons the laws of physics in the first act and equips its heroes with the kind of plot armor rarely afforded to anyone who isn’t an Avenger. But at least it’s honest. It gives us four characters with well-defined goals and allows them to explore and amend those goals throughout the adventure of the film. It develops their relationships and gives us reason to believe they’ll be better off with each other than without. It presents a laughably simple solution to an insurmountable problem that ends up being one of the most profound statements about love, cooperation, and self-sacrifice in the entire series. 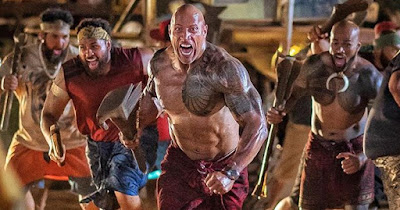 The Family is gone. We’re never going to get them back. But we could do a lot worse in substitute than Hobbs & Shaw. It’s not a game-changing action film like The Raid or John Wick. It’s not as snarky as Deadpool or as grand as Star Wars. You’re not going to remember much about it after you leave the theater. But rather than try to recreate some kind of insincere Family dynamic with a sprawling and scattershot group of people who barely seem to know each other (and, in fact, have every reason to hate each other), Hobbs & Shaw gives us an actual family learning to get along. You may not like the way Dwayne Johnson has hijacked the Fast & Furious franchise — if that’s the case, you really won’t like the third act of this film — but you might come to agree that he’s using this particular power for good. He’s allowing us to move on from the Toretto Saga with grace. He’s coping. Adapting. He’s filling in that gap with something worth watching. That’s enough for me. That ought to be enough for you.
Posted by Patrick Bromley at 12:00 PM