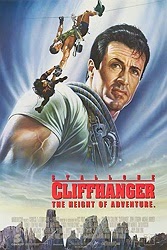 In 1993, Sylvester Stallone needed a comeback. Cliffhanger was that comeback.

1993 was a big, big year for action movies. After becoming the biggest movie star in the world with the success of T2, Arnold Schwarzenegger flew too close to the sun with Last Action Hero. Jean-Claude Van Damme released both the underrated Nowhere to Run and Hard Target (part of F This Movie Fest 4!), which is particularly notable for being the movie that brought legendary Hong Kong director John Woo to the United States. Bruce Willis was treading mediocre water in Striking Distance. Movies like In the Line of Fire and The Fugitive offered more "adult" alternatives to the traditional action film, while martial arts competitions were being represented all over the place thanks to movies like Only the Strong, Best of the Best 2 and Sidekicks. And prior to enhancing his calm as the star of the great Demolition Man (also part of F This Movie Fest 4!), Sylvester Stallone had his biggest hit in years with Cliffhanger. 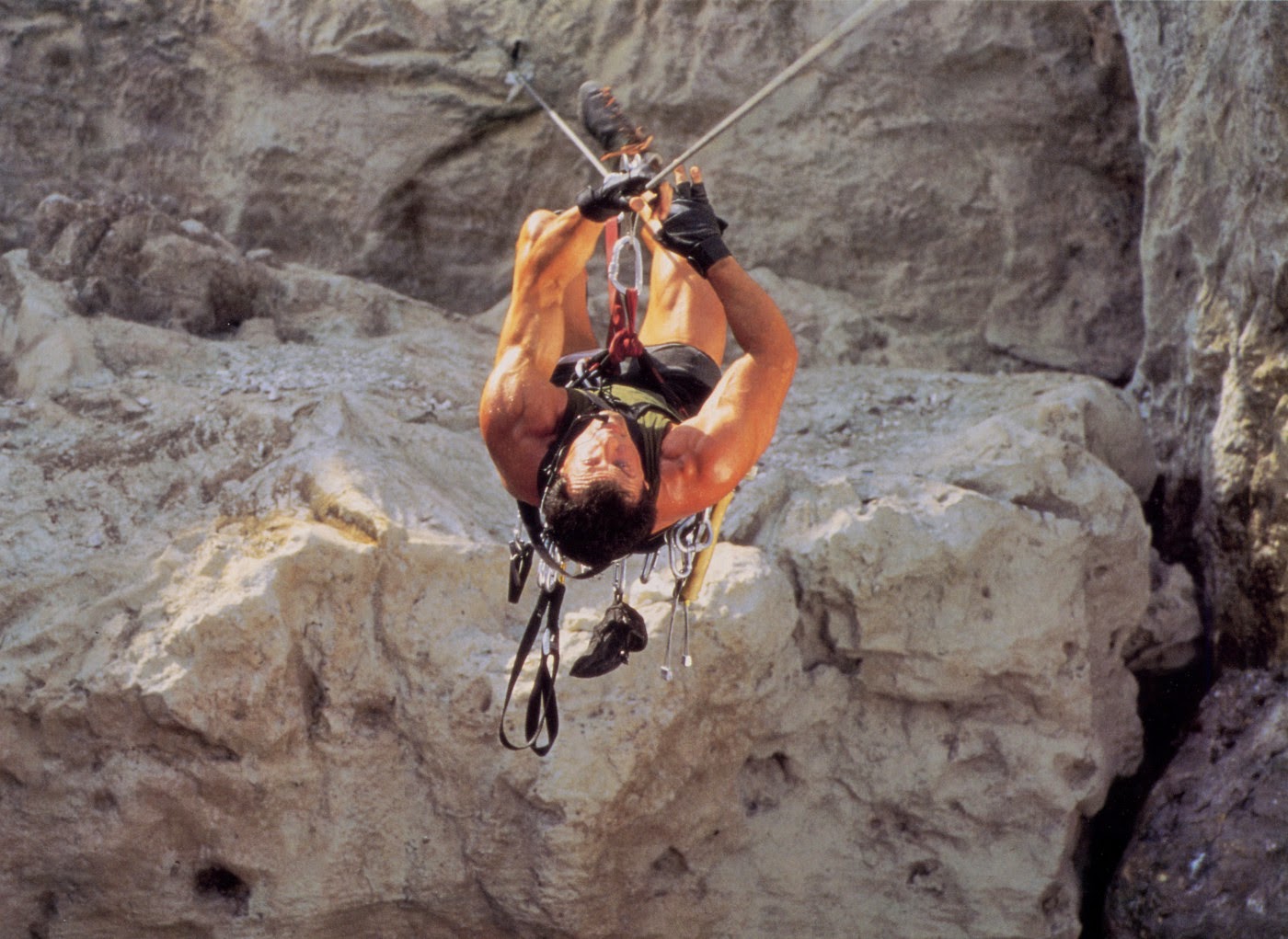 Essentially Die Hard on a mountaintop, Cliffhanger boasts gorgeous photography, a scenery-chewing villain turn by John Lithgow and big, confident direction by a still-hot Renny Harlin. At a time when a lot of action movies had settled into a very familiar formula, this one stood out not because it didn't follow the same formula (it's still one of MANY Die Hard rip-offs) but because it did so on such a big, beautiful scale. There are plenty of shots that are faked by shooting on a stage or via rear-projection, but so much of the movie was filmed in practical locations -- the Alps of Northern Italy, to be exact -- that it heightens the sense of danger and, if nothing else, allows us to admire the scenery, something very few action movies ever do. Despite hitting so many recognizable beats, it feels in many ways like its own thing.

Stallone plays Gabe Walker, rescue ranger and mountain climber extraordinaire who experiences tragedy in the movie's opening moments when an accident leads to the death best friend and fellow ranger Hal Tucker's (Michael Rooker) girlfriend. Months go by and the two do not speak; Gabe is no longer climbing and lives in what appears to be self-imposed isolation. One day, a group of terrorists led by Eric Qualen (John Lithgow) rob a U.S. Treasury plane in mid-air, but their money falls from the sky and crashes on the mountains below. They take Hal hostage and force Gabe out of retirement to help recover the suitcases full of cash. But because Gabe is played by Sylvester Stallone, he has other plans for the terrorists. His plans involve murder. He kills the shit out of all of them. 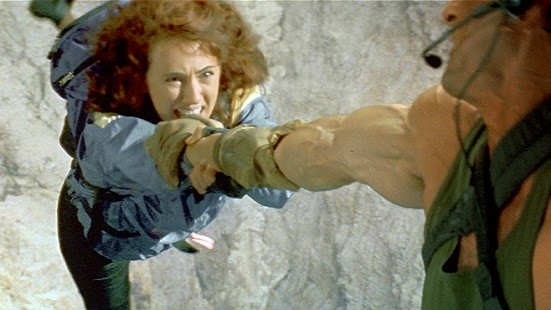 I'll say this for Cliffhanger: even if the movie didn't work (and as a #HeavyAction fan, I'd say it totally does), that opening sequence is really something. Despite knowing how it was going to play out, I still have memories of feeling unbearably tense upon seeing it for the first time in 1993, and though its impact has diminished over time -- it has been parodied into oblivion (most famously by the terrible Ace Ventura: When Nature Calls) and itself plays as self-parody, actually -- it remains a pretty incredible filmmaking set piece. The ariel stunt work is jaw-dropping, the momentum well developed. What really makes the scene work so well, though, is the performance of Michelle Joyner as doomed climber Sarah. Though she's in the movie for less than 10 minutes, Joyner does the best acting in the movie, really selling the terror and fear of knowing she's possibly (probably definitely) going to die. And because Renny Harlin is a sadist, he lingers on the moment until we're ready to completely break. After she falls, he makes an interesting choice -- he shows her falling (screaming, screaming, falling and screaming) in a separate shot so we experience the event from her perspective, not just from the perspective of everyone still standing on the mountain. I would love to give Renny Harlin credit for putting a human face on the tragedy and wanting us to bear witness to her final moments, but realistically I think he's just a mean spirited sonuvabitch.

Cliffhanger is the movie that taught me an important lesson: sometimes size matters. I know I've told this story on the podcast before, but when I saw the movie back in 1993 it was in 70mm on one of the largest screens in the Northwest suburbs of Chicago. The photography was stunning, the action breathless, the sound explosive. This experience, combined with the fact that I was starved for a good Stallone action movie after a few years of disappointment, convinced me that Cliffhanger REALLY WORKED. It was a fun, violent time at the movies. 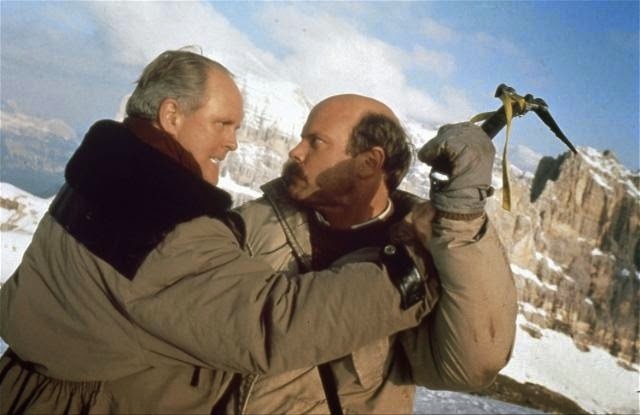 Cut to a few months later when I'm rewatching the movie for the first time on video -- and not even on my home television, either, but rather on a bus en route to Branson, Missouri, for a class trip. It's unfair to expect any movie to work under those circumstances (it's like asking a death row inmate if his last meal "tastes good"), but Cliffhanger suffered more than most. Gone was the scope and scale, the experiential immersiveness of that 70mm screening. All that was left was shit like dialogue and performance, and these are not areas in which Cliffhanger excels. Take, for example, lines like:

"You want to kill me, don't you Tucker? Well take a number and get in line."

"I wasn't born to die on a fucking mountain!"

"I wanted you to go to your grave knowing I'm going to treat the bitch right."

That last one is the wordiest bad guy send-off line in history. It does not work. Neither does Lithgow's turn as British baddie Eric Qualen. The choice to make him English was a terrible one, both because Lithgow's accent isn't great and because the Eurotrash villain was far too played out in post-Gruber action cinema. There's nothing threatening about him in practice; he's just an accent and a smug attitude and a bunch of garbage one-liners. So there were some years in the '90s when that shitty bus viewing left a bad taste and I dismissed Cliffhanger as being well-dressed junk. This is because I was an asshole for some years in the '90s. Nowadays I see so much junk that I must appreciate it when it is well-dressed. Besides, if there's anything that my writing at F This Movie! has demonstrated again and again, it is that I like junk. There is an art to making good junk, and Cliffhanger is good, artful junk. 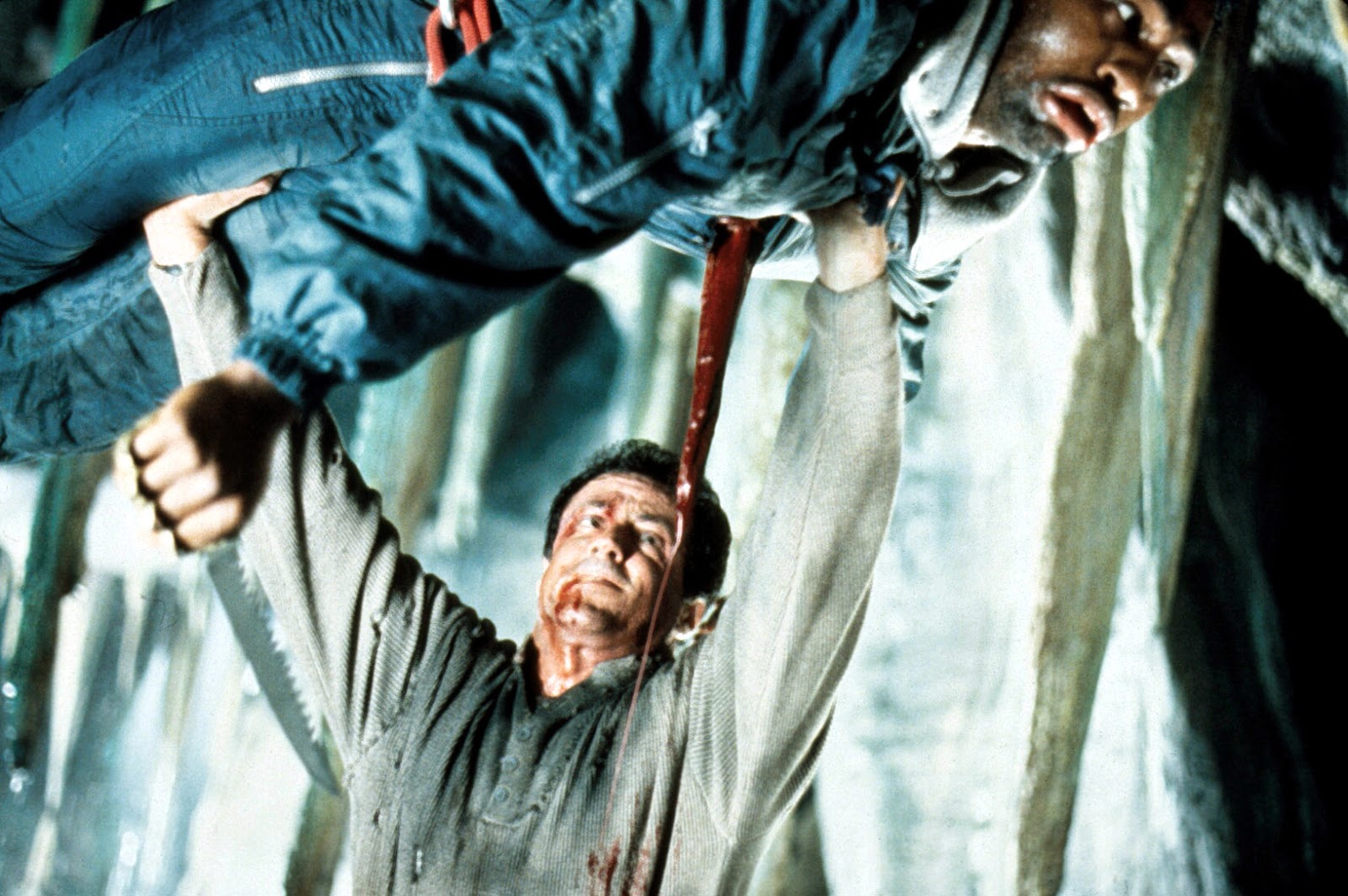 Because Cliffhanger comes from a time when R-rated action was still the norm and because Renny Harlin is incapable of doing anything halfway (even when he shits the bed with something like The Legend of Hercules, boy does he shit it COMPLETELY), the violence in Cliffhanger is really mean-spirited and bloody -- so bloody, in fact, that it had to make cuts to avoid its being branded with its original NC-17 rating. Characters don't just get shot; they explode into a hundred bursting squibs. One guy gets impaled on a stalactite (pictured). Many of these moments are shot in agonizing slow motion; Harlin, like John Woo, opts for an "operatic" style that comes off as completely overwrought, reveling in the constant nastiness of the violence.

Made for a hefty $65 million (which is slightly more than the reported budget for Jurassic Park released the same year, and that movie featured state-of-the-art special effects that brought DINOSAURS TO LIFE), Cliffhanger eventually grossed $255 million worldwide to become the seventh highest-grossing movie of 1993. It was a huge movie in every way. Unfortunately, Stallone was unable to capitalize on its success and went back to a series of disappointments that either incorrectly used his persona or else failed to recognize the seismic shift experienced by the action genre in the '90s. One man armies like Stallone were no longer in fashion. Guys like him and Schwarzenegger and Seagal were no longer the draws that they once were, and Stallone would spend much of the rest of the decade struggling to find his place in Hollywood. It wasn't until he began starring in a series of nostalgia-fueled throwback vehicles that either brought back his best-loved characters (Rambo, Rocky Balboa) or celebrated the greatst hits of '80s action (the Expendables franchise) that Stallone would find his footing again. In that regard, Cliffhanger represents the last best hour of Stallone 1.0. 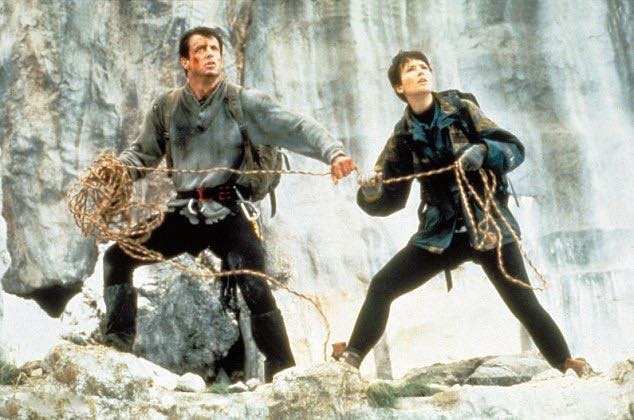 In one way, Cliffhanger can be read as an autobiographical statement on Stallone's career -- it's literally about him getting his mojo back and returning to action movie stardom (in the same way that Demolition Man, released later the same year, is about his irrelevance as an aging dinosaur of a bygone era [era]). When the movie opens, he's on top of the world -- the swinging dick coming off of being one of the biggest stars of the '80s. The tragic accident that opens the film? That's the hubris of movies like Lock Up and Oscar and even the critically lambasted Rocky V falling off the top of the mountain. That's Stallone's star plummeting to the ground.

That scene? That's Stop! Or My Mom Will Shoot.

The rest of the movie follows Stallone as he recovers from that tragedy. His confidence is shattered. He is vulnerable. Afraid. The real-life baggage that he brings into Cliffhanger makes for one of Stallone's more interesting performances, as he feels genuinely bruised and humbled and hungry for a hit. Gabe's broken faith, coupled with the film's Die Hard-inspired premise, make Stallone the underdog for the first time since the original Rocky. It's a persona that suits him better than, say, the cocksure preening of a Ray Tango. Gabe Walker has more in common with Stallone's best characters (early Rocky Balboa, the John Rambo of First Blood, Cop Land's Freddie Heflin), and his gradual reemergence as a kickass action hero is one of Cliffhanger's greatest pleasures.

When the action movie dust of the '90s finally settled, somehow Cliffhanger remained standing as one of the decade's most memorable efforts -- not best, necessarily, but most memorable. Renny Harlin directs the movie entirely with his dick, Alex Thomson's mountain photography is great, the practical stunt work is amazing, even Trevor Jones' syrupy theme makes me happy in the way that it's reminiscent of the "pretty" parts of James Horner's Commando score. But the best thing about it is the way that it mirrors Stallone's own journey in the early '90s. It brought him back, if only for a little while.