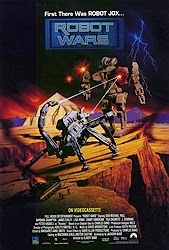 1993's Robot Wars is often recognized as the unofficial sequel to Stuart Gordon's Robot Jox. I have seen Robot Jox, and you, Robot Wars, are no Robot Jox.

Picking a Full Moon movie to celebrate 1993 week was a bit of a challenge. The company released six films that year (more if you include titles from their offshoot labels like the kid-friendly Moonbeam and the boob-friendly Torchlight Entertainment). Two of those films, Bloodstone: Subspecies II and Arcade, I have already written about. Two others, Puppet Master 4 and Dollman vs. Demonic Toys, are sequels to films I have not yet covered and my crippling OCD will not allow me to go out of order. That leaves just Mandroid and Robot Wars. Six in one, half dozen in the other.

So while Mandroid certainly sounds promising -- and I'm sure I'll get to it eventually in a Full Moon Fever column -- I went with Robot Wars. Though marketed as a spiritual sequel to Robot Jox and in some cases literally called Robot Jox 2, I knew that Wars had nothing to do with Jox other than that Charles Band went on a giant robot tear in the early '90s (in addition to these two titles, there was also Crash and Burn). Maybe it was his way of offsetting his obsession with tiny puppets. Still, the movie is directed by Albert Band (father of Full Moon head honcho Charles Band) and stars Barbara Crampton, so that was enough to sway me.

It's 2041 America, and most of the country has been wiped out by a toxic gas crisis 50 years earlier. The country is largely desert, the world's people broken up into factions including the rebel "Centros." While taking a tourist group on the world's only remaining MRAS-2 -- giant robots shaped like scorpions -- pilot Drake (Don Michael Paul) and his co-pilot Stumpy (James Staley) come under attack by Centros. Though they escape mostly unscathed, one passenger aboard the robot -- a scientist named Leda (Barbara Crampton) -- suspects there's more to the story than just the "training exercise" the skirmish is explained away as being. She meets up with her friend, journalist Annie (Lisa Rinna with a very different face), and the two scheme to investigate Crystal Vista, one of the only remaining 20th century towns that is supposedly just as it was before the toxic gas scare. Oh, and while all this is going on, Drake is getting in trouble with his superiors and a visiting Eastern Alliance diplomat (Danny Kamekona) observes the MRAS-2 with plans of building his own...but turns out to be a terrorist who steals the robot and goes on the attack to start a war between the Alliance and the U.S. Oh, and a perfectly preserved second robot lies dormant underground in Crystal Vista, which makes a giant robot showdown very convenient.

At just 72 minutes long, there is an insane amount of plot in Robot Wars. Very little of it is of the compelling pulp variety, either, but rather the kind of pseudo-futuristic political nonsense that torpedoed The Phantom Menace. One would hope that a movie called Robot Wars would deliver on the promise of its title -- not that it would feature a ton of wars being fought by robots (Full Moon never had the budget for that kind of thing even during the halcyon days of the Paramount deal), but that it would be a movie with the energy and spirit to warrant the name. While it's not uncommon for a low-budget genre movie to spin its wheels with dialogue and exposition for most of its running time only to save the good stuff for the end, it would be nice if Robot Wars spun its wheels in a way that was less dry and confusing. 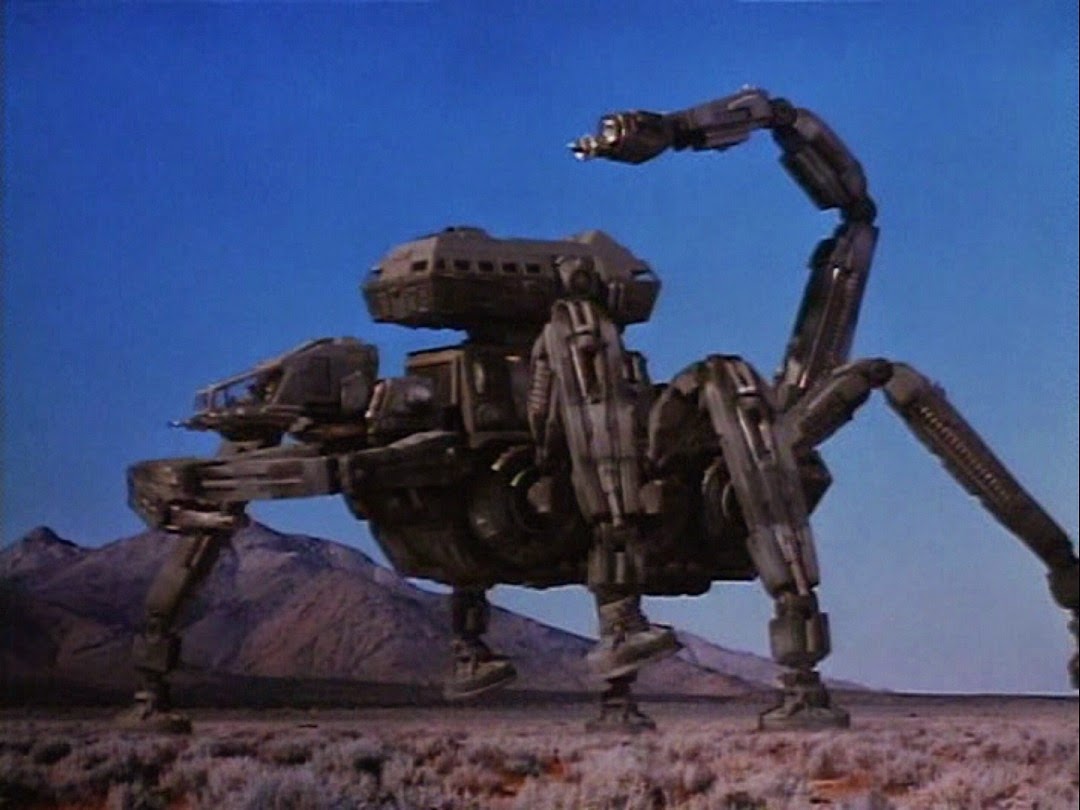 Despite the babble that passes for dialogue in Jackson Barr's screenplay, the actors sell the hell out of the craziness. Don Michael Paul attacks every line like it's the last thing he's ever going to say; his performance is never quite "good," but always entertaining in its endless series of weird choices. James Staley performs with the affable redneck charm of a guy who doesn't know that cameras are rolling. Lisa Rinna does little to suggest that she would go on to be a bigger star, but it's fun to see her in a movie like this before she would find success as a cast member of Melrose Place (and, more importantly, co-starring opposite David Hasselhoff in the made-for-TV movie Nick Fury: Agent of S.H.I.E.L.D.) The one holding the entire movie together is Barbara Crampton, who manages to always look beautiful despite being saddled with ill-fitting "future" clothes and being photographed against flat, cheap sets. She's smart and spunky, and when she hauls off and punches Drake on their first encounter, she really seems to mean it (and, in her defense, he seems to be aiming for "roguish" but comes off as wicked sleazy). By the end, the pair manage to generate some actual chemistry together, and as fascinated as I am by Paul's performance I attribute that entirely to Crampton. She's always the best. 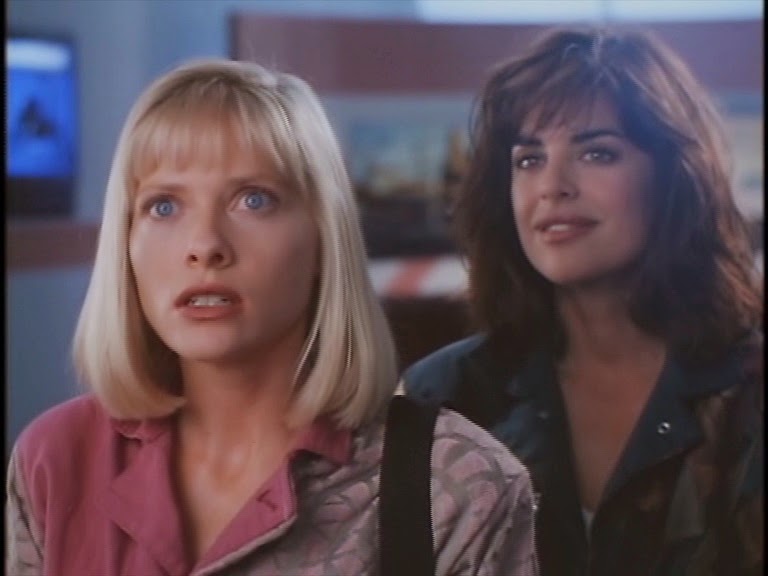 For its first hour, we don't see much of the robot in action -- just some stop motion shots of it walking through the desert (realized via David Allen Productions) which are repeated again and again -- so when we finally get to the robot-on-robot action in the last 10 minutes, we are more than primed for some rock'em sock'em shit. There are some viewers who will feel let down by the final fight or complain about the stop motion and obvious miniature model work, but as I've said before those are people who don't know how to watch movies like this. Seeing the seams is a given; I'd argue it's part of the charm. The effects, while cheaper looking (probably because they are, in fact, cheaper) and not as well disguised as those in Robot Jox, make the finale enjoyable -- it's when Robot Wars finally cuts loose, has some fun and becomes the movie we've been waiting for it to become. The last shot in the movie of a giant robot standing in the desert against a gorgeous setting sun (as its two occupants share their first kiss inside) embraces the romance of old Saturday afternoon adventure movies in every way. It convinced me that Robot Wars works, and in that moment I was ready for a sequel. 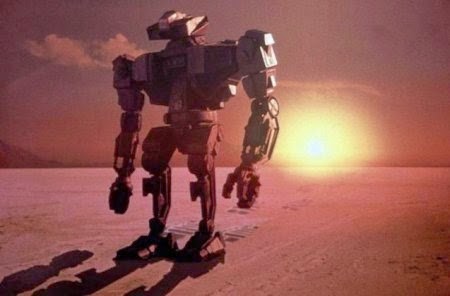 It might be unfair to compare Robot Jox to Robot Wars, as the former film is directed by the great Stuart Gordon and the latter is directed by Albert Band. He's a guy who knows how to direct a B movie, but unlike Gordon never quite elevates it either. His best film, 1958's I Bury the Living (I might call Doctor Mordrid his best, but he was a co-director on that), is pure exploitation on the cheap -- a movie that unapologetically embraces being pulp. He's never able to do that with Robot Wars because the screenplay won't let him. It's too busy focusing on the wrong things like political machinations or trying to accomplish world building through clunky expository dialogue. Robot Wars falls into the trap of a lot of low-budget genre movies: it's too much tell and not enough show. Like a lot of Charles Band productions (particularly during the Empire days), the poster for Robot Wars sells a more exciting film than is actually delivered.

1993 was still very much part of the Golden Age for Full Moon Features (then called Full Moon Pictures), but a title like Robot Wars is evidence of both the company's blessing and its curse: they made too many movies for all of them to work. They were often stretched too thin; they were rushed and under-funded. It speaks to the studio's ambition and creativity, but it's also the thing that hobbled them at times. The upside is that they were cranking out movies at such a ridiculous pace that there exists now an enormous back catalogue to work through, most of which have already been made available on Full Moon Streaming. I like that there was room for different kinds of movies on their slate in '93: there were the sequels to keep fans happy and make the big money (though Subspecies II isn't just a cash grab but actually a superior film), but there were other weird and more experimental movies like Arcade and Robot Wars. It's never going to be one of my favorites, but it doesn't have to be. I'll leave that responsibility to Robot Jox.

Buy Robot Wars on DVD through the link below and support F This Movie!