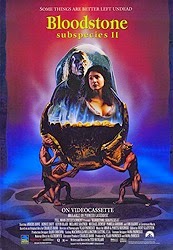 Writer/director Ted Nicolau's Subspecies franchise is one of the flagships of Full Moon Features. With four films and a spin-off (The Vampire Journals, currently being prepped for a Blu-ray release!) plus one of Full Moon's most recognizable characters in Radu the vampire, it's a series that has carved out an identity for itself outside of the company -- there are a lot of horror fans who love the movies but don't know otherwise know Full Moon or aren't aware who Charles Band is. The series is characterized by an authentic sense of place (they're shot on location in Romania), a gothic seriousness that's atypical of Full Moon Features and, of course, Anders Hove's performance as Radu the vampire. There's a lot to like in all the films in the series, but none more so than in the first sequel.

Picking up directly after the events of Subspecies, 1993's Bloodstone immediately brings the decapitated Radu back to life in the film's opening minutes (via some cool visual effects and movie's only appearance of the tiny little Subspecies creatures). He murders the sleeping the Stefan and moves on to Michelle (Denice Duff) who wakes and escapes with the Bloodstone. She skips town to Bucharest to get in touch with her sister, all the while slowly transforming into a vampire and both hating and fearing what's happening to her. While Michelle's sister and the local police try to locate her, Radu continues to give chase, hunting down his precious and powerful Bloodstone...and perhaps his latest progeny.

Everything about Subspecies II is superior to the first film. The effects are better, the direction far more stylish and confident. Cool new characters are introduced, like Radu's decomposed mother (credited only as "Mummy" and played by Pamela Gordon) and Michelle's sister Becky (Melanie Shatner, daughter of James T. Motherfucking Kirk). More importantly, the main character Michelle is now played by a new actress: Laura Tate, who failed to make any kind of impression in the original film, has been replaced by Denice Duff, who will inhabit the role over the next three movies and transforms Michelle from a placeholder to an actual character. No offense to Tate, but Duff is a better, more dynamic actress. It helps that she has more of a part to play; whereas the Michelle of the first film was mostly trapped acting out a dull and lifeless (no pun intended) romance, this Michelle has a more dynamic arc as she unwillingly changes into a vampire through the course of the film.

Writer/director Nicolau tells us right up front that this is going to be a very different movie from the first one. The first things we see in the movie are a) Radu's decapitated head, which is gorier and more impressive an effect than almost anything we saw in the original film (the best that one could do was cut off a couple of fingertips) and b) Stefan murdered. Not just murdered, either. It is goopy and messy and violent. Stefan doesn't just die -- he is obliterated, and the exaggeration of his demise is not an accident. Nicolau really wants to wash his hands of the romantic original (either that or he was sticking it to an actor who refused to return, but that's me speculating as I have no knowledge of that being even remotely true) and tell us that this isn't going to be the movie about the brooding, dreamy vampire. Radu is his fucking hero. That Nicolau was making this kind of mission statement 15 years before it came fashionable to shit on Twilight is all the more impressive. 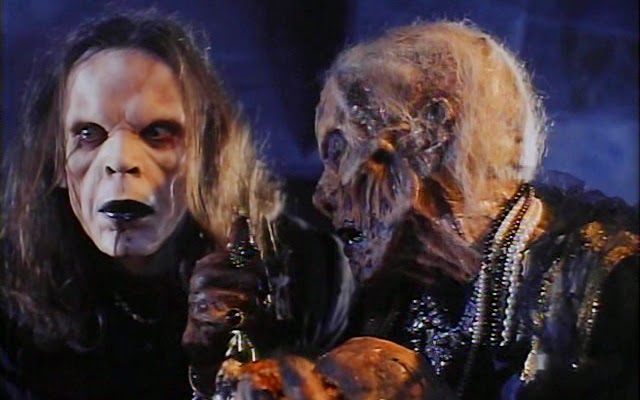 About Radu. He was my favorite thing about the first Subspecies, and I love the way Anders Hove played the vampire not as seductive or romantic but like some sort of hissing insect. Somehow Bloodstone manages to make Radu an even better character by making him feel more threatening (less through action than through form; more on that in a second) while giving him more dimension. Though not expressly played for laughs, the dynamic between Radu and his Mummy is hilarious. Once established as a kind of purely evil character is revealed to answer to someone, and the way Hove gives Mummy nervous sideways looks when she's talking shit to him. It tells us more about Radu, giving him backstory and vulnerability (even this monster is afraid of a bigger monster) and adds some levity to a series that's low on levity (another great running and darkly comic joke in the film is how people keep finding Michelle's "dead" body only to discover she's not really dead).  Supposedly Anders Hove was drinking much less on set during production of Bloodstone and it gives his performance a different kind of sharpness this time around.

But the real star of Subspecies II is Nicolau. Though he was shooting Subspecies II and III simultaneously, he does his best work in Bloodstone. It is a gorgeously photographed movie, filled with highly stylized shots that use light and shadow to create atmosphere beyond what is already built in to shooting on location in Romania. For the first half hour of the movie (when Radu is really chasing Michelle), there's hardly a shot in which his massive shadow doesn't enter a scene before he does. It's not only beautifully done, but effective, too -- it makes Radu something much larger and more ominous than just his physical form will allow. Bloodstone is one of the most artistically made of all the Full Moon films; it's certainly the one (only?) most influenced by German expressionism.

The score, by Richard Kosinski and Michael Portis (and the Aman Folk Orchestra), is also wonderful and gives the movie an energy that feels different from the majority of Richard Band-scored Full Moon movies (I say as a big fan of Richard Band scores). I've actually been driving around for weeks listening to the main Subspecies theme in my car. I recommend doing the same. It's Full Moon time all the time. 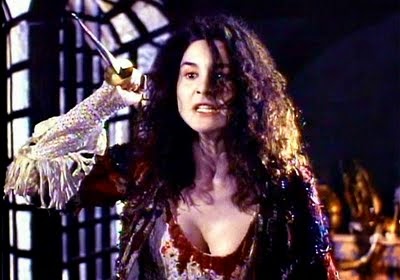 The Subspecies series is one that's fairly new to me; I only finally saw all the films after subscribing to Full Moon Streaming at the start of this year and writing this Full Moon Fever column. It's not one that I watched during my days as a video store kid in the '90s, when the Full Moon catalogue was at its best and speaking directly to my sensibilities. So maybe I find myself revisiting them again and again because they're new to me, or maybe it's because the movies really are evocative and hypnotic in a way that defies narrative momentum. The storytelling in the series is not its strongest point; in fact, there are long stretches of Subspecies II that would be improved by turning the sound down and letting the images speak for themselves (though that would remove the score, which would hurt the film). Yet I find myself repeatedly drawn to them -- the first two, anyway -- for reasons I can't fully understand or explain. Such is the power of Radu.

I wouldn't recommend seeing Subspecies II without first seeing Subspecies for a couple of reasons. The first and most obvious is because it's a direct continuation of the narrative, and while there's no way you would be lost in the narrative (since the threads of the original are all but cleaned up in the opening scene), the series works better as one long story being told. The real reason, though, is that Bloodstone is best appreciated as a huge artistic leap forward over the first Subspecies -- to really appreciate how good it is, you need to know where it started. That's not to say that the original movie is bad. I like it quite a bit. But Bloodstone is the Spider-Man 2 of the series: the (somewhat messy) groundwork has been laid and now the sequel can be both more ambitious and more accomplished.

I've only seen Bloodlust, the third film in the series, one time, but I remember not liking it nearly as much as Bloodstone despite the fact that they were shot simultaneously. Why that is I cannot say...but that's a story to be explored in another column.

Buy Bloodstone: Subspecies II on Blu-ray or DVD through the links below and support F This Movie!