Reviews: THE ELECTRICAL LIFE OF LOUIS WAIN and SPIRITWALKER 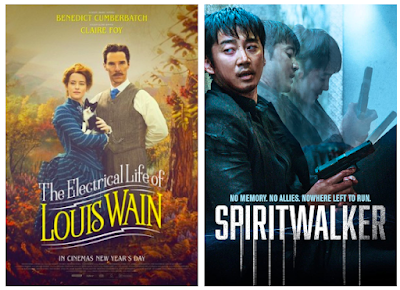 A pair of movies for your eyeholes.

The Electrical Life of Louis Wain (Dir. Will Sharpe)

When an idle scroll through Amazon Prime Video led me to The Electrical Life of Louis Wain, I thought that it was a parody. I thought the servers had buckled under the weight of “Benedict Cumberbatch Plays A Historical British Man” films, prompting the befuddled algorithm to kick out an image of the actor sporting a pointed, Victorian-era (era) mustache and posing resolutely alongside an age-appropriate actress of equal critical esteem (in this case, Claire Foy). Further inspection proved, however, that this was no glitch in the system. 2021 did see the release of Will Sharpe’s biopic about the eccentric British nobleman whose — and I’m quoting — “playful, psychedelic pictures transformed the public’s perception of cats forever.” Knowing full well that no one in their right mind would ever watch this film, the responsibility to do so fell to me. After all, when one man, for whatever reason, has the opportunity to discover how another man’s playful, psychedelic pictures transformed the public’s perception of cats forever, he has no right to keep it to himself. 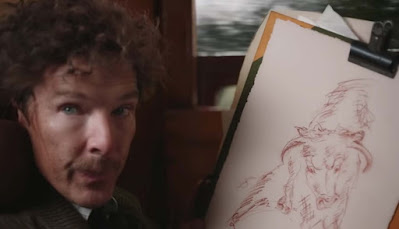 After the untimely death of his father, Louis Wain (Cumberbatch) is charged with the care of his mother and five fussy, precocious sisters. Though his artistic talent prompts Sir William Ingram (Toby Jones) to offer Wain a permanent post at his Illustrated London News, he finds himself unable to settle his wild imagination into any kind of domestic routine. Things change, however, when Wain falls in love with the adorkable governess (Foy as Emily) hired to care for the younger girls. In a move that shakes the British aristocracy to its very core, the unevenly-stationed pair marry and move to a country cottage. They live in peace there for some time — taking in a kitten they call Peter, who serves as muse for Wain’s paintings — until Emily succumbs to breast cancer. Inconsolable with grief, Wain throws himself into his cat paintings, through which he begins to experience visions of time and space overlapping through the electrical power of his feline subjects. Spinning further into what others see as madness, Wain reaches through the past and future to see his Emily again.

The Electric Life of Louis Wain is a film as strange as its subject, fluttering haphazardly between heavy period drama and Roald Dahl-esque whimsical fantasy without ever committing entirely to either. Cumberbatch can play the spectrumy Louis Wain in his sleep — set him to Sherlock mode and crank the “twitchy” knob a bit — but the film’s choppy tonal seas never allow him to find a rhythm, and Sharpe’s lack of a coherent directorial style keeps us at such a remove from Wain that the film feels more like something awkwardly foisted upon him than a journey he’s leading us through. Same goes for the central narrative conceit: We don’t discover that cat ownership was uncommon for the period until roughly an hour into the film, which makes it a lot harder to appreciate how Wain’s playful, psychedelic pictures transformed the public’s perception of them forever. And I really wanted to, folks. I really wanted to appreciate how his playful, psychedelic pictures transformed the public’s perception of cats forever. Maybe next time.

The Electrical Life of Louis Wain is available on Amazon Prime Video. 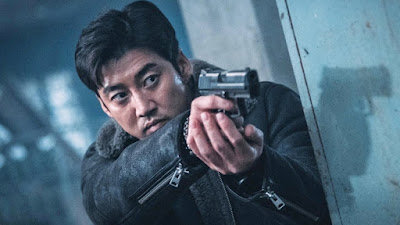 High-concept mashup movies are always a lot of fun to describe: Imagine This meets That. What if This was directed by That Person? What if This but set in That Universe and starring the cast of The Other Thing? South Korean director Yoon Jae-geun’s sophomore action feature asks, “What if Quantum Leap woke up in the middle of a Bourne Identity sequel and decided to fight its way out John Wick-style in a movie directed by the Crank guys?” That’s Spiritwalker, which begins when a man (Yoon Kye-sang) wakes up after a car accident and realizes he has no idea who he is. Pouring over ID cards and Polaroids for clues, he suddenly shifts again, waking up in the body of another man (Park Yong-woo), who seems to have some connection to organized crime. He then runs into Jin (Lim Ji-yeon), a beautiful femme fatale who seems to know more about the situation than she’s letting on. Shifting bodies every twelve hours, Ian (as we eventually come to know him) must unravel the truth of his identity and uncover a massive criminal conspiracy before it’s too late.

Don’t think too hard about the “how” or the “why” of Spiritwalker’s body-hopping psycho-temporal mechanics (the MST3K Rule is in full effect here), as none of the various explanations will hold up to intense scrutiny. We’re in Memento territory, where we forgive our protagonist’s short-term memory loss for being only as short-term as the plot requires to function properly. What matters is that Spiritwalker approaches the action/crime thriller from a fresh angle, one in which our protagonist has no idea whether he’s the hero or the villain or for how long any one of those things will be true. This is especially fun given the genre’s predilection toward questions of identity and allegiance (Imagine The Departed if DiCaprio, Nicholson, and Damon were actually just one guy switching back and forth between bodies), and its tendency to make grand revelations in the final act. It all sounds more than a bit overwhelming, but Yoon keeps a steady hand on the narrative wheel, ensuring that neither the plot nor the audience get too lost in the weeds.

Aside from the body-switching drama, car-chase set pieces, and Wick-style gun-fu, Spiritwalker’s other major draw may be Park Ji-hwan as Haengryeo, a homeless man who helps Ian get (re)acquainted with the Korean underworld. Haengryeo is a steadying force in all the chaos and the source of most of the film’s humor and pathos (In one great bit, Ian peels off a bill from his wallet in exchange for information, prompting Haengryeo to reach for the wallet itself), which comes in handy when our narrative is so principally focused on the absence of identity. Ian’s story — and especially his romance with Jin — will never quite hang together in a satisfying way, but Haengryeo scatters enough humanity throughout his own story that we don’t feel cheated out of characterization. Other than that, Spiritwalker is best appreciated for its wit, imagination, and genre savvy. It’s not as developed as the Loopers and Inceptions of the world, but it sits comfortably on the shelf with other high-concept sci-fi entries, ready to be mashed-up and remixed as future filmmakers see fit.

Spiritwalker is available for digital rental now.
Posted by Patrick Bromley at 12:00 PM