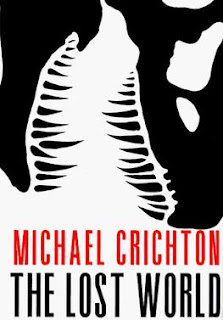 It makes very little sense to sequelize 1989’s Jurassic Park, a novel in which nearly every major character is killed, the island setting is firebombed into oblivion, and the guiding thesis — that control over nature is essentially impossible — has been resolved. In a career spanning nearly forty years, author Michael Crichton churned out roughly thirty airport techno-thrillers, never seeming to lack for a new angle or fresh concept. John Hammond’s dinosaurs were just one of a thousand catalysts for his unique brand of pop-science yarn, so why repeat himself? Then again, Crichton had never seen success like Steven Spielberg’s film adaptation, which would pull in a cool billion dollars in box office receipts and become one of the most culturally ubiquitous properties of the 1990s. With that, the same logic that made 1995’s The Lost World unnecessary suddenly made it inevitable. Unlike its predecessor, however, Spielberg’s film would take significant liberties with the source material, trading its calculated, almost funereal storyline for a vain attempt at another blockbusting cinematic adventure.

Crichton’s novel begins six years after the destruction of Jurassic Park, which — in a shameless bit of ret-conning — Dr. Ian Malcolm has miraculously survived (“It turns out I was only slightly dead,” he tells colleagues). Bound from reporting on his misadventures by a strict NDA, Malcolm has turned his attention to “complexity theory,” an evolution of chaos theory that examines the role of adaptation in multi-faceted ecosystems. Why do some species evolve, but not others? Was the dinosaurs’ extinction a result of catastrophe or their own behaviors? It’s during one of these lectures that Malcolm is confronted by Dr. Richard Levine, a cocky paleontologist who’s heard rumors of living dinosaurs and wants Malcolm’s help proving that extinction may have been survivable, that these prehistoric animals may still live harmoniously in the same kind of lost world to which Malcolm, himself, had alluded. Neither Malcolm nor Dr. Sarah Harding, former flames turned close friends, are convinced, however, prompting a frustrated Levine to set off for Costa Rica alone. 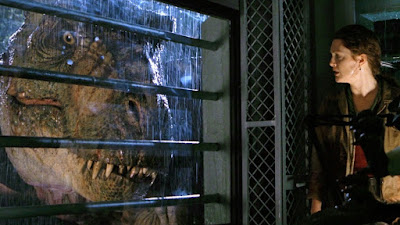 When Levine uncovers evidence of an InGen project known as “Site B,” Malcolm and field equipment engineers Doc Thorne and Eddie Carr rush to catch up. Stowing aboard Thorne’s specially-designed laboratory trailer are middle schoolers Arby Benton and Kelly Curtis, students of Levine’s eager to share in his discoveries. Sarah Harding soon joins them from Africa, and the team begins unraveling the mystery behind this long-abandoned factory floor from which Jurassic Park’s dinosaurs were mass produced. Though Levine is thrilled to see evidence of this evolutionary miracle, Malcolm knows that this is just more of Hammond’s manipulation. Within a day, another team arrives on Isla Sorna: Lewis Dodgson, still smarting from his failure to steal DNA samples from Jurassic Park, has been given one last chance by his BioSyn bosses. He and teammates George Baselton and Howard King scheme to bring viable eggs back from Site B with no regard for how it will disrupt the fragile ecosystem. As usual, chaos erupts, leaving both teams scrambling for survival.

As with its predecessor, The Lost World is less big-budget action spectacle than it is prosaic scientific debate. It’s more than a hundred pages before the team steps foot on Isla Sorna, with much of the early novel being devoted to chasing Levine’s breadcrumbs. Once they catch up with him, the arrogant bastard spends hours observing dinosaur behavior from a tree stand while Malcolm and the rest try to understand why their ecology is so lopsided and abnormal: There’s a disproportionate number of predators for such a small island, and none of the animals seem to be aging to maturity. Exploring a sprawling research complex, Malcolm and Harding eventually realize that a strain of misshapen prions have infected the population (think mad cow disease) and will soon wipe them out. They’re hunted by T. Rexes, Velociraptors, and other familiar carnivores during their stay on the island, including a Carnotaurus that can camouflage itself in the darkness. Dinos gradually pick off Dodgson and the bad guys, with our heroes escaping on a boat with minimal casualties. 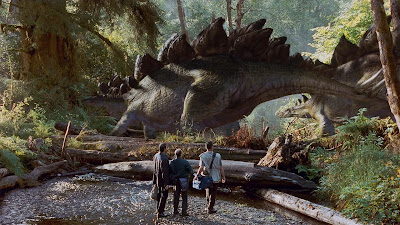 Perhaps the most remarkable thing about The Lost World is that it is very much a sequel to Crichton’s Jurassic Park rather than Spielberg’s. After the latter’s massive success, it’s easy to imagine Crichton writing with the screen in mind. He largely shirks that — invisible dinosaurs aside — in exchange for one of his usual dialogue-heavy plots that serves mostly as an excuse for the author to grind his ax against the invasive violence of scientific discovery. There’s action, of course, most notably a pair of T. Rexes attacking the research trailer and a motorcycle chase down a game trail that finds Kelly firing a machine gun at pursuant raptors from the passenger seat, but Crichton either doesn’t know or doesn’t care enough about tension, scale, or drama for these set pieces to feel like anything more than interludes between screeds about genetics. In their adaptation, Spielberg and screenwriter David Koepp (credited solo here after co-writing Jurassic with Crichton) predictably ignore nearly all of this in favor of a “more, bigger, better” version of their 1993 blockbuster original.

The results were most certainly mixed. Only a few years removed from their landmark achievement, Spielberg and Koepp do everything possible to capitalize on Jurassic Park’s four-quadrant success (Koepp even incorporated fan suggestions into the script, an obvious hallmark of quality narratives). The two Jurassic worlds are haphazardly merged into one, with a repentant Hammond (Richard Attenborough) sending a team of researchers headed by Harding (Julianne Moore) to document the Site B dinosaurs and sway public opinion in his favor so that he can wrest control of InGen away from his nephew, Peter Ludlow (Arliss Howard). Malcolm (Jeff Goldblum) — whose career was destroyed after he broke his InGen NDA — sets out to rescue girlfriend Harding with Carr (Richard Schiff), photographer Nick Van Owen (Vince Vaughn), and stowaway daughter Kelly (Vanessa Lee Chester) in tow. The “gatherer” group is soon met by Ludlow’s team of “hunters” led by Roland Tembo (Pete Postlewaite), who plan to move the dinosaurs to a new park in San Diego. Disaster strikes, the teams merge, and a T. Rex eventually wreaks havoc on a major American city. 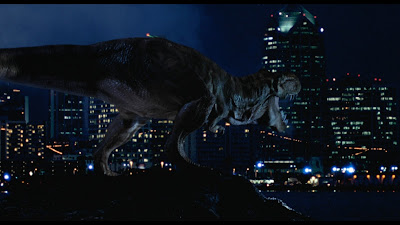 The Lost World: Jurassic Park remains a flawed but fascinating movie, one of the rare times in which Spielberg was felled by his instincts as a showman. While the first hour largely holds together — and ILM flexes significant dinosaur special effects muscle, especially during the early “round-up” scene and the trailer attack sequence — there’s a pervasive unpleasantness to the more acerbic characters and Janusz Kaminski’s (replacing Dean Cundey) darker cinematography. Malcolm is a fine protagonist for a more world-weary film — audiences decrying a missing sense of “wonder” are forgetting the entire point of the original story — but Spielberg quickly abandons his already watered-down thematics in favor of sprawling, gaudy dinosaur action. It’s as if the director felt hamstrung by plot concerns in the first Jurassic and, a sequel’s success all but guaranteed, deferred to the action figure-loving boy inside of him. There’s an argument to be made that this is what audiences want, of course, but “more, bigger, better” gets exhausting after too long.

And then there’s the back third of the film, the attack on San Diego that Spielberg claims was inspired by the 1925 film version of The Lost World, in which a Brontosaurus attacks London. Spielberg initially planned to include this sequence in a third Jurassic Park entry, but, “when [he] realized [he] would probably leave the directing job to someone else, [he] selfishly wanted to see the action of a T. Rex stomping down a suburban street chomping homeowners.” Coming off the one-two punch of Jurassic Park and Schindler’s List, it’s clear that Spielberg was feeling invincible and that no producer in their right mind would challenge a filmmaker advocating for spectacle over, well, unnecessary narrative logic. Though The Lost World remains the best of the Jurassic sequels, this mindless self-indulgence makes its last act almost interminably stupid and, when combined with Crichton’s lackluster source material, provides early (and eventually conclusive) proof that maybe — just maybe — Jurassic Park should never have become a franchise in the first place.
Posted by Patrick Bromley at 5:00 AM