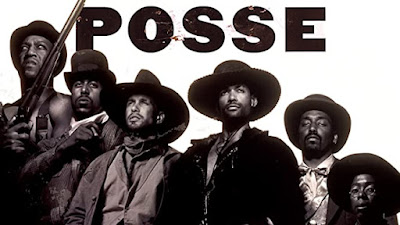 I finally watched a certain Western that I wish I liked better.

Posse is a movie I’ve almost watched dozens of times for nearly 30 years. At the time of its release, I was preoccupied by other movies in theaters like Dragon: The Bruce Lee Story and Cliffhanger, but I always thought Posse looked good based on the poster and advertising. I was drawn to it in a similar way I was with the Young Guns films. It felt like a Western that was hip and for my generation. For some reason, I never pressed play on my DVR recordings off MGM HD and made the effort to watch Posse. It was most likely because I never heard anyone be enthusiastic about it. I never heard of anyone be negative about it, either. It was a movie that existed as a poster and remembered for its deep cast. Just recently, I’ve had Posse’s star and director, Mario Van Peebles, on the brain because Patrick and I did a podcast on M.V.P.’s directorial debut, the incredibly entertaining and stylish New Jack City. Posse was his follow-up and the phrase “sophomore slump” could certainly apply. 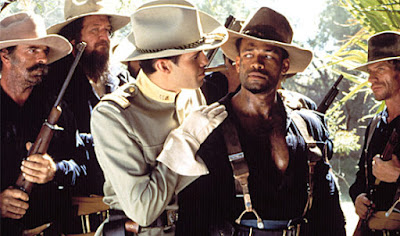 The style (which was such as asset in New Jack City) is a detriment to Posse. The film is visually busy in a way that’s distracting, with lots of Dutch angles and moving cameras within the frame. The visual gymnastics on top of the choppy storytelling make Posse a frustrating watch for the first half of the movie. Once the pieces start to come together in the second half (and the story and character relationships reveal themselves), the movie improves but not enough. Van Peebles is someone I admire more as a filmmaker than as a lead. In a movie like Solo or Posse, where he’s supposed to be an alpha male type, I feel underwhelmed. His charisma is too laid back. The supporting cast of Posse is hit and miss. Faring best are Billy Zane (who provides a fun villain turn), Tiny Lister (playing against type as a scared strongman/enforcer), Blair Underwood (as the seemingly respectable ally that’s more than who he seems) and Richard Jordan (as the slimy corrupt sheriff). The movie has a fair share of stunt casting, too, with rappers Tone-Loc and Big Daddy Kane playing members of the titular posse. They’re not great. Also not great is the film’s complete waste of its talented “elder statesmen” supporting cast of genre legends like Melvin Van Peebles, Reginald VelJohnson, Isaac Hayes, Woody Strode, Richard Edson, and Pam Grier. They don’t have much to do (especially Grier), which feels like a real missed opportunity. Even at 111 minutes, Posse is too damn busy for its own good. Part of the joy of Westerns is to be able to luxuriate in the genre’s tropes and there’s little of that to be had in this film. I don’t feel like I know any of these characters in the end any more than I did in the beginning.

Posse feels like a movie that went off the tracks especially when you read the caption closing the film that highlights that there were over 8,000 black cowboys in the Old West whose stories had never been told due to omission by Hollywood and others. It raises the question: why not tell one of those stories instead of a manufactured fantasy clumsily told?

Note: My favorite thing about Posse is this piece of trivia I found on IMBD. Who knows if this is true, but I certainly hope it is:

A production assistant was specifically assigned to follow Tone Loc around between set-ups as he constantly wandered off-set, usually to the craft service table.
Posted by Patrick Bromley at 5:00 AM