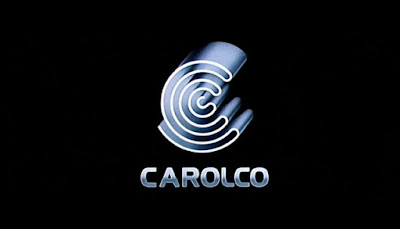 A summer-long celebration of the films of Carolco Pictures kicks off with 10 things about Cliffhanger.

1. Cliffhanger has one of the greatest trailers of all-time. The cinematography! The music! The thrills! The spills! The chills! That “HANG ON!” tagline! My only complaint is the trailer ends with Stallone jumping a mountain and that moment isn’t in the movie. This always frustrated me. Turns out the filmmakers cut it from the movie after people laughed derisively at a test screening.

2. The opening scene is incredible. Poor Sarah, falling thousands of feet to her death. On the bright side, the worst thing that could have ever happened to her happened so now she doesn’t have to be afraid anymore. 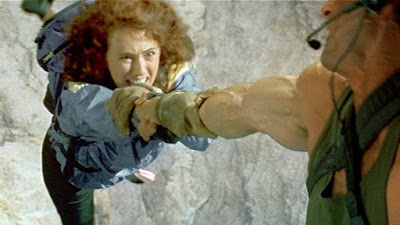 4. Carolco Pictures and Sylvester Stallone didn’t initially intend to make Cliffhanger. Stallone-Carolco projects that fizzled out before Cliffhanger were - a) a comedy with John Candy (directed by John Hughes) about feuding neighbors called Bartholomew Vs. Neff, b) a genetically-created monster on a runaway train movie called Isobar co-starring Kim Basinger and c) a Renny Harlin “Die Hard in a hurricane” flick called Gale Force. When that movie didn’t pan out, the Gale Force team moved on to Cliffhanger. 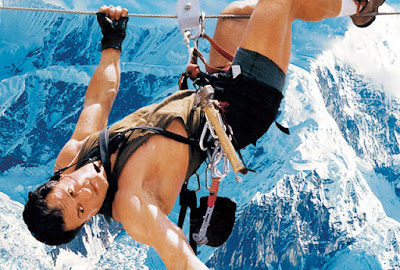 5. This was one of my two birthday movies in 1993 (the other was Hot Shots! Part Deux). I remember wanting to see Super Mario Bros. but was vetoed after my kid party by my two uncles who took me to see Cliffhanger instead. They told me after the movie that Cliffhanger was bad and I was like “Well, you paid for it, so I guess I have to agree” but I knew in my heart that Cliffhanger worked.
6. Cliffhanger is the last movie to use the 1984 Tri-Star Pictures logo. I used to love seeing that logo because (just like the Carolco Pictures bumper) it meant you were gonna see some grown-up shit (violence, sexual situations, pervasive strong language).

7. The worst villain in Cliffhanger is Delmar (Craig Fairbrass) because he won’t shut up about being a striker. Michael Rooker’s send-off line of “Season’s over, asshole!” is pretty good. I would have said “Go eat an orange slice, you f**k!” because when I played soccer as a kid, they always gave us orange slices after the game and I was like “I don’t want one.” 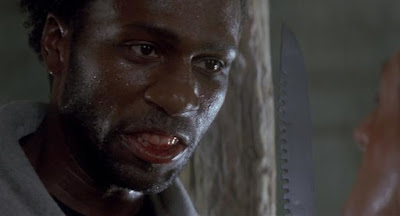 8. Kynette (played by Leon) is the scariest villain in Cliffhanger. He should have been the main bad guy instead of a henchman. Eric Qualen (John Lithgow, who was a last-minute replacement for Christopher Walken) kinda sucks. BTW…being a criminal mastermind seems stressful. You also need to be a project manager and a team supervisor.

9. When I was around middle school age and starting to watch R-rated action movies, I was very sensitive to when characters who didn’t deserve to get killed got killed. Cliffhanger had a few of these, including Brett (Trey Brownell), the thrill-seeking mountain climber-skydiver, and old man Frank (Ralph Waite), the search-and-rescue helicopter pilot who just wanted to paint.

10. Prolific character actor Rex Linn (who plays disgraced U.S Treasury Agent Richard Travers) says “G-D Dammit!” a lot in Cliffhanger. He says it so much that every time I see him in another movie, I end his sentences in my head with “G-D Dammit!”
See you next time when we gather back around the campfire to talk about the Carolco classic Basic Instinct!
Posted by Patrick Bromley at 5:00 AM