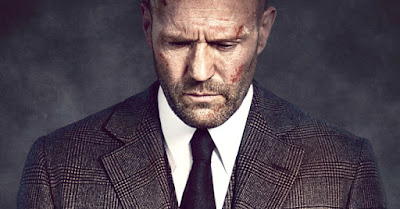 It may seem like damning a movie with faint praise to refer to it as "Guy Ritchie's best." He's a filmmaker whose body of work can most generously be called inconsistent, with fewer than five I'd say I genuinely like. He's spent the last decade or so making big-budget blockbusters, a genre for which he's particularly poorly suited -- movies like King Arther: Legend of the Sword, his two Sherlock Holmes movies with Robert Downey Jr., and the execrable Aladdin. Only his 2015 adaption of Man From U.N.C.L.E. worked in a quirky, funky way, and when he attempted to go back to basics and make a real "Guy Ritchie movie" with The Gentlemen, the results felt like fan fiction -- the sort of crime picture that polluted the marketplace in the post-Tarantino landscape of the late '90s and early 2000s. It's this pollution for which Ritchie is often and unfairly blamed. 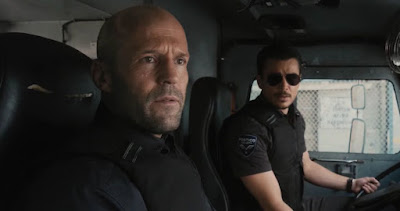 With Wrath of Man, Ritchie returns to the crime genre, but now comes at it from a different angle. There's nothing arch or comic here. This is some dark and serious shit. Gone is Ritchie's usual reliance on bullet comedy, in which characters either want to kill someone or don't want to be killed and victims are shot as punchlines. Gone are the larger-than-life and colorful characters. In its place is a grim, violent tale that's part revenge story, part heist picture. The screenplay by Ritchie, Ivan Atkinson, and Marn Davies still relies on somewhat labyrinthe plotting and skewed chronology, but here feels less gimmicky and more satisfying than in films past. Whatever it is he's now doing differently, it's working.

Reuniting with Jason Statham is a good first step. Ritchie is the director who helped make Statham a star in movies like Lock, Stock, and Two Smoking Barrels and Snatch, but the pair have largely parted ways ever since as each has pursued big Hollywood projects, with the exception of that one time they reunited for the Kabbala-influenced Revolver, maybe the weirdest failure on Ritchie's resume but one of the more interesting ones at that. Here, Statham plays a man called only H, who goes to work as a security guard at a Los Angeles-based cash truck company. He's mysterious and seemingly overqualified, probably because he's there for very specific reasons, which I wouldn't dream of spoiling here. The film has a rather simple premise, but goes about revealing that premise in a slow and deliberate way, only revealing a little bit of information at a time. It's a more compelling way of telling a story we've all been told before. 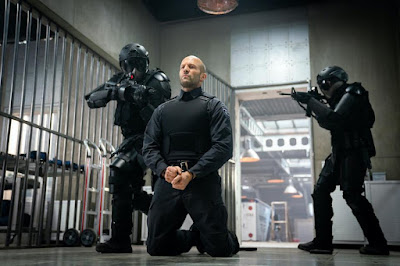 Ritchie still has some tendencies I could do without, chiefly the dialogue in the first third of the film. It's rough and requires getting past for what is otherwise an excellent crime film. Statham, who is always good at delivering exactly what we want from him, is particularly good here as a coiled cobra just waiting to strike, all patience and intensity. The supporting cast, populated by familiar faces (everyone from Josh Hartnett to Jeffrey Donovan to Post Malone), is a little more uneven, though none of the weaker links have a big enough role to derail the whole thing. As an ensemble, the whole is greater than the sum of the parts. The real standout is the score by Christopher Benstead, with a memorable cello line that's equally tense and exciting and altogether gorgeous. 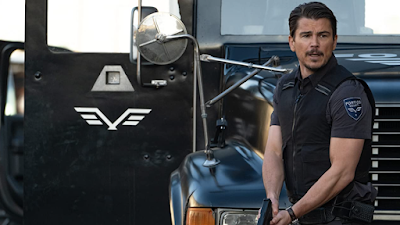 After a decade spent punching above his weight and making movies that are trying to be so much bigger than they need to be, it's great to see Guy Ritchie back making a movie that knows exactly what it's trying to do and executing it so well. Wrath of Man may not convert any new fans of the filmmaker, but it's a very good crime picture that's both right in his wheelhouse and dares to be darker and more adult. It's Man on Fire meets Heat by way of Guy Ritchie, and I can't blame you if that doesn't sound like your shit. Turns out it's totally mine.
Posted by Patrick Bromley at 12:00 PM