Movies is Good: THE GOOD, THE BAD, AND THE UGLY 4K

This week I come riding into town on my horse, looking for a very specific grave while harmonicas and a female chorus scream on the soundtrack.

Kino-Lorber’s new 4K Blu-ray disc of Sergio Leone’s The Good, the Bad, and the Ugly is cause for celebration. I know this because as I watched it, I tweeted on the Twitter machine that it was “one of the most beautiful things I have ever seen.” Immediately, Kino-Lorber retweeted my tweet on the Twitter machine; they know which side their bread is buttered on.

Other pundits from the small, western town of Film Twitter Gulch (Population: 11 — you, and ten other people who usually think you’re wrong) weighed in and tweeted their own tweets on the Twitter machine. Everyone agreed that the new transfer looked great. One person tweeted to say that some sort of red/yellow/green matrix had “finally been fixed.” Another person tweeted that he had a problem with “black crush.” I don’t know what either of them is talking about.

Early word was so positive that there was something like a run on the disc at retailers. The Digital Bits is reporting that many stores, both brick and mortar and online, are already out of stock. Don’t pay inflated prices on eBay, though; Kino-Lorber is making more. 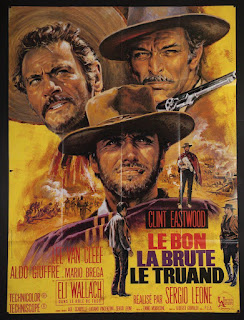 The Plot in Brief: We meet three men with various readings on their respective moral compasses: Blondie, “the Good” (Clint Eastwood); Angel Eyes, “the Bad,” (Lee Van Cleef); and Tuco Benedicto Pacífico Juan María Ramírez, “the Ugly” (Eli Wallach). The men share violent adventures together during the waning days of the American Civil War. Angel Eyes is hunting down former soldiers who have heard of a stolen cache of Confederate gold. Blondie, meanwhile, poses as a bounty hunter, bringing Tuco to justice in various towns and collecting the reward. Blondie and Tuco are in cahoots, however, and Blondie is always there to save Tuco from the hangmen’s noose, so that they may ride to the next town and perpetrate the same scam again. Once Blondie and Tuco learn of the buried gold, it becomes a race to see who can find it first. That doesn’t mean, of course, that Blondie can’t comfort a dying soldier along the way. When the soldier dies, Blondie takes his fringed blanket poncho, creating one of the most iconic costumes in all of film history.

The opening credits of The Good, the Bad, and the Ugly are so distinctive and iconic—bold white-on-red animation depicting a crazed rider on a crazed horse, with Ennio Morricone’s crazy score blasting away—all I can think to compare them to are the first few James Bond opening credit sequences, created only two years before. Both styles of credit sequence promise us something outsized, something over-the-top, something that rides right up to the line that separates the ordinary from the absolutely fucking ridiculous. Leone’s film screams at you, “Hey! Look over here NOW!” This is a great start to a great movie. 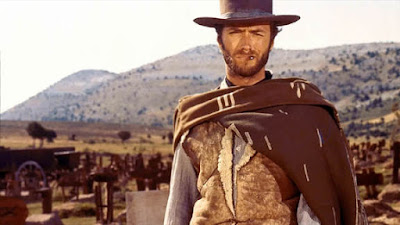 The Good, the Bad, and the Ugly is a film that changes every time you see it. I’m not referring to a film where one notices different things at every screening; I’m talking about one of those films where, during repeated viewings, the order of events in the narrative always seems to be a surprise. Any film that can sustain this “plot freshness” over many, many viewings seems to be a kind of magic trick.

The Good, the Bad, and the Ugly also contains one of my favorite lines of dialogue in any movie. Scummy villain Tuco is shown finally taking a bath... while men creep up to kill him. A literal one-armed bandit makes his way to Tuco’s tub and explains to him, “I've been looking for you for eight months. Whenever I should have had a gun in my right hand, I thought of you. Now I find you in exactly the position that suits me. I had lots of time to learn to shoot with my left!” Tuco reveals that he has a gun in his tub and shoots the man dead, then says to the corpse, “When you have to shoot, shoot. Don't talk.” I love that line so much that I texted it to my son without any explanation as I watched the film. In less than 30 seconds, he texted back, “Bathtub scene, right?”

I raised my boy right.

Tim Lucas’s previous Blu-ray commentary track has been ported over to the new disc and it is a thing of beauty. Production details, cast biographies, subtext, trivia, critical perspective… Lucas is the master of them all. He tells the story of Sergio Leone wanting to reunite the title characters of The Good, the Bad, and the Ugly for the opening sequence of his next film, Once Upon a Time in the West. Leone wanted the three hired killers who meet Charles Bronson at the train station in the film’s first sequence to be played by Eastwood, Van Cleef, and Wallach! (SPOILER ALERT for Once Upon a Time in the West: The three are shot dead in the first ten minutes.) This would have been one of the greatest cameo appearances in the history of film! Eastwood said no. I gasp to think about what might have been.

I know that some people are still sitting on the fence about upgrading to 4K. This is the disc that should push you off the fence, right into the Confederate encampment that’s just about to be blown up with dynamite by Blondie and Tuco as they search for the hidden gold. This disc is reference quality; you can use it to convince other movie buffs to upgrade. These new converts to 4K will praise your influence; they will say that you have done a GOOD deed. Now that you have shown them this disc on properly calibrated equipment, they will want this new 4K disc BAD. They will become sick of their current video set-up, which, compared to yours, now looks UGLY.

I’m sorry. When I want to watch, I should watch. Not talk.
Posted by Patrick Bromley at 5:00 AM