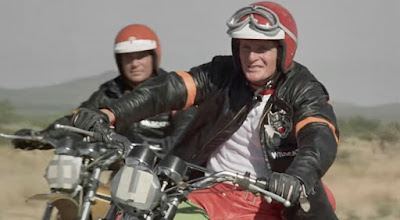 After bursting onto the scene in the Joseph Sargent-directed feature-length Kojak pilot The Marcus-Nelson Murders, Marjoe stuck with the format and joined a cast of huge names from the television world in the made-for-TV movie Pray for the Wildcats. By 1974 Andy Griffith was one of America's favorite “Gee-golly” guys, having starred in The Andy Griffith Show for most of the '60s. In the early '70s, Griffith was still exclusively working in TV with guest spots on shows like Mod Squad, Hawaii Five-O, and a few ill-fated takes on his Andy Taylor character. He also started appearing on made-for-TV movies like The Strangers in 7A with Ida Lupino, the troubled-teen movie Go Ask Alice (also starring William Shatner), and the sniper movie Winter Kill. Shatner, of course, had made a name for himself as Capt. James Tibirius Kirk in Gene Roddenberry's Star Trek. On top of his numerous television appearances, Shatner had also appeared in a handful of genre movies including the ever-relevant and terrifying Roger Corman film The Intruder, Leslie Stevens' Incubus (filmed entirely in Esperanto), and in the Joseph Cotten-starring western White Comanche, where he played the dual role of good brother/bad brother. Robert Reed was America's favorite dad, Mike Brady from The Brady Bunch. Before becoming busy with three boys of his own and marrying Carol, Reed was a regular face on television, appearing in dozens of shows but most notably as Kenneth Preston, starring opposite E.G. Marshall as a father/son legal team in Reginald Rose's The Defenders. 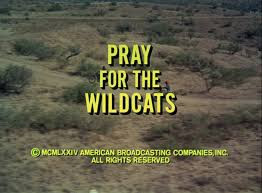 And then there was Marjoe. While his co-stars in Wildcats were veteran actors by 1974, Marjoe was the new kid on the block; a charming, good-looking hippie type that attracted a younger crowd than, say, Andy Griffith. Pray for the Wildcats is about a business tycoon named Sam Farragut, played by Griffith, who plans to hire the ad agency where the three others work on one condition: the ad-men must accompany Farragut to the Baja Peninsula on a cross-desert dirt bike trip in order to show them where he plans to build his new business. Shatner plays Warren Summerfield, a senior executive at the agency who has just been laid off. His boss has agreed to let him land this final big fish client in order to send him off with high marks and a cherry commission. Being a career man, though, Summerfield is not taking the news lightly, refusing to tell his wife (Lorraine Gary in back-to-back appearances with Marjoe), and ultimately taking out a sizable life insurance policy on himself because he's planning on committing suicide and calling it an accident on the motorcycle trip. Reed plays Paul McIlvain, Summerfield's partner, whose marriage is on the rocks because, as it turns out, his wife (Angie Dickinson) is having an affair (with who, I'm not saying). McIlvain, while hesitant about the trip, thinks it will be good to be apart from his wife for a bit, hoping to reconcile upon his return. Marjoe is Terry Maxon, the young hotshot graphic designer of the team. He's impressionable and willing to do anything to further his career. His girlfriend (Janet Margolin) tells him she's pregnant as he's packing for his boys' trip. This doesn't sit well with Maxon, whose sights are fully set on climbing the corporate ladder, and suggests she should get an abortion because he's not ready to be a father. 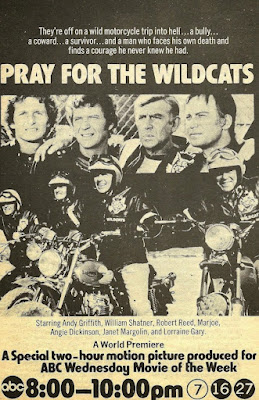 After arriving in Mexico, the three ad-men start to realize their potential client is a bit unhinged and unpredictable. Brash, outspoken, offensive, and downright confrontational, Griffith's Farragut is very reminiscent of his character “Lonesome” Rhodes from Elia Kazan's A Face in the Crowd. Just like the earlier character, Griffith proves that he's not just a happy-go-lucky Southern hick looking at the world through rose-colored glasses. Because of this, I urge anyone who only knows Griffith as Andy Taylor or Ben Matlock to seek out movies like Face and Wildcats. Tensions flare as Summerfield begins to work up the courage to off himself “accidentally,” Maxon starts following Farragut's lead blindly, and truths are revealed. After Farragut terrorizes a hippie couple on the beach which directly contributes to their death, Mexican police get involved and Summerfield and McIlvain now must figure out how to get out of this situation alive. 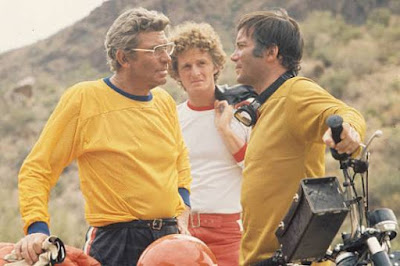 As I've said in the past, television programming of the '70s was a wild frontier. Watching a movie like Pray for the Wildcats proves that the subject matter and tension involved in this story could not be found anywhere today on the three big networks. Watching a bigoted, misogynistic one-percenter can be found all over the evening news, but that type of cynicism wouldn't be found in primetime on ABC in 2022, which is when and where this originally aired but in 1974. Pray for the Wildcats is full of that 1970s cynicism – or what I call realism, which is why I think I gravitate towards '70s movies and TV. The ending of the film alone is exactly how I hoped the story would end. Try as I might, life ain't full of ponies and rainbows, and sometimes I just have to take what I get. There is sunshine to be found amidst tragedy, though, and it is possible to see that at the end of Pray for the Wildcats.
Posted by Patrick Bromley at 5:00 AM