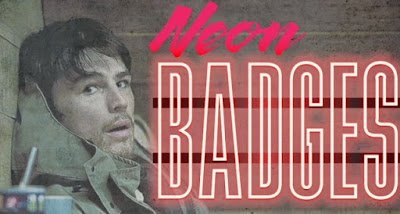 Filming for 30 Days of Night got underway in August of 2006 in Aukland, New Zealand. During location scouting, the crew had found an abandoned equestrian center outside Aukland that was surrounded by acres upon acres of empty, flat land. Using comic book artist Ben Templesmith's original art, as well as pictures of the actual town in Alaska, production designer Paul Austenberry went to work building the town of Barrow, and in many cases, created exact replicas of the actual buildings. One major problem stood in their way, though: the ceiling of the equestrian center wasn't high enough to rig stunt wires, lights, and cameras. So instead of tearing off the existing roof and building up, production decided to go the opposite way. Excavators were brought in to dig down 30 feet, eliminating the need to rebuild or reconstruct the entire facility. As for the snow, temperatures in Aukland rarely dipped below 45 degrees Fahrenheit, so they couldn't depend on Mother Nature to supply the white stuff. While most of the shooting did take place at the equestrian center outside Aukland, many scenes (especially those taking place outside the town) were shot at Waiorau Snow Farm on the south island of New Zealand in the town of Wanaka. All the scenes at the snow farm were shot in broad daylight and then graded in post-production to make it look like night. But back in Aukland, they were faced with a challenge. How do we make snow so that it doesn't melt or so it looks realistic? The solution ended up being quite simple. The snow outside covering the ground would be comprised of a snow blanket with mounds of paper creating the snow banks. Snow blowing around during shots of the blizzard would be soap bubbles. Any snow that made its way inside the buildings would be epsom salt. And in one specific scene, where Stella and the little kid are hiding under the car, they're lying in silica gel. There was no need to figure out how to refrigerate an entire warehouse in Oceania and bring in snow machines. Instead, they simply used products that could be found at craft stores. 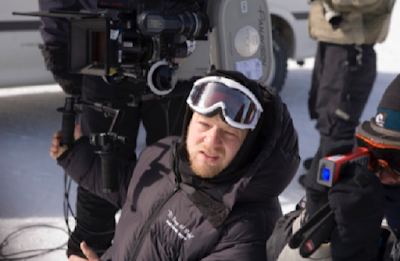 The very first scene director David Slade shot for the movie was the beheading of the little girl in the general store. Special effects (both digital and practical) were handled by Weta Workshop, the effects and prop company most known for their work on Peter Jackson's The Lord of the Rings series. For the little girl, special effects technicians took a lifecast of her, put a slit where the axe would hit, filmed that portion, and then superimposed that footage over footage of the actual girl in post-production. While much of the special effects and make-up is practical, there was no getting around the fact that digital effects were going to also be a big component of this film. Something as simple as the breath, even: all the fog and steam you see coming from people in the film is all CGI. Josh Hartnett sat for hours in the makeup chair for the final shot where he's covered in a tar-like substance. Unfortunately it was all for naught as the makeup wasn't showing up very well on camera so they ended up doing it all digitally in post. The vampires: everybody wore the black contact lenses which, along with the practical make-up and prosthetics, made the actors and stunt people very scary looking. In post, though, to add to the menacing look, technicians widened the bridges of the actors' noses, moving the eyes apart, giving the 30 Days vampires a very unique and unmistakable look. There was a problem with the contacts, though. While scary-looking, the lenses themselves were much bigger than normal and ended up covering the entire eyeball. This then caused every actor that wore them to develop some sort of conjunctivitis. A great example of the use of practical effects in the film, though, is when Mark Boone Junior's character is killed. After he rams into the building with his snowplow and comes out on fire, he collapses in the snow, most of his body is charred but still alive before Marlow comes up and stomps on his head. A lifecast was made of Boone Junior's head with the added burn marks and a collapsible piece in the skull for Danny Huston's foot to smash through. Other than color grading, this wasn't enhanced digitally at all. 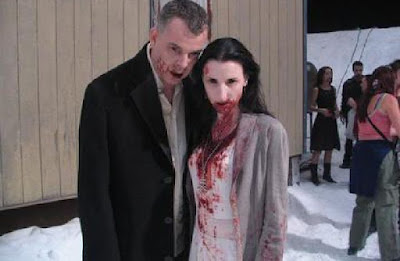 Slade's cinematographer on 30 Days was his longtime collaborator Jo Willems, whom had shot several of Slade's music videos and Hard Candy. They knew each others' style and had their own language with one another, like a shorthand. Willems' approach to shooting this film – entirely different than Hard Candy, which primarily took place inside one section of a house – was to look at the whole environment. He would have wide shots of the Alaskan landscape. He'd have very intimate interior shots with people crowded into an attic. And he'd get to shoot an entire town on fire. (For the burning buildings, they actually did several takes. The fire department on hand would put the fire out, and then production designers would get to work adding flame gel, retouching the paint, and then burn the whole thing again.) Before day one of production, Slade and Willems tested 35mm and digital. Both were proponents of shooting digitally as it would have allowed them to shoot in lowlight, ultimately reducing costs since they wouldn't need a big lighting package. But, as most filmmakers do, Slade and Willems loved the look of shooting on film, so they opted for the higher cost of 35mm.

As stated in part one, most of the cast and crew were New Zealand-based, with all but two of the vampire crew professional stunt people. While a few instances in the film needed actors to be harnessed and strung up with wires, most of the stunts happen sans wirework. What we see in the movie are acrobats doing what they do best. Air-powered springboards would propel stunt people through the air, flipping and contorting their bodies over moving cars. They would jump, unassisted from structures and land on their feet or roll through the fake snow. Stunt coordinator Allan Poppleton had assembled a literal circus. Josh Hartnett even got in on the action doing all his own stunts. During the final fight sequence, Hartnett was wearing a harness hooked up to a pulley system where stunt techs would fling him across the air or drag him around the ground. Early on in the film where Hartnett and Melissa George are in his jeep and they end up flipping the vehicle, the two actors were the ones in the car with Hartnett driving. They ended up doing that stunt five times, each time with the stars of movie in the vehicle. 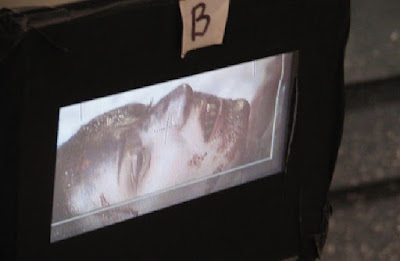 Character actor Ben Foster was an actor that took his job very seriously. The opening scene finds his character of the Stranger looking over the frozen sea and finding his way into Barrow. To get the feeling of how cold this person must be, Foster filled his underwear with snowballs to shoot that scene. And when Eben shoots the Stranger, in order to show real pain, Foster had a heavy duty clamp attached to his foot. In the third act, when Eben injects himself with the vampire blood, Hartnett wanted to make that scene look as authentic as possible. So he spoke with a friend of a friend who had a heroin addiction and accidentally shot bleach into his arm one time. Hartnett asked his friend what that was like and he said he went into total body seizures where everything freezes and you can't do anything to stop it. Another unique thing that happened that impressed David Slade was how all the actors stayed on set even when they didn't have to. While shooting close-ups of a character speaking, a lot of times the actor is reacting to someone else reading the line, or more often than not they're reacting to nothing at all. In this case, though, each actor would do their line readings with their scene partner in order to get better, more authentic reactions from the actor on camera.

While morale was generally high and everybody got along splendidly, 30 Days of Night proved to be an extremely tough shoot for all involved. As the title says, the entire story takes place at night, and other than the scenes filmed at the snow farm, they shot at night. For six weeks, 47 nights, 6pm-6am, cast and crew lived as vampires. The only source of light these people saw came from the two moon boxes designed by gaffer Sean O'Neill. “It obliterated any type of life I had,” says Danny Huston. Over 20,000 cups of coffee were consumed. “Having no life except for the work life makes you go a little bit crazy,” remembers Hartnett. In fact, it affected the lead actor so much that he developed mono while shooting. He couldn't hear himself think, let alone receive direction. This led to Hartnett being sidelined from production for two weeks. Not sidelined from work, but because he was traveling back and forth across the world for press junkets for The Black Dahlia premiere.

30 Days of Night opened on October 19, 2007 on more than 2,800 screens alongside Ben Affleck's Gone Baby Gone. 30 Days held the number one spot at the box office that weekend, bringing in $15.9 million. Critics, while unimpressed with its originality, generally liked it. Roger Ebert of the Chicago Sun Times gave it 2.5 stars, calling it “a better than average example of the genre, even if it follows the time-honored pattern of supplying a macho man who gathers a hardy band in hiding while the vampires snuffle about.” He praised Danny Huston, saying he was “actually quite convincing in the role.” He goes on; “The most interesting aspect of the movie is Barrow itself... I award the movie two and a half stars because it is well-made, well-photographed and plausibly acted, and is better than it needs to be. I have pretty much reached my quota for vampire movies, but I shouldn't hold that against this one. If you haven't seen too many, you might like it. If you are a horror fan, you will love it.” Ann Kelly from the BBC praised the film, giving it four out of five stars. “The film gets its set-up in place with remarkable efficiency, bringing Barrow and its people alive with minimum screen time before plunging whole-heartedly into vampire carnage. Fantastic set-pieces, like an aerial view of the (black-eyed fangy Russianish goth) vampires tearing the townsfolk to shreds, grind home the peril... When it gets back into the action, it storms along, shocking with casual yet extreme gore (including what must be one of the best screen decapitations ever), and amusing with humor so very black that you're ashamed at having laughed. For its final third, 30 Days Of Night strikes out a nerve-jangling, bloodily unpredictable route to a truly stunning ending that's well worth the wait.” And Ty Burr of the Boston Globe awarded the film 2.5 stars, calling it “a proficient, atmospheric fangfest that does nothing you haven't seen before but still does it passably well... 30 Days builds slowly and eerily to an early pitch of cover-your-eyes carnage.” And finally calling it “stylish in a doomy, shallow, graphic-novel way, and despite regular dips into gore its better moments are quiet ones.” 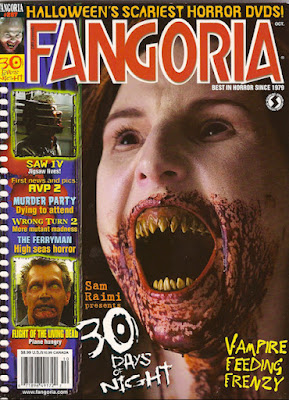 All in all, everyone involved was quite pleased with the final product. Producer Rob Tappert believes Slade got everything he wanted in front of audiences. “David had a vision and he got that vision on screen.” 30 Days of Night went on to spawn a prequel miniseries in 2007 called Blood Trails and a sequel miniseries called Dust to Dust in 2008, both released on FEARNet. In 2010, a direct-to-video sequel movie called 30 Days of Night: Dark Days was released, officially giving the original film its cult status.
Posted by Patrick Bromley at 5:00 AM