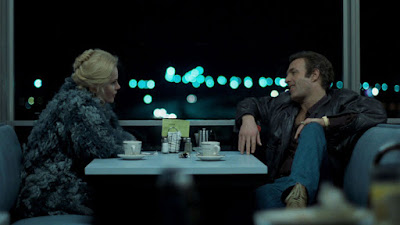 As you may know, my wretched life has been devoid of meaning for the last several years. Why? Well, because the only film festival that matters, Noir City, has been absent from the Music Box Theatre in Chicago all because of a dumb little disease and its status as public enemy number one. Not anymore, I’ll tell ya. The sour little apple of my eye returned at last, and I was there! I saw it all! You can’t make me hold my tongue, er, pen any longer! The world will know, by golly, if it’s the last thing I ever tell ‘em.

Running from August 26th – September 1st, the extravaganza featured a whopping 21 films hosted by the Film Noir Foundation’s Eddie Muller and Alan Rode. Read on for the highlights and low downs.

This played to a nearly sold-out and enthusiastic crowd as the opening to the fest, and the first half of a double header honoring the recently departed James Caan. If you’ve never seen this, the most basic plot is this: A safe cracker (Caan) falls in love and decides to do one last job. Things go awry.

I’ve loved this movie since I first saw it – how can you not? Besides Caan, who I’d argue is at his career best here, you’ve got the Tangerine Dream score, the rain soaked neon of the Chicago streets, the diner scene with Tuesday Weld, the… thing that happens… to the Green Mill, Willie goddamn Nelson, Jim Belushi—it’s perfect. And there is something special about a Chicago crowd loving a Chicago movie and cheering when Dennis Farina’s name comes up in the credits.

This time, probably benefiting from the big screen treatment, I was struck by the way Mann filmed that pivotal safe cracking scene. It goes on for a long time, no dialogue, lots of sparks, lots of heat, at last – the inner sanctum is penetrated. And then? Caan pulls up a chair and smokes what feels like a post-coital cigarette. Brilliant. 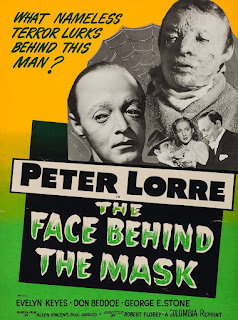 Peter Lorre stuns as an immigrant who arrives in America full of optimism, but on his first night ashore his boarding house catches fire and his face is badly burned. He turns to criminal activities in hopes of paying for plastic surgery. In the meantime, he wears a mask to cover his disfigurement. He crosses paths with a blind woman (Evelyn Keyes) who loves listening to the radio and they form a bond. But this is a noir, so happy endings are right out. This movie’s ending goes about as hard as I’ve ever seen. Damn. Makes the most of its 69-minute run time, and might be a better Lorre performance than M, which is saying something.

Best Use of Marie Windsor: The Sniper, 1952, directed by Edward Dmytrik (available on DVD as part of the “Columbia Pictures Film Noir Volume One” boxset) 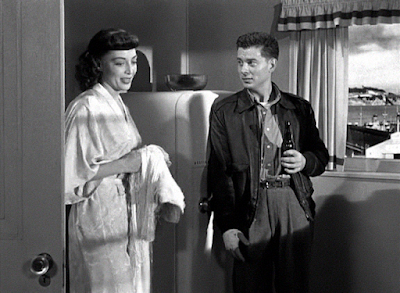 A serial killer (Arthur Franz) targets women as his victims and sends anonymous notes to law enforcement begging them to stop him before he kills again. Marie Windsor, who plays a memorable role in The Killing, gets to be a more likable sort here. She’s got a great apartment, a glamorous wardrobe, the headlining act at a piano bar, and a boyfriend who’s going to take her on vacation. Unfortunately, she’s also got a creeper picking up her dry cleaning and stalking her from afar.

This movie feels ahead of its time, and was one of the earliest movies to feature a serial killer as the main character. He seems like an early incarnation of an incel—the title card reads “a man whose enemy was womankind” -- and the movie doesn’t make excuses for his misogyny. Instead, it interrogates it and shines a light on the casual misogyny of other men in the movie. There’s a particularly memorable exchange between two working men. One brings up the killer, and the other muses, “Dames never done me no good. I’d give him a few addresses!”

As a bonus, this film also features a VERY adorable cat named Asa, who happily does not come to any harm whatsoever. 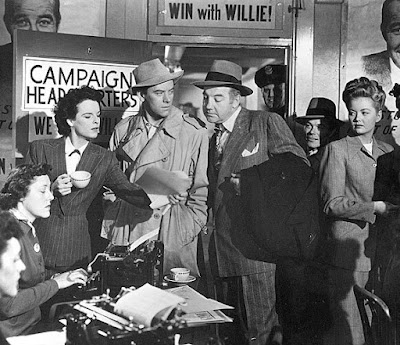 A small town politician (Broderick Crawford) fights the establishment and gains popularity. As his power grows, his ethics become murkier. This one really felt prophetic, although of course we know politics is a dirty business and history tends to be cyclical. There’s a fine line between a champion of the people and an unstoppable demagogue, and by the time his early advocates come to their senses they’re dug in too deep to tell the truth about who he really is. Sound familiar?

Mercedes McCambridge has a supporting role here as a firecracker of an advisor, and she’s got an adorable hairstyle to boot.
Best Hardboiled Dialogue: Dr. Broadway, 1942, directed by Anthony Mann 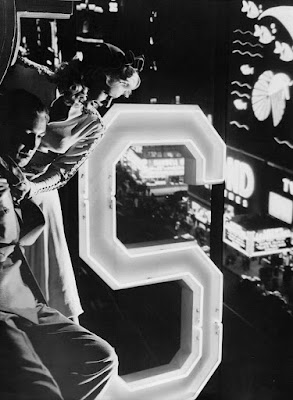 Eddie Muller described this in his introduction as “the rarest film in the program” and backed up this claim by showing an original print that looked squeaky clean. The debut from a filmmaker who would go on to be renowned for a number of noir pictures (T-Men, Raw Deal) and lots of Westerns, this one packed in the humor between its punches and suspense. Speaking of punches, within the first ten minutes our hero socks a woman in the face—twice!

Our basic story is this: A dashing doc (MacDonald Carey) with many famous and infamous patients talks a woman (Jean Phillips) out of jumping to her death and does a favor for a gangster, leading to complications. I won’t go into much more plot—it’s hardly the point. In fact, this movie was intended to kick off a series of films following the titular Doctor Broadway on his misadventures in New York City. Instead, here are a few choice quotes:

“A girl’s gotta eat! It’s a habit I picked up as a child.”
“With friends, I never cut liquor.”
“No, just throats.”
“Well, that’s business!”
Camera man, after the woman gets rescued from the roof:
“Ahh, so now she ain’t gonna die! You just can’t depend on women!”
“Say ah.”
“Ahh.”
“Think of Charles Boyer and say ah.”
“Ahhhhhhh!”
You get the idea. 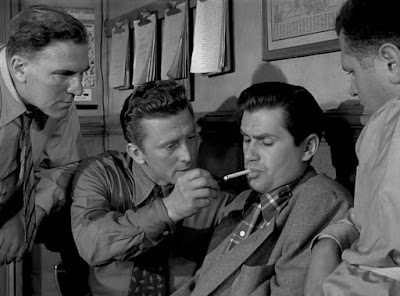 Kirk Douglas and Eleanor Parker have top billing in this film (adapted from a Sidney Kingsley play). An evening inside a busy police precinct includes a shoplifter, an embezzler, a pair of burglars, and a doctor who operates outside the law that may have a personal connection with a member of the force.

Bendix usually plays a heavy, but in this film he goes against type as a sensitive cop who urges leniency for a first time offender that reminds him of the son he lost in the war. Douglas is his partner, whose gray matter has no room for gray areas—except when it comes to police brutality. The play was able to be more explicit in its themes (which included abortion); the movie had to work within the code and thus relies more on implication but you still get the gist when watching. It also manages to deliver a pretty powerful ending.

Best Movie to Double with Nightmare Alley: Night Has a Thousand Eyes, 1948, directed by John Farrow 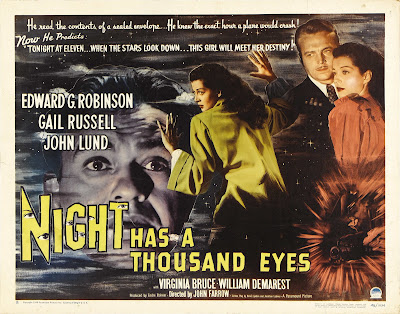 A mentalist (Edward G. Robinson) is unsettled when his premonitions come true. He withdraws from the world, but a persistent vision of a woman's murder brings him out of retirement. It’s a neat little story, at times feeling like an extended Twilight Zone episode, and its source material is a Cornell Woolrich novel so you know it’s gonna be good. Much of it was filmed on location in LA’s Bunker Hill neighborhood, which no longer exists—so that in itself is worth the price of admission (especially if you, like me, are a fan of Los Angeles Plays Itself). 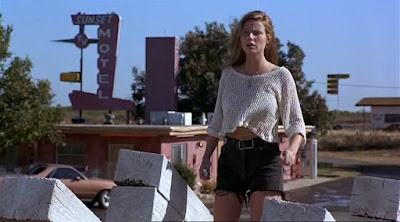 A home invasion gone wrong leads to bloodshed; years later, coincidence brings the survivors together. That’s about all I’m willing to disclose of the plot, but you should know the stars of this movie are none other than Meg Ryan and Dennis Quaid as a romantic pairing. James Caan plays a mean SOB who happens to be Quaid’s father, and pre-GOOP Gwyneth is a pouty, nihilistic, sarcastic troublemaker who keeps popping up unexpectedly wearing the cutest outfits and stealing things.