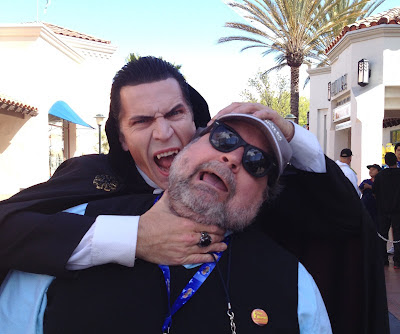 “The king is always killed by his courtiers. He is overfed, overindulged, overdrunk to keep him tied to his throne.” – John Lennon, Newsweek, 09-29-80

I approached Baz Luhrmann’s new biopic, Elvis, with much antipathy and temerity. I have never liked Luhrmann’s work and find his adaptations of Romeo + Juliet and The Great Gatsby to be grotesque misrepresentations of two literary classics. What would Luhrmann’s patented, ADHD-influenced, “Who cares about facts when there’s EDITING TO BE DONE?” style do to the Presley legend? I am actually a big Elvis fan. How bad could this film be? 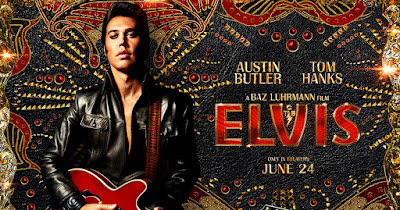 The film’s willful misrepresentations of fact are too numerous to catalog. I must blame Luhrmann, who is actually credited TWICE in the screenplay credits; I guess he was part of two different teams of writers who worked on the script. I understand that filmmakers are to be granted some artistic license, but come on! Too many scenes in the film are made up out of whole cloth: Elvis did not (conveniently) get into trouble singing the song “Trouble” at an early charity event because that song had not yet been written; Elvis is shown to be very good friends with BB King, when in fact they barely knew each other; Elvis is told he is the highest paid star in Hollywood, which was never true; Robert Kennedy was not assassinated during the taping of Elvis’s comeback special; the Colonel did not negotiate Elvis’s Las Vegas contract on a napkin while sitting in the audience during an Elvis show (because big-time show business managers love to mix business with pleasure... and there’s no quieter place in Vegas than the main showroom at the International Hotel during an Elvis Presley concert); and Elvis never fired the Colonel live onstage during a performance.

I do have it on good authority, though, that Elvis and the Colonel actually rode Ferris Wheels together all the time.

It bothered me that not one song is performed all the way through. This movie is 150 minutes long... surely there was time! “All Shook Up” clocks in at a peppy 1:52. Viva Las Vegas is a mere 85 minutes long but finds time to include 12 full-length songs. 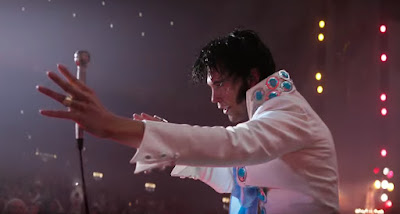 Speaking of Viva Las Vegas, the new Elvis movie yada-yadas Elvis’s entire 1960s moviemaking period with a short, cheesy montage. UNFAIR. Those movies are a lot of fun, have been enjoyed for decades, and are still entertaining people. In fact, that is this movie’s California connection: Elvis made all of his movies in Hollywood because his lying, thieving manager had no valid passport to leave the country. When the Presley estate sued the Colonel for gross management and financial malfeasance after Elvis’s death, Parker ingeniously argued that he wasn’t subject to American law BECAUSE HE WAS NEVER A CITIZEN.

Here’s an idea: instead of going with Luhrmann’s hyperbolic, short-attention-span-baiting production strategy, why not tell the life story of Elvis in the style of one of his own ’60s movies? That would at least be fun. After watching the film, I realized that everything Luhrmann dismisses with a quick montage, I would have dwelled on; everything he dwells on (the turgid melodrama of Elvis’s final years, for example) I would dismiss with a quick montage. I may be the prophesied “Anti-Luhrmann” of which the dark legends speak when summoned from the bowels of Dark Graceland. 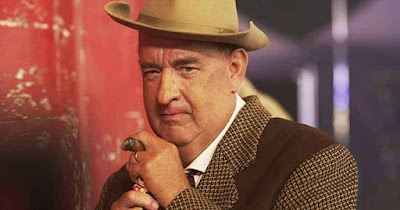 Luhrmann’s body of work is full of ludicrous imagery (I’m thinking of the title characters falling into a pool during the balcony scene in Romeo + Juliet or Nick’s last-minute addition of the word “Great” to the title of his manuscript in Gatsby) but you won’t find a more risible or head-scratching and odd image this year at the movies than Tom Hanks as Colonel Tom Parker, resplendent in his fat suit, roaming an empty casino and trying to place bets, wearing nothing but a hospital dressing gown and a morphine drip. Bet on black.

The performances in the film are variable. When the film was released, debate on the Twitter machine raged about whether Austin Butler’s turn as the title character was a full-blown dramatic performance or the workmanlike mimicry of your average Elvis impersonator. I tend to favor the latter, though the film does Butler no favors by focusing so relentlessly on only 1) young “Louisiana Hayride” Elvis and 2) middle-period, icon Elvis. We only get one scene with 3) Fat Vegas Elvis, and that features Elvis immobile at the piano, shown only from the waist up. I guess Luhrmann wanted all the fat suit glory to go to star Tom Hanks, who acquits himself nicely as the Colonel, though I could have done without his hyper-charged accent. (“Nobody talks like that!” as Jack Lemmon famously shouted in Some Like It Hot.)

Most other characters in the film are extras or ciphers. Elvis’s father Vernon could have been played by a department store mannequin. Jimmy Rogers, Little Richard, Fats Domino, and B.B. King are played by actors who look and sound nothing like the original performers. For a few moments, I was about to applaud the filmmakers for gender neutral casting because I thought their Little Richard was being played by a woman, but I was wrong. The only other performer to stand out in this tub of neon goo is Helen Thomson, who not only looks exactly like Elvis’s mom, Gladys, but brings a heavy dose of sadness to the role. I always thought Elvis’s mom seemed ineffably sad. 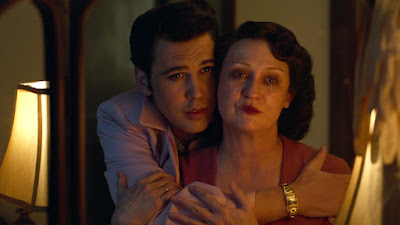 Ultimately, I think what sinks the film more than Luhrmann’s complete lack of insight into what made Elvis a touchstone of American popular culture—or his frenetic crazy cutting—is that the film relies so heavily on the laughable trope of Elvis as victim. This film’s Elvis is seen as being powerless in his business and private life. To maintain the simplistic narrative that the Colonel was A VERY BAD MAN, Elvis must be made to seem like a puppet with no will of his own. Granted, he is twice shown asserting himself: first, swiveling his hips at a charity concert though he was WARNED NOT TO EVEN WIGGLE A FINGER by the police; and second, by turning what was supposed to be a boring Perry Como-like Christmas hour into his famous 1968 Comeback Special. Still, it is worth noting that these two events never happened, at least not remotely the way the film presents them. Late in the film, Priscilla confronts Elvis about his drug abuse and Elvis looks like he doesn’t know what she is talking about. So... The Colonel fed Elvis all those drugs to keep him reliably performing, and Elvis had no say in the matter at all and thought it was normal? He was just doing what the Colonel and Dr. Nick told him to do? I call bullshit. Given Elvis’s massive drug consumption at the end of his life, he had to know what he was doing. My God, he could see and hear every day what it was doing to his body and his voice.

I hope the filmmakers behind 2007’s Walk Hard take particular delight in this film. Elvis achieves the dubious distinction of including tropes that Walk Hard parodied 15 years ago. We get the scene of female fans in a foaming frenzy during Elvis’s first concert appearance; a roadhouse where the African-American patrons come to dance erotically; a record producer giving Elvis “one more chance” to impress him; several versions of “You don’t want nothing to do with this shit;” and most famously, Elvis performing one song at the end that “will sum up his entire life and career.” It’s easy to parody a film that exists; Walk Hard succeeded in parodying a film that hadn’t yet been made.

And of course, in a bilious trope that is fast becoming a cliché in new Hollywood biopics, the real Elvis is trotted out in archival footage in the film’s final moments to... I don’t know. Remind the audience that Elvis was real? Give the audience some comparison fodder to judge Austin Butler’s performance in the title role? Wring some easy tears from Elvis fans by reminding us that he died? It’s weird. It’s like after subjecting us to an almost three-hour pandemonium shadow show, the filmmakers feel bad about what they have done and the extent to which they have misrepresented Elvis’s legacy, and decide to give the real Elvis a final bow...

But the real Elvis left their building a long, long time ago.
Posted by Patrick Bromley at 5:00 AM