Review: HONK FOR JESUS. SAVE YOUR SOUL 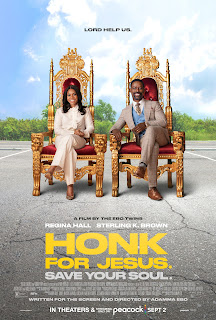 Sterling K. Brown and Regina Hall are appearing in a new feature film together. For most reasonable people, that’s more than enough incentive to check out Adamma Ebo’s new mocku-drama comedy, Honk for Jesus. Save Your Soul. The pair star as Lee-Curtis and Trinitie Childs, proprietors of a Southern Baptist megachurch that, in its heyday, boasted thousands of congregants who eagerly supported their lavish lifestyle in the name of holy servitude. Since Lee-Curtis’ sex scandal — involving multiple young male parties — however, the Childs have fallen from grace. Presented in part as a documentary with more traditional “narrative” footage interspersed throughout, Honk for Jesus. Save Your Soul (oof) chronicles the Childs’ efforts to rehabilitate their image in time for a grand re-opening on Easter Sunday. Can they overcome their marital strife, their soiled public personas, and the young, dynamic Keon and Shakura Sumpter (Conphidance and Nicole Beharie), whose own megachurch rose up in the meantime? 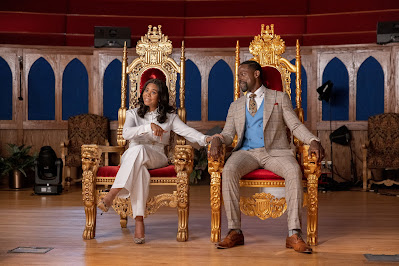 As you might imagine, the answer is complicated. Lee-Curtis is a born showman, an ostentatious raconteur who once knew exactly how to get an audience eating out of the palm of his hand. He wasn’t afraid to flaunt his designer suits and expensive watches — evidence of his faith, he tells his cheering masses — but he could also turn the penitence on like a spigot when it came time to be humble before the power of the almighty. Trinitie was the regal and adoring First Lady, nodding along with her husband’s sermons from a throne to the right of his altar. Since the scandal, however, Lee-Curtis’ proclamations of faith are reading like hollow bluster, and his wife’s refusal to confront his problematic proclivities is exposing her own weakness and complicity. They preen and posture for the cameras with the best of them — giving notes, of course, on which heckling protestors and outbursts of profanity should be cut from the film — but no amount of editorial manhandling can stop the uncomfortable truth from creeping out.

Ebo, who also adapted the screenplay for Honk for Jesus from her own short film, has a keen eye for satire and is clearly well-versed (pun intended?) in the various hypocrisies of megachurch culture. Though she threads an unnecessary “talk radio” exposition device to bridge some narrative gaps, her strongest bits are in the subtext, in creating situations for her buffoonish characters to undermine themselves rather than having external forces do the work for them. The Childs will do anything to avoid confronting the real issues at the heart of their broken lives, their pride so belligerent that they even attempt a full-scale church service for a crowd of five die-hard congregants. Lee-Curtis is far too self-absorbed for real insight (at one point yelling through a megaphone that his wife should “shake it for Jesus” on the curb outside their church), which leaves Trinitie’s disintegration as the real narrative thrust of the piece. Faithful though she may be, one can only look like a clown — literally, face paint and all — for so long. 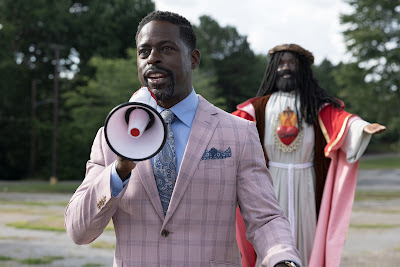 And while Honk for Jesus. Save Your Soul fails to break any new satirical ground — there’s about fifteen minutes of wheel-spinning that betray its short film roots — it’s still an incredibly well-observed and insightful opportunity for two stone-cold all-stars to put on a show. Hall and Brown are absolute delights in these roles, with Hall in particular shining the most when her character is stumbling to prop her oafish husband upright. Brown, on the other hand, oscillates perfectly between charming seducer (particularly when he’s trying to impress a young editorial assistant with his lackluster free-throws) and the dead-eyed flop sweat of a snake oil salesman collapsing under the weight of his own deceptions. We can’t ever quite muster the energy to feel bad for the Childs — certainly not as they claim persecution between siestas by their in-ground pool — but we can feel a perverse sympathy for a pair of goofballs so hopelessly blinded by their own self-mythologizing that they’ve lost any and all perspective on the reality around them.

Honk for Jesus. Save Your Soul is in theaters and streaming on Peacock now.
Posted by Patrick Bromley at 5:00 AM