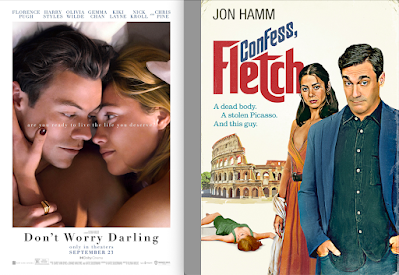 Buncha hotties in these movies, folks.

Jon Hamm fans (Famms, I insist we be called) have waited years for the actor to score a role like Irwin M. Fletcher, the charming — and often bumbling — investigative journalist created by author Gregory Mcdonald and first brought to the screen in the 1980s by Chevy Chase. While the actor spent seven seasons exploring the tortured chaos of American masculinity on Mad Men, we die-hard Famms (It’s not great, but what’s your suggestion?) also watched him sharpen his comedic chops on sitcoms like 30 Rock and Curb Your Enthusiasm, guest turns that consistently hinted at untapped gifts. He’s funny! And though it’s unlikely to endure as a new comedy classic, Confess, Fletch is a wonderful opportunity for Hamm to finally prove it on a grand stage. Shining, too, is director Greg Motolla, who has worked mostly in television since 2016’s underwhelming Keeping Up with the Joneses. Eschewing the cut-to-shreds improv style of his contemporaries, Motolla crafts an easy-going who-dunnit with wit and charm to spare. 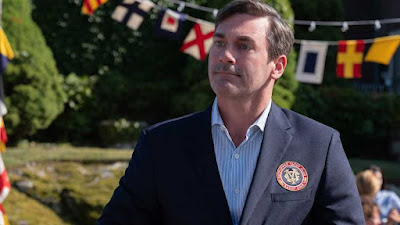 Confess, Fletch begins as a web of murders, art thefts, and kidnappings, but the film lets us off the details hook early on, asking about as little of us as it does its boozy protagonist. We’re just along for the ride with Fletch, who mostly finds himself bouncing between his Italian debutante girlfriend (Lorenza Izzo as Angela), her ostentatious stepmother (Marcia Gay Harden as the Countess), their germophobic art broker (Kyle MacLachlan as Horan), a mismatched pair of police investigators (Roy Wood Jr. and Ayden Mayeri), a clumsy neighbor (Annie Mumolo as Eve), and an irascible newspaper editor (fellow Mad Man John Slattery as Frank). Motolla keeps the tone light and breezy, giving Hamm and his co-stars all the room they need to find their rhythms and kick their respective narrative cans a little bit further down the lane. Given our modern glut of high-stakes blockbusters and mystery box dramas, there’s a refreshing easiness to Confess, Fletch that recalls the comedies of eras (eras) gone by.

Hamm will be a question mark for some, but he slides into one of cult comedy’s more revered roles without a hint of apprehension. He brings all of Chevy Chase’s signature smarm without any of the mugging, with Zev Borow’s screenplay appropriately excising the costume changes featured so heavily in the previous entries. It’s an approach better suited for Hamm, who plays stronger when he’s trying to catch up with the movie as it wizzes past him rather than hijacking it with his own center of gravity. Motolla could have easily leaned into that legendary Don Draper allure, but he and Hamm seem much happier with a Fletch who nurses negronis and schlubs it up under a Lakers cap and ill-fitting yachtwear. We can see this Fletch pulling Lorenza Izzo, of course, but we can also see him blowing the whole thing with half-cocked accusations of murder and grand larceny. It’s a winning combination for Hamm, who could (and should) churn out yearly Fletch sequels to stave off assimilation into the next big Cinematic Universe.

In a sun-bleached desert miles away from civilization, an atomic-age industrial conglomerate called The Victory Project has constructed a cookie-cutter neighborhood of identical ‘50s ranchers. Their owners are slick-haired business types with adoring wives who see them off from the driveway each morning and meet them at the front door — cocktail already in hand — each evening. Alice (Florence Pugh) and Jack (Harry Styles) are the most idyllic of the bunch, a gorgeous pair of twenty-somethings whose stunning smiles and penchant for cunnilingus tie their neighbors in fits of jealousy. Life with Victory is perfect, says its charismatic founder Frank (Chris Pine), because that’s what its residents deserve. They’ve sacrificed. They’ve evolved beyond the limitations of modern society. Why, then, are residents like Margaret (KiKi Layne) suffering bouts of so-called hysteria, seeing phantom airplanes in the sky and demons in their dreams? What are Frank and Victory really up to? Will Alice and Jack escape before it’s too late? 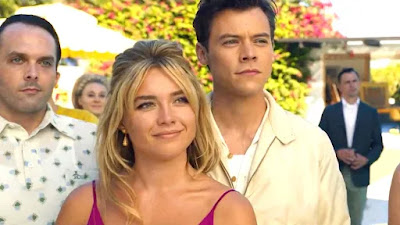 You can probably guess where Don’t Worry Darling is going with this. No, really. You’ll guess it in the first ten minutes or so, as Katie Silberman’s screenplay derives so much from other sci-fi staples that you could spend most of the film’s lifeless third act counting the titles in your head. Lucky for you, though, you happen to be watching a film starring Florence Pugh, who has earned a formidable reputation for carrying lackluster material across the finish line. Don’t Worry Darling is no different: Thinly shaded though her Alice may be, Pugh injects her with all the ferocious integrity we’ve come to expect after stunning turns in Lady Macbeth, Midsommar, and Little Women. Some performers develop over time, building on early promise and eventually finding roles that give them the confidence to come into their own. Pugh, on the other hand, seems to have been born a movie star. She attacks the frame as if challenging it to contain her, giving director Olivia Wilde all the psycho-sexual firepower she could possibly imagine.

Unfortunately, Don’t Worry Darling fails to meet Pugh on her level. After a first hour of charming-if-extremely-conspicuous ‘50s catalog chic, the film grinds to a dramatic halt for twists and revelations that end up muddying both its narrative logic and its anti-patriarchal themes. More disappointing, though, is its lack of innovation, the fruitless gamble it takes with decades-old science fiction concepts presented far better in other media. Still, Olivia Wilde’s sophomore feature proves her to be a capable director who knows how to get the best out of her actors and — with the help of veteran cinematographers like Matthew Libatique — how to craft a dynamic and energetic visual palette. Don’t Worry Darling isn’t a waste of our time, necessarily, but it does carry a bit of unearned confidence for something so predictable. All filmmakers wear their influences on their sleeves, and we shouldn’t penalize Wilde for doing so, but it’s not unreasonable for us to expect those influences to inspire at least one or two new ideas.
Posted by Patrick Bromley at 12:00 PM