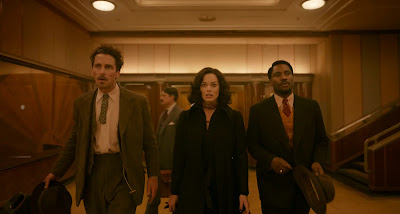 A new film starring Taylor Swift and some other people.

I’ll be honest with you fine folks: I like a movie that is clearly going through it. You know what I mean: Proper Going Through It. The kind of “It” that feels totemic and monumental, the kind of “It” from which no one comes back the same. We’ve all been there: Messy, stubborn, regretful. Trying on ill-fitting identities. Worshiping indifferent gods. Kicking ourselves for keeping faith when the rest of the world is moving on. It’s painful as all hell in real life, but seeing it on screen can be cathartic. David O. Russell has built his career around movies that are Going Through It (I Heart Huckabees, Silver Linings Playbook), movies in which characters are digging themselves out of one pile of shit and into another. And while some of that is undoubtedly the case of a filmmaker who doth protest too much — Russell’s alleged abuses and assorted misconducts are well documented — it’s also the whimsy of human chaos, the maddening truths we face when we’re backed into a corner and left with no other choice but to grow or die. 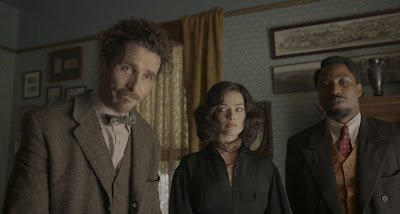 His latest misadventure is Amsterdam, a comedy loosely based on the real-life fascist plot to overthrow the U.S. government in the early 1930s. When best buds Dr. Bert Berendsen (Christian Bale) and Harold Woodman, Esq. (John David Washington) are hired by statuesque socialite Liz Meekins (Taylor Swift) to investigate the mysterious death of her father (Ed Begley Jr. as General Meekins, whom the boys knew from their WWI days), they quickly find themselves accused of murder and targeted by cops, corporate goons, and international intelligence services. Their only hope is Valerie Voze (Margot Robbie), the beautiful nurse who acted as the third point in their Bohemian throuple more than a decade earlier. Valerie abandoned them back in Amsterdam, but now they need her upper-crust connections — specifically her brother, Tom (Rami Malek) and his vapid wife, Libby (Anya Taylor-Joy) — to uncover the truth before influential retired General Gil Dillenbeck (Robert De Niro) is roped into the conspiracy.

That’s not to mention Chris Rock, Mike Myers, Timothy Olyphant, Michael Shannon, Zoe Saldana, Andrea Riseborough, Alessandro Nivola, and the litany of other famous faces here to keep us company while Amsterdam weaves in and out of coherence. Bale’s giving wild-eyed Pacino energy as Berendsen — literally, in this case, as the character’s glass eye tends to go askew — with Washington pinballing off him as yet another measured straight man. Our boys are stretched pretty thin in this fight for American democracy, with Berendsen also struggling to keep his medical practice afloat (he’s in hot water for toying with experimental treatments) and rekindle his dead marriage to Riseborough’s WASPy Beatrice, whose rich parents sent him to war in hopes of getting rid of him. Margot Robbie’s Valerie is a golden age dame of the highest order, but her brassy exuberance is stifled by a cocktail of treatments for her supposed female “hysteria” and the lingering pain of her doomed interracial romance with Woodman. 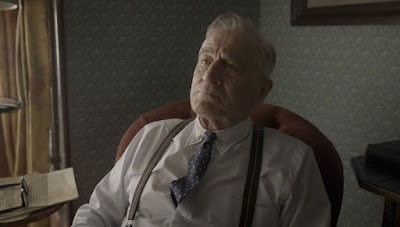 So the cast of Amsterdam is definitely Going Through It, which should thread nicely into a story about shady forces coercing veterans into backing a corporate oligarchy powerful enough to compete with Hitler and Mussolini (or cooperate with them, depending on which direction the financial winds happen to be blowing). Russell — who pens the screenplay — clearly set out to make this an absurdist, Coen-esque romp arguing for empathy and optimism in the face of hate and division. Institutions are cold and corruptive in Amsterdam; they squeeze the humanity out of constituents who would otherwise be reveling in joy de vivre after surviving the unspeakable horrors of war. And there is a certain cinematic wonder in watching our leads sing lighthearted nonsense songs in French and capture hand-cranked footage of their most rapturous moments of freedom. But these stray bits of jubilee can’t fix Amsterdam’s rambling, haphazard construction, which deadens all the would-be drama long before its final revelations. 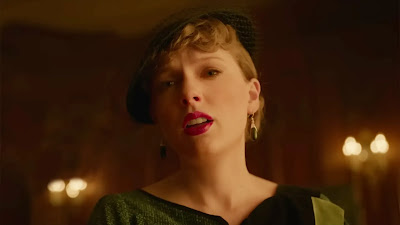 Still, it’s that trademark David O. Russell messiness that also fuels Amsterdam’s strongest sequences, the ones that find our impossibly-charismatic cast doing impossibly-charismatic things. Focusing on those flashes of charm and forgiving the burnt ends will make Amsterdam more palatable, I expect, since Russell’s social commentary never quite bites with the ferocity he seems to intend (comparisons to Adam McKay are a bit rude but not totally unfounded), and his claims to historical accuracy — “A lot of this really happened,” says a wildly-misleading opening title card — won’t stand up to scrutiny. It’s best to appreciate Amsterdam as an opportunity for beautiful and talented movie stars to get dressed up and whip out some dulcet period dialogue in a (relatively) safe, superhero-free environment. Nit-picking the smaller details won’t make David O. Russell a better screenwriter, but it may deter him from making more films that star Taylor Swift, and we need as many of those as we can get.