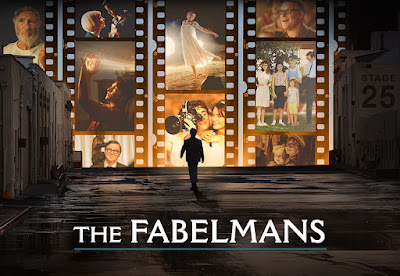 “We’re junkies,” growls Boris Schildkraut (Judd Hirsch), a gregarious bear of a Jewish uncle, as he pins young Sammy Fabelman (Gabriel LaBelle) to a wall in his room. “Art is our drug.” Try as the younger man might to deny it — and sore as his cheeks may be from Boris’ overzealous pinching — Boris is right. Sammy is addicted to the movies. The movies give him focus. They give him control. They give him a voice when his words fail him, balance when the world around him collapses into untenable madness. Like his mother (Michelle Williams as Mitzi), Sammy is an artist. But that art, Boris assures his nephew, will eventually destroy him. It will alienate him from his peers and shatter the fragile domestic equilibrium that Mitzi and Burt (Paul Dano as the Fabelman patriarch) have worked so hard to maintain. Most cataclysmic of all, his art will show him the truth. The truth of his uptight father’s expectations. The truth of the bullies who taunt him at school. The truth of the heartbreaking darkness that haunts his mother’s soul. 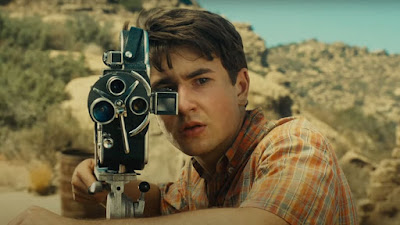 In his half century of filmmaking, Steven Spielberg has never shied away from autobiography, threading themes of familial dysfunction, childhood wonder, and heroic ingenuity throughout nearly every project he delivers. Much to the chagrin of his detractors (including more than a few of his peers), he’s weaponized a signature brand of gauzy sentiment, eagerly romanticizing what other filmmakers often approach with brutal cynicism. His work is a lie, his critics will tell you. Disingenuous treacle. Disposable artifice. The Fabelmans, the most nakedly vulnerable picture of his career, offers a simple retort: “Movies are dreams.” Images are captured on celluloid and run through a projector twenty-four times per second. A lens squeezes them into focus, and a bright light pushes them onto a silver screen a thousand times their original size. Arrange those images in just the right way, and they become rhythmic. Musical. Magical. They become whimsical doses of Technicolor fever. They become dreams.

The Fabelmans is a dream. It’s the Tragedy of the Spielbergs told through the oldest son’s rose-tinted recollections, a not-quite-true story made up of vignettes chronicling his journey from eight-millimeter hobbyist to Hollywood whiz kid. The Beard’s most formative moments are all here: Seeing The Greatest Show on Earth for the very first time. Moving west to California as his father’s engineering genius breeds opportunities with RCA and IBM. Making cowboy pictures with his Eagle Scout troop mates. Dropping out of college to pursue an entry-level position on an honest-to-god studio backlot. But it’s not long into The Fabelmans before we realize that the Spielberg lore is all just window dressing for a family drama that treats these moments less like carefully-crafted bursts of inspiration and more like desperate attempts to dam a raging river of repression and loss. Sammy cannot live in the world unless he’s shooting it; he cannot help but find the drama in the frame. He must center it. Exploit it. Even if it kills him. 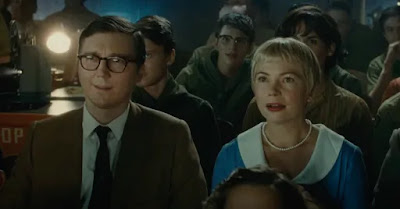 And so, when Burt asks him to cut together a home movie of footage shot during a recent camping trip, Sammy cannot help but realize that his achingly effervescent mother is carrying on an emotional affair with her husband’s best friend, Bennie (Seth Rogen), a man whose ability to translate Burt’s inscrutable techno-babble has been more of a godsend for their marriage than either of them has ever dared to admit. Just as Uncle Boris predicted, Sammy’s artistic eye has landed him in deep water. That same reckless abandon that he used to value so much in his mother — her gifts for dance and piano, her penchant for bringing pet monkeys home unannounced — now reek of attention-seeking selfishness. Why not just tell his father what’s happening? Because Sammy and his mother are just the same: Neither can say what they truly feel. They have to create great works and — as in a devastating scene in which Mitzi watches the footage alone in her son’s closet for the first time — let others come to their own conclusions. 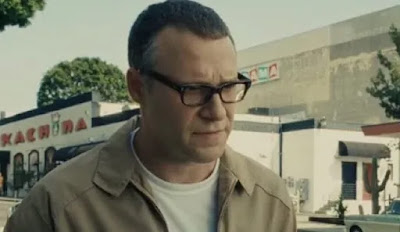 Those eager to reject The Fabelmans as an indulgent, self-serving affair will have a healthy supply of ammunition to work with. It’s full of starchy period dialogue and anchored by performances — especially Williams, who pitches her Mitzi firmly at the back row and never slows down — that feel less like real people and more like, well, Spielbergian ideals. What passes for its plot is languorous, at best, and moments of revelation that others would play with more subtlety — Sammy imagining how he’d shoot the family’s Divorce Conversation while his sisters bawl their eyes out in protest, for example — are painted out in the brightest possible colors imaginable. But that’s the whole point. That’s what Steven Spielberg is reckoning with, here. That’s what The Fabelmans is all about. He cannot help but set a stage. He cannot help but sell the drama. At the expense of realism, credulity, and even — by casting one Hollywood legend to play another and breaking the fourth wall in the final frames — the film’s physical cohesion, he cannot help but nurse his stupefying addiction to movies.
Posted by Patrick Bromley at 12:00 PM