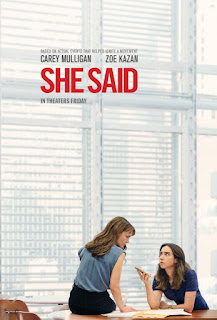 You know what’s great? The Insider.

Like many films based on nonfiction bestsellers, She Said comes to theaters at a bit of a disadvantage. For one thing, the story has been told before — in this case, by Jodi Kantor and Megan Twohey, the New York Times journalists who originally broke the Harvey Weinstein scandal and recounted the journey in their 2019 memoir of the same name. For another, the whole thing feels like it just happened yesterday. It did, actually. We just lived through it and a thousand other sex scandals that brought some of corporate America’s most powerful abusers to justice (and got others elected president). As a result, there’s a too-familiar sting to She Said, a bit of preaching to the choir that feels less like unearthing dormant secrets and more like flicking idly through yesterday’s news feed. This isn’t to say that the story doesn’t deserve wider exposure, of course, as there are always going to be audiences that prefer a two-hour cinematic commitment to a longer literary one, but the prosaic She Said lacks the tension, drama, and character that — not yet having read it — I imagine makes its forebearer such an engaging read. 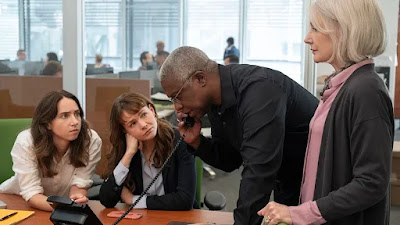 For those who have somehow been able to tune out the last half decade of our collective cultural misery, She Said begins in the wake of Donald “Locker Room Talk” Trump’s 2016 presidential election, after which Twohey (Carey Mulligan) and Kantor (Zoe Kazan) begin investigating reports of Hollywood sexual harassment, eventually setting their sights on the Miramax co-founder and his veritable cavalcade of accusers. The pair scour fading documents and chase down unwilling interviewees, soon providing their editors (notably Patricia Clarkson and Andre Braugher) with evidence of payoffs and cover-ups galore. Although A-list headliners like Gweneth Paltrow, Rose McGowan, and Ashley Judd are understandably hesitant to cooperate with the investigation — McGowan and Judd, especially, since their previous attempts to report Weinstein’s behavior yielded no result and left a black mark on their careers — Twohey and Kantor pull focus on the former Miramax assistants whose abuse went largely unaccounted for.

It’s hard to talk about She Said without comparing it to other true-life investigative thrillers like The Post, The Insider, and Erin Brockovich. Though those films vary in subject matter, each of them takes care to foreground the personal toll exacted by the pursuit of justice, the sacrifices their characters make for the greater good. The Insider — the crowning achievement of the genre, for my money — is especially adept at threading smaller conflicts within the larger narrative and crafting emotional arcs for its protagonists. She Said forgets this, unfortunately, leaving its audience to watch Twohey and Kantor send text messages, eat lunches, and huddle around conference tables until the story reaches its inevitable conclusion. Though attempts are made at humanizing them and the women they interview — cuts to the pair navigating their roles as wives and mothers seem to happen just as the journalism scenes are running out of steam — there is little interpersonal drama to punctuate character or complicate the narrative. 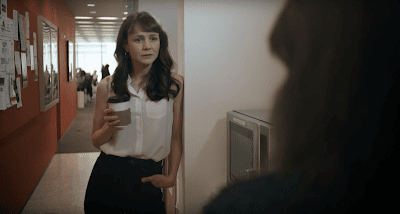 Director Maria Schrader does have her heart in the right place, though, and while Rebecca Lenkiewicz’s screenplay is built almost entirely of clunky dialogue that shouts its subtext from the rooftops, there are visual flourishes that create what passes for tension in She Said’s airless proceedings. One especially good one comes as Twohey and Kantor walk under a construction scaffold flanked by workers in hardhats. They pass by without incident — unlike an early scene of Twohey telling off a belligerent bar patron that seems to have been included so that Mulligan could yell and slam her fists in the trailer — but the sense of unspoken danger during the long take is palpable. She Said would have done well to feature more of those visceral beats, even the flashier ones where victims recount their experiences as the camera crawls through the empty hotel rooms and quiet hallways that witnessed their abuses. Instead, Schrader gets distracted by the Post of it all, favoring newsroom banter that adds up to very little drama at all. 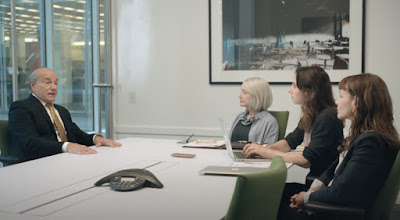 Real ones might remember 2019’s The Assistant, Kitty Green’s patient and introspective drama about a young woman toiling in the service of an abusive Hollywood power player who is clearly modeled on Harvey Weinstein. Though She Said’s narrative intentions are obviously loftier and more complex, there’s an intimacy to that film that is sorely missed here. Green’s is the story of how permission and ignorance become the norm, how underlings necessarily adopt the temperament and sensibilities of their commanders. We start to understand why and how monsters like Weinstein are able to keep their power and why so many are scared to speak out. She Said never finds a way to dramatize that, instead trotting out a series of repentant Miramax conspirators at whom Mulligan and Kazan can wag their fingers in disgust. There’s a difference between depiction and dissection, between introducing a theme and developing it, and She Said needs quite a bit more development to justify its adaptation.
Posted by Patrick Bromley at 5:00 AM