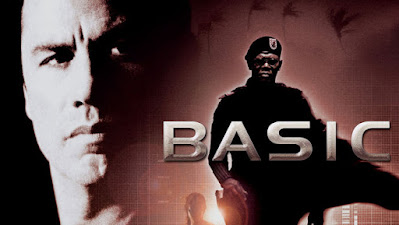 Nominated for “Best Voice Over” at the Golden Trailer Awards.

• Best Scene/Moment: The final scene where the last twist is revealed. It makes a frustrating movie into something much more interesting.

• Best Merch: A “Rare Basic 2003 Movie Promo T-Shirt” for $38.00. What better way to show your friends that you support the movie Basic than with a shirt that’s pretty basic! 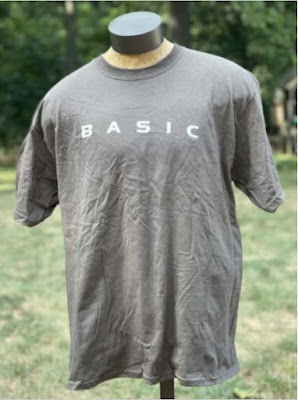 • Director Check: Basic was directed by the great action filmmaker John McTiernan. His debut feature was 1986’s Nomads, a horror movie starring Pierce Brosnan. Shortly thereafter, McTiernan went on an enchanted run of action movie classics directing Predator, Die Hard, and The Hunt for Red October all in a row. Other credits of his include Medicine Man, Last Action Hero, Die Hard with a Vengeance, The Thomas Crown Affair, The 13th Warrior, and the 2002 remake of Rollerball. Basic is (to date) John McTiernan’s final directing credit. During the 2000s and 2010s, he got into legal trouble, went to prison, and filed for bankruptcy. According to IMDb, McTiernan will be making a comeback with Tau Ceti Four, an upcoming sci-fi action movie starring Travis Fimmel and Uma Thurman.

• Year 2003 Movies to Trailer Before It: Confidence, Identity, Matchstick Men 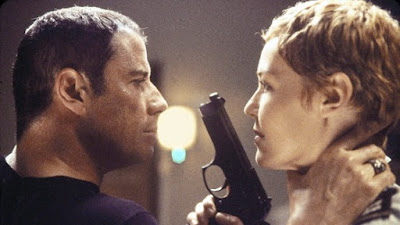 • Mall Movie? It’s borderline, but I’ll say no because of the stars and director involved. It would eventually play at the mall deeper in its run, but it wouldn’t start there.

• Only in 2003: People thinking that Giovanni Ribisi was a next-level character actor.

• I Don’t Miss: Roselyn Sanchez supporting performances. Not to be mean, she just was never a favorite of mine. 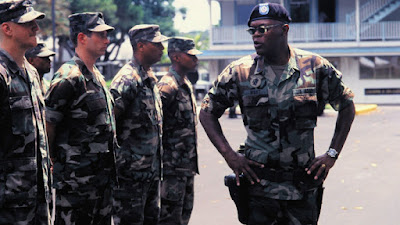 • What I Thought in 2003: I remember being excited about the film on paper because it’s a John McTiernan vehicle that reunited Pulp Fiction’s John Travolta and Samuel L. Jackson and then being frustrated because Basic is a twist movie designed to mislead and frustrate the audience. Between Basic and Identity, I had no patience for that shit in 2003.

• What I Think in 2023: I have patience for it now! I think the first act of Basic is intriguing enough and the movie ends really well, which forgives a lot of the Rashomon POV story structure in the middle that’s meant to deceive you. It’s by design so I forgive all the frustration in the end because it feels worth it by the end credits. I liked Basic more on this rewatch than I did 20 years ago and a lot of that has to do with how great John Travolta (playing a character named Tom Hardy!) and Connie Nielsen are in the lead roles (they’re quirky and have good chemistry) and the ample amount of entertaining supporting performances from actors like Samuel L. Jackson, Brian Van Holt, Taye Diggs, and Harry Connick Jr. It’s not a great movie, but Basic is a fun thriller.
Posted by Patrick Bromley at 5:00 AM