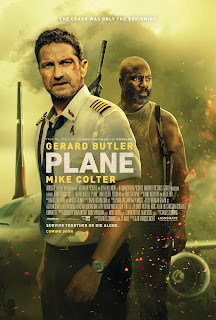 Happy New Year, everyone. It’s officially awards season, the time when Hollywood’s oldest and whitest get together to decide which art deserves praise and which studio wasted millions of dollars trying to convince voters that The Whale isn’t a piece of shit. But we’re not going to talk about any of that today. You know what we’re going to do today? We’re going to celebrate Plane, an action programmer made with just enough love and care to justify top-tier placement in a Redbox Near You, a movie so gleefully unpretentious that it puts the pomp and circumstance of the Golden Globes (which I skipped to attend the Plane screening) to shame. Movies don’t always have to speak on the issues, you know. They don’t always have to challenge intellect, social consciousness, or bladder control. Sometimes — especially during the January doldrums — a movie can just be about a burly Scottsman who flies a plane that goes “whooooosh” through the sky. In fact, I have a pitch for the Daniels: Every Plane, Everywhere, All at Once. 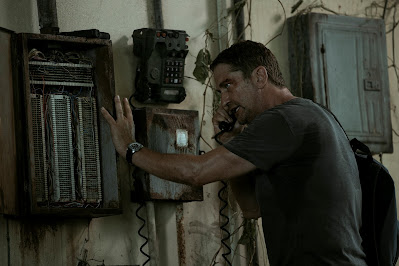 Gerard Butler — riding the line between A-list action lead and DTV legend like no one in modern history — stars as Captain Brodie Torrence, a commercial airline pilot who’s just one more overnight flight away from celebrating the New Year's holiday with his daughter (Heather Seiffert) in Hawaii. Torrence is brow-beaten but charming, the perfect role model for young First Officer Dele (Yoson An), who’s got a family of his own waiting for him in Hong Kong. Their flight over Southeast Asia is mostly empty — either for plot considerations or COVID production concerns — which makes it ideal transportation for Louis Gaspare (Luke Cage’s Mike Colter), a re-captured convict who escaped a homicide sentence years ago. Gaspare ends up being the least of Torrence’s worries, though, as a lightning strike soon grounds the plane on a remote, unpoliced island in the Philippines. With a brutal militia (led by Evan Dane Taylor) closing in, Torrence and Gaspare must join forces to get the passengers and crew home alive.

Director Jean-Francois Richet (2005’s Assault on Precinct 13) is no action innovator, but his modest ambitions befit Plane’s Lionsgate-y charm. The initial plane crash — sorry, forced landing; that’s important for later — is diligently staged and feels realistic enough that we never cross over into total science fiction territory. The other passengers and crew are colorful without ever becoming loud caricatures; standouts include a whiny businessman (Joey Slotnick) and a hard-nosed flight attendant (Jurassic World’s Daniella Pineda as Bonnie, who, with all due respect, has real Rob Energy). Back at mission control, airline (and awesome face) owner Paul Ben-Victor manages the crisis, calling in corporate fixer Scarsdale (television’s Tony Goldwyn) and his team of private security forces to recover the assets before the press catches wind of the disaster. It all blends in a nice potpourri of action tropes with just enough humanity to maintain stakes and just enough balls to let Mike Colter beat people to death with a sledgehammer. 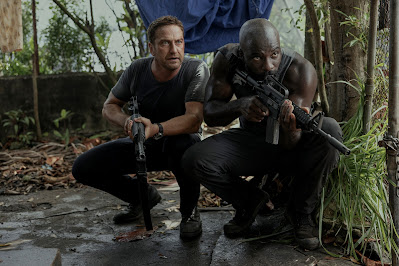 A better movie might have given the charismatic Colter’s Gaspare more to do, though, perhaps expanding a middle act that finds him — free of his restraints — and Torrence navigating a hostile jungle environment with only a tenuous trust to bond them. The pair have a solid chemistry, and convict-turned-soldier Gaspare is morally ambiguous enough that we might have mined more drama out of later scenes that force him to choose between the passengers’ safety and his own self-interest. The entrance of Shellback (Remi Adeleke) and his mercenary squad undercuts all that, unfortunately, making our heroes’ safety more a question of “when” than “if” and neutering Gaspare’s influence into redundancy. Butler gives Torrence an everyman quality that sets him apart from some of his more famous roles — he’s often a special agent, scientist, or, you know, Spartan king — but Torrence lacks a strong character arc that would make his interplay with Gaspare more exciting. He’s a good guy who does good things…good. 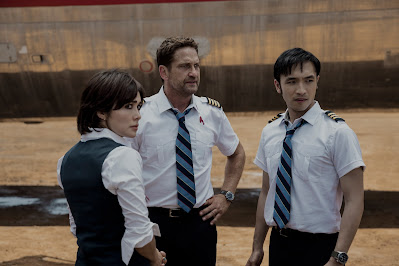 Still, Plane delivers where it counts, especially in the final runway escape sequence that finds Shellback and his comrades decapitating insurgent militants and blowing through them (and their trucks) with fifty-caliber rounds. We get the sense that Richet and his team might have pushed things a little further in that regard had Butler — who seems egoless and happy to cater to his audience — not been onboard as a star and producer (Colter and his aforementioned sledgehammer make a strong argument there). But we’re here to defend mid-level Lionsgate thrillers like these, after all, and there’s nothing to say that Butler’s presence doesn’t provide a bit of balance and gravitas that the lesser-known crop of DTV stars would lack. So why make it more complicated than it has to be? January is the perfect time of year for a slice of last night’s pizza like Plane, something satisfying, if uninspired, that will hold us over until the studios finish counting James Cameron’s money long enough to get that TÁR spin-off up and running.

Plane comes to theaters on January 13th.
Posted by Patrick Bromley at 12:00 PM