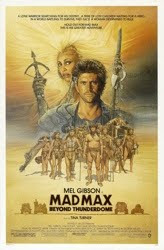 1. The Godfather Part III (1990) - Not as bad as some say, but not as good as its defenders would have you believe, either. Joe Mantegna and Andy Garcia and the helicopter ambush are all awesome, but this movie needed Robert Duvall (which is not something that can be said too often). For the last time, Sofia Coppola is not the problem here.

2. Spider-Man 3 (2007) - This could just as easily be any third entry in a comic book series (see also: X-Men: The Last Stand, Batman Forever, Blade Trinity), as it makes the mistake of heaping in more and more characters and story lines that studios decide fans want to see. There's never a question of whether or not we want to see them done well. There are still things to like about Spider-Man 3, but it's a looong way down after part 2 and easily the least rewatchable of the trilogy.

4. Mad Max Beyond Thunderdome (1985) - One of the strangest movies to ever receive a wide release from a major studio. Take away a lot of the stuff with the kids and this is a pretty sweet movie. It's too bad that it gave every douchebag in America license to make "two men enter, one man leaves" jokes.

5. M:I III (2006) - As much as I love Brian DePalma, that first Mission: Impossible movie was a total mess with some well-staged set pieces. J.J. Abrams' entry into the series (his first as a feature director) is the best, with kick-ass action stuff, actual stakes, a good villain and a focus on the team dynamic. There's a lot of stuff in here that actually subverts the usual action movie tropes. Ignore the Kanye West theme song.

6. Beverly Hills Cop III (1994) - I don't care that this is a shitty Eddie Murphy movie. You can't throw a rock in Blockbuster without hitting one of those. I don't even care that it's a shitty Beverly Hills Cop movie, because it's kind of overrated as a series anyway (yes, even the first one). What breaks my heart about this is that it's the worst, most boring movie John Landis has ever made. F this movie.

7. Spy Kids 3-D: Game Over (2003) - The first and clearest indication that Robert Rodriguez must be stopped from shooting movies in his backyard -- or, at least, should stop releasing those movies into theaters. While way ahead of the 3-D trend (and honoring a long tradition of "part 3s" being in 3-D, like Jaws 3-D and Friday the 13th Part 3 and Amityville 3-D), it's a terrible, ugly movie. I don't know if any of the actors spent a single day on the set together, and it shows. It's especially disappointing because Spy Kids 2: Island of Lost Dreams is actually kind of awesome.

9. Day of the Dead (1985) - Another movie that suffers in comparison to its predecessor but is considerably better than its reputation would suggest. Rumor is that what Romero made was vastly different than what he had planned, since his budget was slashed after he insisted on releasing the movie without a rating. It's actually dated pretty well, and the gore effects remain some of the best of all time.