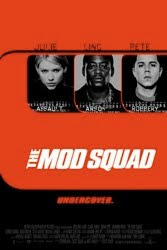 The A-Team is now in theaters, making it a perfect time to go back and F some movies based on TV shows. These range from pretty great to not bad to I hate my life. Bring on the Moonlighting movie, please.

1. The Fugitive (1993) - Along with Brian DePalma's The Untouchables, this is widely considered the best TV show movie ever made. Some cool set pieces, lots of great Chicago locations, but kind of overrated. Tommy Lee Jones won an Oscar for doing the best Tommy Lee Jones impression. Like in a lot of his later work, Harrison Ford may or may not be constipated.

2. The Addams Family (1991) - The first of director Barry Sonnenfeld's three TV show movies, The Addams Family is a very well-made movie that's not very good. Raul Julia, Angelica Houston and a very young Christina Ricci are all awesome and so is the production design, but the script (involving an Uncle Fester imposter) is super lame. The 1993 sequel, Addams Family Values, is way better.

4. The Avengers (1998) - Uma Thurman in a catsuit. Ralph Fiennes is British. There are guys in giant colorful teddy bear costumes being commanded by master villain Sean Connery, who wants to control the weather. Somehow, it all sucks bad.

5. The Mod Squad (1999) - Here's a TV show movie better than its reputation would suggest. It tries a little too hard to be hip and cool, but actually achieves it to some extent. Way more watchable than many of the movies on this list.

6. Miami Vice (2006) - Michael Mann's incredibly underrated take on his own super-'80s cop show deserves to be mentioned in the same sentence as The Fugitive and The Untouchables. Colin Farrell's cocaine-infused performance aside, it never insults your intelligence.

7. Lost in Space (1998) - A good cast and tons of legitimate remake potential are squandered by a terrible story, the girl from Party of Five and the most terrible fucking CGI creation ever committed to film, a mentally handicapped alien monkey/shameless toy tie-in named Blarp. Fucking Blarp.

Anyone who says Jar-Jar Binks is the worst thing to every happen to sci-fi is a whining pussy who doesn't know Blarp. (In the future, when someone is complaining about a movie being terrible and you don't totally agree, feel free to say "You Don't Know Blarp." Let's make this shit catch on, countrymen.)

8. Starsky and Hutch (2004) - Todd Phillps pissed away most of his Old School with this unfunny and strangely lazy adapation of '70s cop show Starsky and Hutch, which tries to pay loving tribute to the show (courtesy of the most uncomfortable "celebrity" cameos ever) while at the same time making fun of it. Plus, Ben Stiller tends to ruin things.

9. Wild Wild West (1999) - Now now now once upon a time in the west, mad man lost his damn mind in the west. Fuck you, Will Smith. Fuck you, Barry Sonnenfeld. Fuck you, giant Branaghspider.

10. The Dukes of Hazzard (2005) - All that can be said about this piece of shit is that Jessica Simpson is the best thing in it.
Posted by Patrick Bromley at 2:08 PM