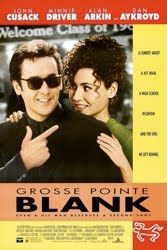 The Jason Statham remake of The Mechanic comes out this week, and I'm sure it will be to die for. Just kidding. It will be a hit. Number one with a bullet. What I mean is that I'm sure it will murder our eyes. Let's F past hitman movies.

2. Wanted (2008) - If you were to combine The Matrix with Fight Club and a craaaazy Russian, this is the movie you might get. How much you enjoy Wanted is entirely dependent on just how stupid you want your movies to be. And how much of boring Angelina Jolie's gross, bony, boring ass you'd like to see. Very much!

3. Panic (2000) - A fantastic, barely-released hitman comedy-drama from Henry Bromell, who hadn't made a film before this and hasn't had a theatrical film since. Underseen and underrated. William H. Macy is duh great and the movie has some very dark things to say about fathers and sons. Plus, Neve Campbell makes out with a girl if you're into that sort of thing. Very much!

4. Grosse Pointe Blank (1997) - It's hard to make a movie that's genuinely cool without being self-conscious, but that's what John Cusack and his friends were able to do with this pitch-black comedy. It gives Cusack one of his best roles ever: ascerbic, cynical, dark and homicidal. Much of it feels dated now, but I love it a lot. I don't want to get into a semantic argument about it, I just want the protein.

5. Assassins (1995) - You might think that on a list of good hitman movies, a movie called Assassins might be looked at favorably. You might be wrong. You ARE wrong (this is also true of Hitman). Sylvester Stallone is boring, the script by the pre-Matrix Wachowski siblings is nonsense and Amber Waves keeps her pants on the whole time.

6. The Killer (1989) - It's impossible to picture the '90s movie landscape without John Woo's cult classic. There's a lot of what we like about John Woo on display, too, but it's been 20 years and maybe now we can admit that the movie is a tad too operatic (because John Woo) and a little overrated. We're still nerd friends, right?

7. The Professional (1994) - One of the best hitman movies since Le Samourai; it's not coincidence that both are FRENCH (add La Femme Nikita to the list and they've got the market cornered). I'll get lots of shit for saying this, but the weakest part of the movie is still Gary Oldman. In a movie that's very European in its tone and attitude, his character and performance is VERY LOUD AND AMERICAN. Not bad, just out of touch with what's around him. And a little bad. Wee Natalie Portman is great, and it might be the first/last time Jean Reno was interesting.

10. Ghost Dog: The Way of the Samurai (1999) - Ignoring the fact that this movie has one of the worst/best/worst titles this side of Ballistic: Ecks vs. Sever, Jim Jarmusch's hip-hop/gangster/samurai mash-up is actually very awesome. There is nothing about these elements that should work together. There's nothing about Forrest Whitaker that should work, either, and yet most of him does.
Posted by Patrick Bromley at 6:29 AM