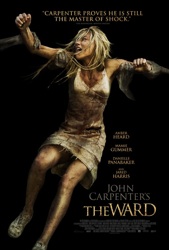 It’s been a long time since I’ve seen a new John Carpenter movie in a theater. When I found out The Ward would be released in a theater a mere 15 minutes from my house, I was very happy. I stayed away from reading any reviews, but it wasn’t lost on me that it wasn’t doing well amongst critics or even fans. I didn’t care. I love John Carpenter, and although he hasn’t made a good movie in a long time, I was trying to convince myself that The Ward would mark his return to greatness, or, at the very least, goodness. I was kidding myself.

The Ward opens with Kristen (Amber Heard) entering the psych ward of a hospital after being arrested for burning down a farm house. Why did she burn it down? We find out later, and boy was it worth it! (It wasn’t). She meets a male and female nurse, both stereotypically ornery, Doctor Stringer (Mad Men’s Jared Harris) and four female mental patients she’ll be spending her time with. Kristen spends the entire movie moping around, asking thousands of questions, and occasionally throwing in an “I’m gonna get out of here.” Doctor Stringer tries “curing” her, the nurses snarl at her at every ten minutes, and her ward-mates spend the entire movie repeating things they’ve already said over and over -- and not in a "she’s-crazy-so-she-repeats-things" way, but in a "wow-this-is-a-shitty-script" kind of way. Kristen attempts to escape several times, unsuccessfully, and it ends with a horrible, lazy “twist”.

I have nothing against Amber Heard. She’s always been fine in the movies I’ve seen her in, but holy shit she is bad in this. She found a one-note performance and rode it out through the entirety of the movie. Everyone, in fact, seems to be completely one-dimensional. Each patient serves a different, predictable purpose; each more boring then the last. Only Emily (played by Mamie Gummar) is remotely interesting, and that’s debatable. Everyone else is completely forgettable (except the character Zoey, but she’s memorable for all the wrong reasons). And it amazed me that we’re supposed to believe that Kristen cares about the women she’s imprisoned with. There is zero chemistry between Amber Heard and her co-stars, so every time Kristen announces that she wants to save this person or help that person, it’s feel completely false. Everything about her feels false.

I’m not going to spend much time discussing the “twist” at the end. One, because in case you do see the movie I don’t want to ruin it for you. Two, because it’s not worth writing about any more then I just did. It’s that stupid.

Early on in the movie, I thought we were getting a unique ghost story. Here’s a ghost that terrorizes mental patients. That’s great because who the hell would believe a mental patient when they try convincing the world that they’re being stalked by a ghost? Unfortunately, however, this was not the movie I saw. The Ward had no interest in giving us anything new, instead providing us with mostly failed attempts at jump scares, and…no, that’s about it. Jump scares. And I can’t think of a horror movie with less tension. When people go missing, there’s no weight to it.  We’re asked to care, but the truth is we don’t. Nothing about the characters demands the audience feel anything when they’re missing. Or even when they’re not missing.

By the way, Kristen spends the last third of the movie making the worst escape attempts in cinema history. She’s awful at it. With every escape attempt, the question wasn’t will she make it out, but in what anti-climactic way will she get caught this time.

The ghost itself is completely forgettable. It isn’t until at least half way through the movie that we get to see it and when we finally do, well, it’s uneventful to say the least.

One of my favorite things about Carpenter’s movies, especially his horror films, are how atmospheric they are. The Fog alone is a movie that works almost entirely on atmosphere. Carpenter has always been a director that knows where to place a camera and how to light a scene. Strong visuals are his staple. The Ward disappoints in this way as well. The visuals feel so flat, so two-dimensional that it’s shocking. Carpenter makes no attempt to create an atmosphere; when a hospital is used as a location, you can usually expect a cold feeling, maybe dark where there’s usually light, something to make you feel uncomfortable for the characters there. Instead, it felt like it was shot in an elementary school. Well-lit and non-threatening.

Nothing about The Ward feels like a John Carpenter movie. It’s a film with no bite, no atmosphere, and not an ounce of effort on the director’s part.
Posted by Patrick Bromley at 1:28 PM