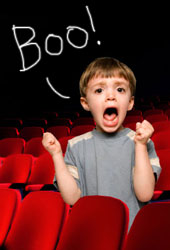 It's only Oct. 21, and we already have over 250 comments in the F This Movie! F Scary Movies! Challenge II. That's impressive! Good job, some of you! The rest of you? Step up your game! But #ScaryMovieMonth isn't over yet -- you still have over a week (and, really, the week before Halloween is where the rubber meets the road [huh?]) to submit your seven-word reviews to our website. It's the most fun you can have with your clothes on! Or off! You weirdos!

The monster talks! Arguably the best horror movie ever made, here is the original trailer for Bride of Frankenstein. Pretty straightforward, it sets the tone for future generations of horror previews with its teasing commentary. The opening onscreen text lures you in ("If you have a weak heart, better leave now!"), while the questions it raises ("What will she look like?") surely made audiences in 1935 salivate for answers. The trailer has very little dialogue, and is mostly dark shadows, ominous orchestral score and spooky sound effects. I'm blown away that something made over 75 years ago can still stir the soul. This trailer works! I mean, I want to see the movie again right now! But I can't! Because I have two more trailers to write about! Arrrgh, F This Movie!

A mere half century after the release of Bride of Frankenstein, the human race takes a giant step backwards, right into a fetid bucket of green Nilbog milk. Something so bad never felt so right, and Troll 2 is most definitely both. The subject of the documentary, Best Worst Movie, this movie delivers on all levels. Well, all levels except the "good on purpose" level (but that's a hidden level, and you don't even need to find it in order to rescue the princess. WHAT?). I admit that I came late to the party on this one, and Patrick (as well as some friends from high school [*cough* Jen and Kim *cough*]) can school me on the history of the "film," quotes, trivia, etc. What I bring to the table are fresh eyes and keen observations, such as ... man, the acting in this thing is TERRIBLE. And ... I'm out. But everyone should see this! If only so you can say that you've seen Troll 2. A truly shitty movie. That's also great! Weird, huh?

This one's for Mike. You can hear him tell the whole story of how he and his friends rented this ultimately disappointing movie on our Sleepaway Camp commentary, but I'll try to summarize it for you for the purposes of this write-up. So, Mike and his friends rented this movie, and were ultimately disappointed. Good? No? You want more? Ugh, FINE. OK, uh ... so, they were looking for a cheesy, so-bad-it's-good horror movie to watch one night, and they stumbled across this "gem" in the video store racks. I have to assume it was Blockbuster, but it might have been Video Update. There's really just now way to know! Except to ask Mike! And he's not here right now, so you'll just have to deal with me! ANYWAY ... based on the cover art, the movie looked like tons of fun (also my nickname in junior high). So they rented it, and I guess ... it sucked? Well, I've gathered that it's not so much a giant piece of poo as it is boring and slow and not scary and, yes, disappointing (ultimately). Although it's probably a giant piece of poo, too. So yeah. Spoiler alert: the one and only MDK (that's Murder Death Kill, for those of you unfamiliar with Demolition Man) is when Pinocchio sneaks into a hospital, approaches a sleeping sick person in a hospital bed and unplugs their life support. That's it! That's how Pinocchio gets his(?) revenge! Look, I don't really have anything all that great to add to Mike's story (which is PERFECT), other than to make this general comment about suspending disbelief when it comes to really creepy inanimate objects: HEY! Directors and set decorators of horror movies! Yes, you! Look, I know that you want to use a puppet or a doll or a clown that looks really creepy. You're involved in a horror movie, after all. Creepy is your currency! But here's the thing -- you don't need to use a creepy puppet or doll or clown because PUPPETS and DOLLS and CLOWNS are already creepy! Further, when you introduce these creepy-looking PDC (that's shorthand for puppets, dolls and clowns, kinda like MDK is shorthand for ... you get it), the child whom the PDC belongs to CANNOT find said PDC adorable. Because it's not! It's creepy (duh)! I'm looking at you, Poltergeist, Child's Play and, yes, Pinocchio's Revenge! I mean, who would keep THIS in their house? You just know it's going to try and kill you in the middle of the night! So, Pinocchio's Revenge, don't pretend that the little girl LOVES her new creepy-as-FUCK marionette, because NO. Finally, Ron Canada? What are you doing in this thing?
Posted by Patrick Bromley at 6:46 AM