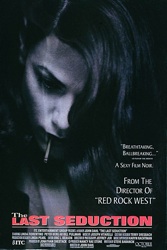 This one pretty much speaks for itself, right?

1. Chris Klein, Election (1999) - Chris Klein is pretty much the worst, and if you don't believe me, talk to my friend Nash. That means his incredible performance in Alexander Payne's Election must just be a case of good casting versus good acting. As Paul Metzler, the school jock running in a student election opposite Reese Witherspoon's Tracy Flick, Klein is sweet and stupid and completely sincere in every single thing he says. He does a great job in a great movie, and those two things would never happen for Chris Klein again.

2. Lorraine Bracco, Goodfellas (1990) - Another case of good casting versus good acting, I think (see also: January Jones on Mad Men). I know a lot of people think Lorraine Bracco is actually a good actress, because she was on The Sopranos, but I think David Chase was just being smart and capitalizing on our residual affection for her from GoodFellas. If you're still not convinced, consider these two words: Medicine Man.

3. Jason Mewes, Clerks (1994) - Maybe not the fairest example, since Mewes was just an amateur doing his friend a favor when he starred in Kevin Smith's Clerks. But whether because he didn't yet know what he was doing or because he was drunk a lot of the time, his first performance as drug-dealing Jay is funny and authentic, like Smith just cast a real drug dealer instead of an actor. Every subsequent performance of Jay would grow more and more cartoonish (and more influenced by sweet Lady H, apparently), but, then, so would Smith's movies.

4. Blake Lively, The Town (2010) - Blake Lively is very pretty and stars on the CW's Gossip Girl, so the bar is set pretty low for her as an actress. That made her performance as a Ben Affleck's townie ex-girlfriend in The Town that much more surprising, suggesting that there was more to Lively as an actress than any of us expected. And, to prove us wrong, she acted once again in Green Lantern.

5. Keanu Reeves, River's Edge (1988) - I'm not a hater of Keanu Reeves, even though I know he's widely considered the worst actor working today. I in no way saw his band, Dogstar, play in the '90s. Twice. And I actually think he's good in a small handful of movies: Speed, Point Break, the Bill and Ted movies, Point Break, The Matrix, Permanent Record and Point Break. His performance as one of the disaffected teens reacting to the death of a friend in River's Edge stands out as one of his best, probably because the "blank" quality he brings to so many of his movies registers as "emotional alienation" instead of "the limits of his range."

6. Jennifer Lopez, Out of Sight (1998) - Jenny from the Block is one of those "talents" with numerous artistic endeavors but who excels at none of them: she acts, she sings, she judges talent competitions, she gets married, but does none of those things very well. So it was a big surprise when she was pretty awesome as federal agent Karen Sisco in Steven Soderbergh's Out of Sight. She was tough but vulnerable, sexy without being obnoxiously so and had great chemistry with co-star George Clooney. It's not just J. Lo's only good performance; it's the only good movie she's ever been in. Just kidding, Monster-In-Law! Let's never fight again.

7. Chris Rock, New Jack City (1991) - Despite being one of the best stand-up comics on the planet, Chris Rock is almost always terrible in terrible movies. In his first major supporting role as the unfortunately-named "Pookie" in New Jack City, however, Rock at least feels authentic. He's basically playing a version of himself at the time, only way more addicted to drugs and willing to wear wires and stuff. Actually, that's not fair. I don't know how willing to wear wires the real Chris Rock was in the early '90s. My point is this: give Chris Rock some turkey. And some crack.

8. Linda Fiorentino, The Last Seduction (1994) - Sometimes it seems like it only takes one perfect role for an actor to finally break through and show what he or she can do. Though Linda Fiorentino had been acting and helping out high school wrestlers since the '80s, it wasn't until her killer performance as the femme fatale in John Dahl's The Last Seduction that everyone really sat up and took notice. She continued to get a few high-profile gigs, most notably as yet another femme fatale in William Friedkin's much more expensive and much more horrible Jade, but all her other movies just served to suggest that she was very limited as an actress. The Last Seduction was a fluke.

9. Corey Feldman, Stand By Me (1986) - Seeing as he would quickly become a punchline as one half of The Coreys (RIP), it's amazing to think that Corey Feldman once showed promise as an actor. As the weird, angry Teddy Duchamp in Stand By Me, the future Frog brother is very effective, showing dramatic chops (his father stormed the beach at Normandy!) and comic timing that wasn't smug and self-conscious. It's too bad he would quickly become an insufferable tool, and then a Michael Jackson impersonator, and then a scary troll singing funk rock.

10. Patricia Arquette, True Romance (1993) - Patricia Arquette is so good as Alabama in True Romance that it pains me to realize she's not very good in much else. She's sexy and funny and tough and badass and sweet and silly and ditzy, but she manages to be all of these things at the same time, not just as the screenplay dictates. She's really just playing some fantasy version of writer Quentin Tarantino's ideal woman, but infuses that admittedly icky prospect with real humanity. She's the girl that all of us comic book reading, movie-obsessed geeks would love to be with, assuming we're willing to kill her pimp and steal a suitcase of cocaine.
Posted by Patrick Bromley at 9:31 AM