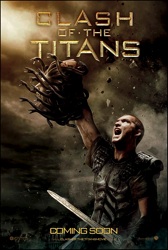 Just in time for the sequel to hit, I rewatched Louis Leterrier's 2010 remake of Clash of the Titans, hoping to find something there I missed two years ago. It. Was. A. Drag.

I grew up as a fan of the original Clash of the Titans from 1981, mostly because I was a nerdy kid into Greek mythology and liked all the special effects and fantasy aspects. Even with my fond memories of that version, I wasn't outright opposed to the idea of a remake when it was first announced; there was a lot that could be updated, from the effects (there are those of us who will always prefer Ray Harryhausen's stuff to contemporary CGI, but we are a minority best found at monster conventions and on movie blogs) to the sluggish storytelling. I dig Clash of the Titans, but it is FAR from perfect and hardly sacred. Besides, it would be hypocritical to get mad at the filmmakers for telling this story again when the original was based in ANCIENT MYTHS that have been told for CENTURIES.

But instead of just using the basic concept of the original movie -- Perseus is tasked by Zeus to go on a quest and rescue Andromeda, fighting all sorts of magical monsters along the way -- and taking it in new directions, the remake of Clash of the Titans, starring my best friend Sam Worthington, unfortunately stays pretty close to the first movie, right down to the fact that it's a lot of dead space that perks up for a couple of big setpieces: the giant scorpion battle, the treacherous journey into Medusa's lair, the giant Kraken at the climax. For the movie to work, it should have taken the approach of Zack Snyder's Dawn of the Dead redo -- just keep the main signifiers of the property (zombies and a mall) and make something totally different. Leterrier's Clash of the Titans should have been a new action movie that happened to be set in the world of Greek Mythology. Instead, it's a lot like the first movie, minus the goofy sincerity but replacing that with a big-budget CGI polish.

So what went wrong? Back when he was still writing for CHUD, Devin Faraci published this extensive look at just how Clash of the Titans got fucked with over and over again, almost entirely after shooting had wrapped. Two-thirds of the material with the Gods was cut. The relationship between Perseus and Io was changed (and, as a result, so was the one between Perseus and Andromeda that put the entire plot into action). A different ending was shot. Based just on the changes that Faraci describes, I'm not sure there was a significantly better movie in the original version of Clash of the Titans, but there had to be one which was much more interesting. Any chance of a personality has been scrubbed away so that the movie can appeal to every possible demographic (even the terrible love story between Perseus and Io is in there presumably to keep the ladies satiated, because you know girls -- never happy unless PEOPLE ARE KISSING OR THINKING ABOUT KISSING). The result feels boring and safe, and no movie with monsters and swords and angry gods that's directed by the guy who made Transporter 2 should feel SAFE. Hollywood needs to stop bringing these crazy action directors to America just to make them into generic copies of everyone else.

In the same way that the movie Fierce Creatures brought the cast of A Fish Called Wanda back together, Clash of the Titans is kind of like a reunion for the stars of Schindler's List. Liam Neeson plays Zeus and Ralph Fiennes plays Hades. That girl in the red coat grew up to play Andromeda. I'm pretty sure that's Ben Kingsley playing Perseus. He's angry at the gods, because they keep fucking with the people to prove that they're still the ones calling the shots and should be treated as such, so he goes a quest to...um...prevent the sacrifice of Andromeda to the Kraken, a giant sea monster...and, in doing so...um...piss off the gods? I'm not totally sure.

At the time it was released, Clash suffered from two different backlashes, both stemming from the point of origin: Avatar. This was the first big special effects epic released post-Avatar (keep in mind, Clash came out in March of 2010; we are talking about a matter of THREE MONTHS), and it, too, just happened to star my best friend Sam Worthington in the lead. If audiences weren't convinced of his ability to carry a movie after Avatar, having him jammed down their throats as the lead of another one a mere 12 weeks later certainly wasn't going to do it. A Sam Worthington backlash quickly set in (and I know, because I was the guy in front carrying the pitchfork) from which he still hasn't really recovered. He had to go all the way out on a ledge to escape it.

It was strange, when the movie came out, that so many critics and internet fanboys really took issue with my best friend Sam Worthington's haircut. Yes, he's the only ancient Greek warrior in the movie sporting a buzzcut. Yes, it looks out of place. It is not what's wrong with the movie. Neither is the performance of my best friend Sam Worthington, even though I would agree that it's nothing special. He has no character to play. He's angry, yes, and maybe hotheaded? But it's not as though that gets him into (or out of) any real trouble. It does not bode well for the remake that Harry Hamlin's Perseus in the original '81 movie has a better and more believable character arc, even if it is the standard hero's journey. At least it's something. This Perseus learns little and changes even less, and somehow my best friend Sam Worthington gets blamed for being bland.

But the real nail in the coffin of Clash of the Titans (and, again, the movie made HALF A BILLION DOLLARS worldwide, so when I refer to it as a kind of "corpse," it's only because even though everyone saw it, no one liked it) back when it came out was that it was the victim of Warner Bros. ill-conceived to cash in on the 3-D wave just after Avatar got it going a few months prior. Even at the time, this was perceived as an incredibly cynical cash-in, and Warner Bros. had to really scramble to post-convert the movie into what wound up, by all accounts, the blurriest, most distractingly terrible 3D we've had since this stupid phenomenon started up again. I didn't see the movie in 3D, because I try to avoid it whenever possible, but there was not one positive thing said about at the time. Making matters worse is that a LOT of people saw it in this format, undoubtedly chasing the Avatar dragon, meaning Warner Bros. failed on a much bigger stage and burned a lot of people in the process.

Seen now, without the bad post-conversion 3-D clouding the debate (nobody could talk about how the movie didn't work because they were too busy complaining about being ripped off and theorizing about the future of 3-D), the movie's big problem is that it's boooooring. Are we spoiled as audiences, that movies have unlimited resources and can show us anything we can imagine? Or have filmmakers become lazy, depending solely on spectacle and resources and forgetting that none of it means anything if there isn't a story worth caring about? Because that's Clash of the Titans, a movie that's wall-to-wall special effects and action but with nothing to grab hold of, emotionally speaking. Knowing what we now know about the way the movie was totally overhauled in the post-production process, it's no surprise that it's a mess. But even a movie bled of all the "damn the gods" subtext could have kept the action scenes intact and made for a neat adventure movie. This one doesn't, because it tries so hard to be gritty and brooding and serious. There is no sense of fun in any of it.

Some stuff works. The giant scorpion fight is not bad, and at least has some energy. Same for the Kraken battle at the end, even if it is way too short and totally anticlimactic. Some of the creature design is pretty cool, from the blind witches to the ferryman on the river Styx to Jason Flemyng's updated Calibos. But most of it is in service of nothing -- hollow images without a center. It's the bad stuff that stands out more, like the generic team of dirty, vaguely British gladiators that accompany Perseus on his journey, or the blankness of Gemma Arterton as the awful Io (she was clearly aiming for "ethereal" but came closer to "lobotomized") or the surprisingly terrible special effects in the Medusa sequence. Seeing as how it was one of the more memorable set pieces from the original movie and how this new version devotes a LOT of time building up to it, I'm amazed that there was no one making sure it turned out better than it did. It could have been the one thing in the movie that everyone talked about -- yeah, the movie sucked, but that Medusa sequence was really cool -- but instead it's just one more dead spot in a movie filled with them.

And now we get its sequel, Wrath of the Titans, opening this weekend, to determine whether or not anyone involved with the movie learned their lesson the first time out. The trailers look kind of cool (if you ignore the Marilyn Manson cover, because it's still 1998), but so did the trailers for the original. And by the original, I mean the original remake. Without any source material to be tethered to, a mostly different creative team (Battle: Los Angeles director Jonathan Liebsman is stepping in for Leterrier) and a new hairstyle for my best friend Sam Worthington, Wrath has the potential to carve out some new space for itself. My guess? It's not going to be any better, only a little less familiar. I'll still totally see it, because I'm incapable of growth.

Release the Kraken.
Posted by Patrick Bromley at 12:38 AM