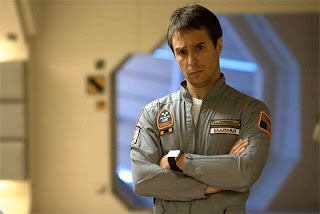 These are the men we like best to watch on screen, even if we don't always like what it is we're watching.

JB: Sam Rockwell - There are performances from the Golden Age of Hollywood that I have always admired: Boris Karloff, Humphrey Bogart, Bela Lugosi. Yet for sheer versatility and uniqueness, the contemporary performer that most impresses me is Sam Rockwell.

I first saw Rockwell in 1999’s Galaxy Quest, where he took what might be considered a one-joke part and turned it into a highlight of the film. Rockwell plays Guy Fleegman, an actor forced to make a career out of fan convention appearances because he appeared in a single episode of a cult science fiction television program. His terror as he realizes that as an expendable, nameless crew member on the original show, he is probably going to die once the cast is plunged into a real outer space conflict, is priceless. Also, Rockwell’s reaction when a fellow crewman makes out with a genuine, tentacled alien provides the definitive reading of the classic line, “That’s just wrong.”

The following year he showed up in Charlie’s Angels, where his performance was the only interesting thing onscreen. He has a wonderful moment where he begins to dance and (spoiler) reveals, through his dancing alone, that he is not a poor kidnapping victim, but the movie’s true (and creepy) villain. It is a terrific moment of pure acting in an otherwise busy, noisy film.

In 2002, Rockwell played Chuck Barris in Confessions of a Dangerous Mind and brought much more to the role than merely an impression of the infamous Gong Show host. This was the first of many interesting, nuanced Rockwell performances to be ignored by the Academy Awards.

The pinnacle of his performances is in Moon, a wonderful, overlooked science fiction film about loneliness and cloning (clonliness?) Rockwell here is the whole show. He is alone onscreen for almost the entire running time, unless you count the robot voice of Kevin Spacey. It is another Oscar-caliber performance.

I appreciate how Rockwell moves back and forth between leads and supporting performances; he will gladly take a “lesser” role if it or the film interests him. He has done memorable supporting work in Heist, Matchstick Men, The Hitchhiker’s Guide to the Galaxy, The Assassination of Jesse James by the Coward Robert Ford, Frost/Nixon, and Cowboys & Aliens. I look forward to more performances from this gifted actor. 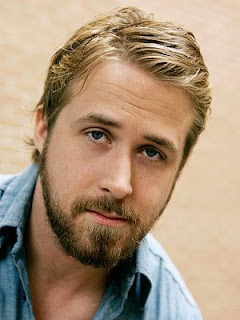 Mark Ahn: Denzel Washington - He makes my list because he makes bad/mediocre movies watchable because he's so good in them. Deja Vu? Man on Fire? I can't tell if those movies are terrible or not, even though if I'd put anybody else in his place those movies are much sillier. But, whatever, I'll watch Book of Eli, or Out of Time, or even Unstoppable and be satisfied (but not Safe House. Never Safe House). I also appreciate that when he's in movies I like, in my memory, he doesn't overpower the story; Remember the Titans is a good example of this.

Cary Grant – I’d heard about old time (I almost wrote “timey”) movie stars, the Golden Age of Hollywood, but like most children born in the late 20th Century, I didn't have an idea about what a movie star was; I wasn't helped by every media outlet's desire to market on-screen talent based on photogenic qualities alone. When I finally did work my way to older films, Cary Grant always got my attention. He dressed cool, he had cool hair, and he acted cool, and not in a way that was detached and brooding, but interpersonal and with some self-deprecating comedic touches. In short, he made being a gentleman cool, instead of dorky or archaic. He was all of those things in Charade, which was why it made my top 5 favorites.

Clive Owen – My embarrassing love for Jason Statham movies has already been documented, so I won’t say more about it. Clive Owen is Jason Statham but a little bit more; more polished, more nuanced, more comfortable with words, however still cut from roughly the same cloth of stoical British actors. I’ve enjoyed his performances ever since he was the Driver in the BMW films (which was the inspiration for Statham’s Transporter movies) and  he’s been in enough enjoyable movies (Inside Man, Children of Men, Sin City, Gosford Park, The International, even Shoot ‘Em Up) that I’ve reached a comfortable entertainment wheelhouse with him. Bring me your mercurial nonchalance which can transform into white knuckle intensity in a blink, Clive, all day. You could call him my white Denzel Washington.

Michael Fassbender - Reading back over the list, I should have called it "British Guys Who Are in Movies that Entertain Me." Fassbender is always enjoyably intense and energetic, including smaller movies/parts, and it makes me excited for rumors about him becoming James Bond (until I remember that the problem with Bond films is not really the Bond, but the scripts, but that's another story). I like his comfort in morally ambiguous or villain roles, or in roles where he can pretend to be Ewan MacGregor. Seriously, why do these guys look so similar?

Alex: John C. Reilly - Everyone has their John C. Reilly moment. For me, it was when I stumbled onto a little gem on the Boogie Nights DVD titled "The John C. Reilly Files," a reel of alternate and extended takes dedicated to this manic force of nature in human form. That the incomparable Paul Thomas Anderson saw fit to allot Reilly his own extras package spoke volumes to me. On sheer diversity, it's hard to best JCR. From a creative standpoint, to think that Officer Jim Kurring and Dr. Steve Brule both spring forth from the same man just baffles me.

He's settled pretty comfortably into the role outlandish man-child in fare like Talladega Nights, Walk Hard: The Dewey Cox Story and Cedar Rapids, almost always elevating the material around him to a quality much higher than it has any right to be. But he's still capable of turning in really thoughtful, nuanced performances in movies like Cyrus and last year's Carnage, in which he stood out among the likes of Kate Winslet, Jodie Foster and Christoph Walz, Oscar winners all.

Let me put it to you this way. I think John C. Reilly could have made a very interesting Daniel Plainview. Think about it. But, there is no way Daniel Day-Lewis could give us Reed Rothchild.

Sam Rockwell - In praising Michael Shannon's performance in Take Shelter early this year, I made a passing reference to a group of actors I hold in such high regard that I would watch them in any movie, even that movie was just these leading men taking a dump for two hours. Sam Rockwell is the president of this proud organization. As [pick your superlative] as he was in Moon, I still feel like we haven't seen Sam Rockwell's best performance. Something about a sky and a limit jumps to mind.

Mike: Clint Eastwood is my favorite actor. He’s not the best actor working, or even in the discussion, but without question Clint holds a special place in my heart.

My love of Clint Eastwood dates back to my childhood. My dad is a big fan of westerns, so I grew up watching everything from Clint in Two Mules for Sister Sara to episodes of Rawhide. But the defining moment of my relationship with Clint Eastwood came almost ten years ago. I saw The Good, The Bad, and The Ugly for the first time in 2003 at the Music Box Theatre (some might say it’s the happiest place on Earth) in Chicago with a packed-house. The movie starts and the first time Clint makes an appearance, it’s actually his voice off-screen. When we hear him for the first time, the entire theater giggled out of some nervousness/excitement at hearing Clint’s raspy voice. I’ve never experienced anything like it before or since. Sure I’ve been to screenings of movies like Raiders of the Lost Ark where people cheer when we first see Indiana Jones, but the difference is we’re sheering Indiana Jones more than Harrison Ford. What I experienced that night at the Music Box was an audience finding complete joy from Clint Eastwood. Like I wrote earlier, there are many actors that are better at their craft then Clint Eastwood, but I’m not sure I can imagine someone like Al Pacino or Gene Hackman causing a room of adults to lose themselves for a split second, becoming more like girls seeing Justin Beiber, then cinephiles taking in a classic western.

Doug: Jimmy Stewart. "Of course!" -your brain. Makes all the other choices on this list seem kind of pathetic, no? Sam Rockwell ... more like Sam Rocks Poorly Compared to Jimmy Stewart, a-dar dar-doy! He's an excellent actor. He's a war hero. He's the grandfather I never had. Now I just need to see a Jimmy Stewart movie besides It's a Wonderful Life. KIDDING. Because An American Tail: Fievel Goes West.

Patrick: John Cusack - I'm not going to make the argument that John Cusack is a great actor, even though I think he's a good one. I'm not going to make the argument that he only makes good movies, because he has made a LOT of garbage. Maybe it's just some kind of wish fulfillment on my part -- that when I watch JC (COINCIDENCE??) on screen, he's who I wish I could be in real life: dry, cerebral, cool (instead, I am a dummy). Like Tom Hanks (who I also could have picked), he became an unconventional leading man not by compromising and shedding what was interesting about him, but instead by embracing those things and making for a leading man that audiences hadn't seen a bunch of times.

He's also one of the few actors that I'm happy to watch in anything -- again, not because he's always in good stuff (Must Love Dogs), but because I just like to watch him on screen. There is a comfort and a consistency to John Cusack. He's not a "chameleon." He's pretty much always John Cusack. But sometimes, that's what we want from our favorite actors -- we want the persona that we've come to love, not for them to disappear into a part in every movie. It's also why we love Denzel Washington or Jimmy Stewart or Clint Eastwood. We pretty much always know what we're going to get.
Posted by Patrick Bromley at 9:57 AM