My Favorite Bond: Alex on GoldenEye 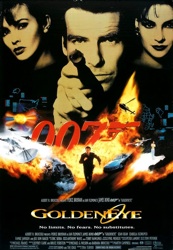 I was 12 years old when I first saw a woman have an orgasm. That woman was Xenia Onatopp.

At the risk of being overly brief, that one trivial fact encompasses the thrust of my relationship with Bond franchise. I lack an encyclopedic knowledge of the series that would be necessary to tell you precisely what GoldenEye does that is particularly innovative or revolutionary when compared with the other installments. But as Patrick expertly noted in his My Favorite Bond entry, the Bond films have employed such an expansive array of tones and tactics that they will inevitably trigger unique responses in everyone who watches them.

I guess I settle on GoldenEye because it was the first Bond movie that really seemed like it was for me. At the time I saw it, I want to say I had seen maybe half a dozen or so other Bond movies across all three decades that saw their releases. They were enjoyable, but in the sort of way that the Museum of Natural History is enjoyable: enlightening, yet distant. Important, yet kind of stodgy. But with GoldenEye, everything from the aesthetic (a deliberate pivot to mid-90s action fare) to the genuinely engrossing story line (hell, it got 12-year-old me reading up on the god damn repatriation of the Cossacks after World War II) felt new and vibrant and dangerous.

Now it's probably fair to say that the reason it felt new was that, at that time I saw GoldenEye, it was, you know, the newest Bond movie. But I think it's worth noting that GoldenEye was released a full SIX YEARS after its predecessor, Licence to Kill -- the longest hiatus between installments in the franchise's history. This was thanks in large part to some legal morass, but also as part of an effort to really attempt to broach some bold new ground. And while you can't deny the energy Brosnan brings to the title character, the real boldness lies in the film's villains. The first Bond film released after the fall of the Berlin Wall, GoldenEye shepherds the series out of the Cold War era while including a critical plotline that deals with the ramifications of that real world event.

Beyond the novelty of making him an MI6 turncoat (he knows ALL OF BOND'S WEAKNESSES!), the most compelling thing about Sean Bean's Alec Trevelyan is that his beef with MI6 seems completely justified. While I can't condone the use of electromagnetic warfare to cripple one of the largest economies in the world, GoldenEye smartly frames Trevelyan's motives for doing so as an act to avenge the death of his parents, which he attributes in large part to the betrayal of the British government. Even Bond laments that Cossack betrayal was "not our finest hour." Is his plan to work his way deep into an elite spy agency to execute a convoluted plan contingent on technology that probably didn't exist when he started this whole revenge kick a little far-fetched? Certainly, but I love that Trevelyan's madness has such a small and personal genesis. Bean is excellent, opting not to stray into the cartoonish territory so well-worn by many of his predecessors. 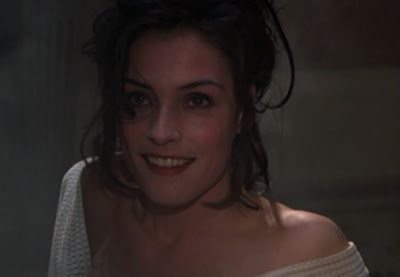 Which brings us back to Miss Onatopp. Bond has faced his share of female antagonists, almost all of whom used their physical attraction as a tool for their treachery. But I'm hard-pressed to recall a Bond girl who so literally used sex as a weapon. As I hinted up top, the appeal of this character was pretty much X's and O's: I was 12, she was stunning and she was having lots of dangerous sex. I am also both fully aware and appreciative of Onatopp's character. It's what keeps GoldenEye from totally disappearing into the crowd of assembly line action movies in the run-up to the turn of the century. Keeping the film honest are genuinely humorous turns from Joe Don Baker as Bond's CIA envoy Jack Wade and Robbie Coltrane as Russian gangster Valentin Zukovsky. Also, there is a blink-and-you'll miss her turn from a very young Minnie Driver as Zukovsky's tone-deaf lounge singer girlfriend. They color up the periphery enough to keep it from playing like an endless string of action set pieces.

And man, are there some set pieces. They haven't all aged well (which actually creates some of the nostalgia that I suspect endears earlier installments to older viewers), but Bond's opening free fall to an abandoned plane careening off a runway and his joyride in a tank through the Russian streets are among the series' more breathtaking moments.

For people of my age, it's impossible to tell the story of GoldenEye the motion picture without discussing GoldenEye the first-person shooter video game originally released on Nintendo 64 (and re-issued on two subsequent platforms due to its immense popularity). A staple of after-school hangouts and sleepovers, the game, which wasn't released until two years after the film, elevated the first-person shooter out of the bleak, stilted constraints of Doom and into a fully inhabitable world. Complemented by a multiplayer battle format that is still being replicated throughout the gaming world, the narrative single-player mode was so immersive that it actually sent me back for repeat viewings of the film to see if i could glean any hints as to how to surpass a particularly troubling stage. This makes zero sense at all, but it speaks to how well one format complements the other. It's also worth noting that the creators of the video game used it as something starter kit for broadening your horizons to different movies in the series.

With the inclusion of specific weapons and characters in the multi-player mode, I was compelled to seek out their cinematic origins. What the hell is The Golden Gun? What is this Moonraker laser? Who the fuck is Baron Samedi? Questions asked and answered. 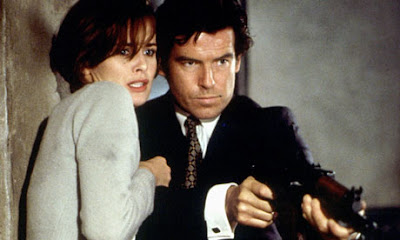 Best Bond Theme Song: "GoldenEye," by Tina Turner. It's the way she twangs and carries the "Eye" portion of the title. I have no earthly idea why Bill Clinton didn't just cancel the Grammys that year and instead issue an executive order mandating that everyone listen to this song for three hours straight on the night the awards would have been held.

Coolest Bond Car: Remote controlled BMW from Tomorrow Never Dies. There's a terrific shot of Brosnan laughing heartily while eluding the bad guy while driving the car via remote from the back seat. It's the most human moment in all the Bond films. I'm serious. It looks like an outtake.

Best Bond One Liner: In From Russia With Love:
Tatiana: [trying on a dress] I'll wear this one in Piccadilly.
Bond: You won't. They've just passed some new laws there.

Previously on "My Favorite Bond":
Patrick on On Her Majesty's Secret Service
JB on Goldfinger
Posted by Patrick Bromley at 6:58 AM