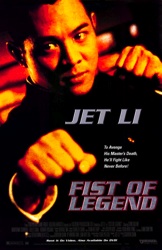 If you love movies, you love talking about your favorites, and I love the crap out of Fist of Legend.

Fist of Legend came out in 1994, during, arguably, Jet Li’s most successful and my favorite portion of his career; this particular era was also the best combination of Li’s acting and physical skills. Li has played a variety of heroes, but here he plays the humble, morally upright protagonist, who consistently puts aside his personal desires for what is right.

Li’s morally upright protagonist is Chen Zen, a Chinese citizen studying abroad in Japan, only to rush home to Shanghai when he finds that his master has died under (what he later discovers to be) mysterious circumstances in a duel with a Japanese master. Along the way, he deals with the leadership of his kung fu school (Jingwu), his Japanese girlfriend, racism, and saves China from nothing less than an international incident, all while paying homage to Bruce Lee’s Fists of Fury (or, The Chinese Connection), of which this is a remake. All in a day’s work.

I love that director Gordon Chan bothers with putting together a story that makes sense around the action. Fist of Legend rises above the level of many action movies by having a narrative that has characters that change. (One could argue that Chen Zen isn’t one of them, but he gets a pass as the main character.) Chan puts in almost too many moments of character beats in an effort to flesh them out, with each secondary character getting at least a few moments to have a personality; an example of this is the son of the deceased master, Ting’en (played by Chin Siu-ho), who has a particularly lengthy character arc. It distracts a little bit from the main storyline, and I sort of wish that screen time was spent on Jet Li, but I appreciate Chan’s effort to up the stakes a little bit in the fighting. 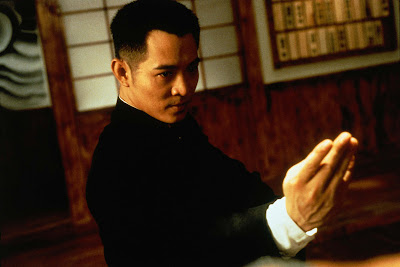 And about that fighting: it’s terrific. One reason is that there are a plethora of totally competent fighters amongst the secondary characters; I’ve already mentioned Ting’en, but Funakochi (played by Yasuaki Kurata) gets his own ten minute showdown with Chen Zen, and that’s before the final showdown with ultimate badass General Fujita (played by Billy Chow). Funakochi and Fujita are more than capable of holding their own in action sequences, and they are the highlights of a movie that rarely goes more than twelve minutes without some fighting. Yuen Woo-ping’s fight choreography in this movie (and others) led to his eventual crossover into Hollywood; his work on The Matrix trilogy and Crouching Tiger, Hidden Dragon are known, but he also worked on the Kill Bill movies, Kung Fu Hustle, and Unleashed.

The fights here are most notable for their lack of wirework; this isn’t a fantastical fight movie, although there are some of the normal effects like adjusting film speed and guys getting pulled through windows with a cable. On the DVD commentary, Gordon Chan mentions that he tried to include the ceiling in the frame to show that there wasn’t any wirework. For the most part, it is Jet Li and his opponents at close to realistic speed, just fists and feet, and it earns the respect of the viewer for the quickness of these athlete-actors. The rhythms of the final encounter between the gigantic General Fujita and the diminutive Chen Zen (it looks like an eight to twelve inch difference in height, but it’s closer to six) plays out like its own three-act play. It’s not the close quartered, frenetic fury of something like the final battle in The Raid: Redemption, or a more gimmicky finisher like The Legend II (bench fight), but it ebbs and flows, with attacks quick and slow, where either man seems to gain the edge only to suffer multiple setbacks, only to figure out a way around the setbacks. The first time I watched it, I swore the fight lasted thirty minutes, but it’s actually ten, which I think says much about the stakes that Chan has worked hard to build up in the rest of the movie, along with the skill of the Li and Chow.

Jet Li gives a decent performance in one of his stoical hero roles; if I were to criticize, I’d say the character of Chen Zen suffers a little bit from Braveheart disease, where the hero doesn’t develop much, but starts the movie as perfectly formed. However, this is a rather common trope in most action movies, and the character never comes off as egotistical as William Wallace; the character has specific motivations and goals throughout. I thought it was an interesting choice in comparison to Bruce Lee’s performance in the character in Fists of Fury; there, Bruce Lee is a snarling beast whose eagerness to fight leads to moments of regret over the rashness of his actions. This also feeds into the exploitation vibe of Fists of Fury, which has a much more straightforward revenge narrative. Jet Li is much more controlled and composed, which probably works better for the additional narrative pieces in Fist of Legend, but there’s a part of me that wishes for a version where he plays it furious like Bruce Lee. 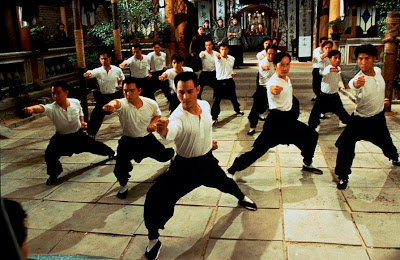 The best version of the movie available (and easiest to find) on disc in America is the Weinstein Company’s version they released under their Dragon Dynasty label. It’s got lots of extra goodies and most importantly has the option to watch it in Cantonese with English subtitles, which is what you want.

Jet Li (who turns 50 this year) has continued to have an interesting career, with varying degrees of success in the Hollywood system, but Fist of Legend stands out as a highlight in his work, and in the genre of modern, realistic kung fu movies.
Posted by Patrick Bromley at 7:08 AM

Probably my favorite Jet Li film as well. By the way if you are not aware, there is an extended version of "Fist of Legend" floating around with a slightly different ending.

Missed opportunity to use the word "Korner" in the title ...

Oh, believe me, that's what it was originally called. But then I thought a) we should save cutesy titles for WTWD and b) that many Ks make me nervous.

I've heard this too, but I always thought that people were getting an extended cut confused with the different end credit sequences (of which there are, like 50 different ones). At any rate, I haven't seen whatever extended cut there is.

Welcome to the site, Tom! (I feel like this is the first time I've seen you in the comments)

Great article, Mark. I am a big fan of kung fu and Fist of Legend is definitely one of my favorites.

When I was kid, right around when DVD's were first starting to come out, my father had this DVD sampler of fight scenes from different movies because he subscribed to some film magazine. One of the scenes was the final showdown between Chen and Fujita. It blew my 10yr old mind, and I instantly wanted to track down a copy of Fist of Legend.

Thanks for the welcome aboard. This is a great site for film buffs you guys have put together.

Over the years I have collected several different releases of this film and it seems they all have changes here and there with scenes cut or added. That said, it looks like the "extended" cut is the Taiwan release published in 1997 by Ritek. It runs about 106min.

The additional scenes develop a bit of pathos for some of the supporting characters. Such as one with Huo Ting-en smoking opium with a prostitute. A huge change from the Miramax version (first one I saw) where if memory serves, the woman is just sort of portrayed as his girlfriend.

Check out the entry on Wikipedia for a description of the extra scenes. http://en.wikipedia.org/wiki/Fist_of_legend#Taiwan

Got it. I always have mixed feelings about the Ting-en extra scenes; part of me wants to get rid of them, even though I understand why they're there. Also, related, it feels like there's some weird sexual tension between Ting-en and the head lady in charge of the school, but it only gets hinted at.

Thanks Jake! I'm planning on doing some more write-ups on kung-fu stuff, so I'm glad people like it.

My first experience was on a grainy VHS that one of my college neighbors down the hall had smuggled in from his Taiwanese relatives. Needless to say, the ridiculously terrible overdubs did not scare me off of how kick-ass the action was.

I'm a big fan of Jet Li, although I haven't seen this movie. I'm gonna have to check it out now. My favorite Li film (and probably my favorite martial arts film) is his last one, Fearless.

Fearless does so many things that i feel other Martial arts films don't try to do. But I'm definitely gonna check out Fist of Legend. Thanks for the column.

I really enjoyed Fearless, also, because it's one of the heroes that he plays that I really like: the stoical, morally upright protagonist. He can play something for laughs (although not at Jackie Chan's level), or for youthful naivete, but I just love the honorable tough guy hero.

What did you think of War and Kiss of the Dragon? I think I'm one of the few people who like those movies the best from Jet Li's US output.

I'm very behind on his pre-Lethal Weapon 4 work so I need to give Fist of Legend a watch. You had me at 10 minute fight scene. Ever since seeing The Heroic Trio on cable when I was about 10, I've been obsessed with kung fu scenes that go on and on and on.

Nice article Mark, I've always liked Jet's stuff (my introduction to him was Black Mask personally) but I have to admit my favorite martial arts movie is Legend of Drunken Master (aka Drunken Master 2) I remember seeing that movie in the theatres back when Jackie was hot after Rumble in the Bronx and they were releasing some of his earlier movies he made out of the USA. While I have always liked and respected the awesomeness of Jet Li, Bruce Lee, and the rest of the gang Jackie's crazy combo of comedy and kung fu has always been my favorite film treat.

Its a real shame Jackie was never able to make a truly great action film in the US (closest he got was Shanghai Noon in my opinion) but that being said he is one of the very few actors I will go see and not care what the plot is about.

I didn't see War, and thought Kiss of the Dragon was ok. It combined two things for which I have a soft spot, which are kung fu and Luc Besson. I thought the filmmmakers used Jet Li a little bit better than in the other stuff he had been in up to that point; what always eats at me is that his stoicism in his Chinese films always comes off as badass or detached, whereas in his Western stuff, it usually comes off as neutered, for lack of a better word. I don't know, maybe his lack of command in English added to that, but Schwarzenegger, another actor who plays the Other, never seemed neutered.

I love Jackie Chan as well; there is truly nobody like him at all in the history of cinema, and it's kind of a gift that he's still working. I'm definitely planning to write something about him soon.

It's hard for most foreign stars to break in as action heroes here, unfortunately; there is a road littered with the remains of Chow Yun Fat and Tony Jaa and a bunch of others somewhere. Maybe with the influx of some Asian directors (or at least non-Western directors) there might be a breakthrough.