Doug: Easy. Ethan Hawke and Julie Delpy in Richard Linklater's films Before Sunrise (1995), Before Sunset (2004) and the upcoming Before Midnight (2013), which I haven't yet seen, but I've only heard great things about. They're so natural together -- so at ease and comfortable talking for [literally] hours -- that it's easy to forget that they're ACTING in a MOVIE. As they're falling in love with each other, we fall in love with them. When their relationship hits the inevitable road bump(s), we root for them, knowing in our hearts that these two souls are meant to be together. You know, make-believe souls. Masterful filmmaking and a mesmerizing character study. Never have movies about two people just walking/talking been more captivating.

Adam Riske: Jennifer Lawrence and Bradley Cooper, Silver Linings Playbook - I was not a fan of either Jennifer Lawrence or Bradley Cooper before seeing Silver Linings Playbook, but I was so won over by these two performances that now I want to see them in a romantic comedy together every year. Lawrence always seemed kind of severe in her performances prior to Silver Linings Playbook, but she's very loveable here and a lot of that has to do with her relaxed rapport with Cooper. Though he's always been kind of self-aware, in this movie Cooper seems to shut off that part of his persona and just enjoy falling in love with Jennifer Lawrence. I really dig how unforced but apparent it is that in every subsequent scene their two characters are falling more in love. The last 20 or so minutes of this movie is the most romantic f-ing thing I've ever seen in my life. It kills me. 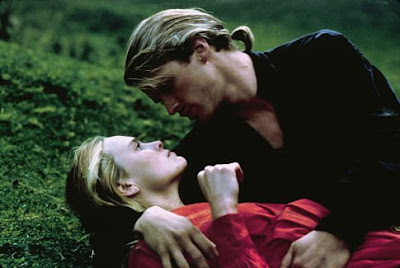 Heath Holland: One of my all-time favorite movie couples is Westley and Buttercup from The Princess Bride. Not only do their names sound like a candy store in Harry Potter, but they embody a special, fairy tale romance…literally. The movie is all about true love and the lengths that people will go to in order to attain and hold on to that love. But you know, I have to wonder if things worked out for those two lovebirds after the credits rolled. Let’s face it: Wesley spent years at sea as the Dread Pirate Roberts, and there’s no telling what kind of venereal diseases he picked up on all those ports of call. Plus, who can say that Westley is totally okay after being hooked up to that death machine? Let alone the long term side effects of prolonged exposure to iocane powder. But while it lasts, those kids definitely have true love. As you wish!

Erich: David St. Hubbins and Nigel Tufnel, This is Spinal Tap - I spoke in my favorite movies podcast about how much I love Spinal Tap. It's very funny, of course, but that's not all. The misadventures of "the world's loudest rock band" could easily have been a grab-bag of one liners and uncomfortable situations. The movie is that at times, but at the core it's the story of a lifelong friendship. By the time we meet St. Hubbins and Tufnel (played by Michael McKean and Christopher Guest), they have been making music together for decades, from grade school skiffle groups to the disastrous American tour that threatens to tear them apart. For all the band goes through during the movie, though, they don't hit bottom until Tufnel and St. Hubbins split. Even though I've seen the movie dozens of times, I'm always thrown by the scene where the co-leads scream obscenities at each other during a recording session. There's nothing funny about it. At all. It feels out of place in a comedy about rock excess and stuffed spandex. Which is exactly why it belongs in this movie. You can't have the sweet without the sour. The disintegration and eventual reconciliation of David and Nigel says more about long-term friendship and creative collaboration than many dramatic movies. Without that relationship, the movie would be one long excuse to laugh at long-haired rockers who sing about large bottoms and sex-related farming. Which is probably what it would be if it was made today. Or remade. ...I just felt a chill run down my spine. 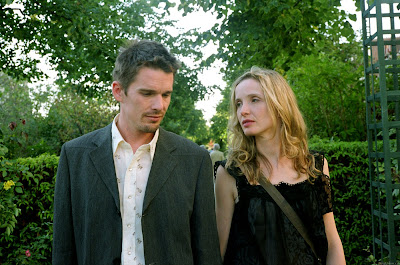 Mark Ahn: Celine and Jesse, Before Sunset - Full disclosure: I’m not a huge fan of romantic stories (although I really love romance), because I’ve always felt that romantic movies were too sentimental, and my temperament doesn’t seem to be geared for them. I respect that other people like them, getting carried away on the emotional roller coaster of two people trying to navigate each other’s complexities; I’d rather get whisked away by alien worlds, or the puzzles of psychological thrillers, or the kinetic goosebumps from watching explosions. What I really love about Before Sunset (and Before Sunrise) is that Celine (Julie Delpy) and Jesse (Ethan Hawke) feel real. Linklater, Hawke, and Delpy have the advantage of having inhabited these characters before, and they use their advantage to push their story forward. Nearly the whole movie feels genuine in the way that two people would talk, because their connection is not about grand sweeping gestures, but unearthing each other’s anecdotes, making each other laugh, hurting each other, getting upset at their vulnerability, looking for new things to push the conversation along. They are intimate in the most extraordinary of ways, constantly finding something within the other that is new, and that feels true and valuable the way that love does. When Before Midnight rolls around this summer, I will gladly take a break from my beloved alien thriller explosions to spend more time with Celine and Jesse.

Alex: Clementine Kruczynski and Joel Barish, Eternal Sunshine of the Spotless Mind - For all of its high-concept quirkiness, Eternal Sunshine of the Spotless Mind is, at its core, a quite literal examination of the nature of compatibility or, more pessimistically, incompatibility. A lot of films have presented their central paramours with a moments of doubt on the strength of their union, the unique plot mechanics in Michel Gondry's 2004 masterwork give us a situation in which Joel and Clem have empirical proof that they are not meant for one another, yet make the choice to try anyway. Despite this conceit, the movie somehow manages to leave me more optimistic than ever that these two will make it work. This is because we, the viewer, have just watched them try so valiantly to save Joel's memory of their deteriorating relationship, to no avail. But you can't overstress the fact that Joel and Clem have no idea that they even did this. Their collective choice to give it a try is a new manifestation of this same desire to preserve what they have. I've seen this movie at least 15 times and that moment never fails to level me.

Patrick: Doug has reminded me that I've already answered this question, and clearly gave the correct answer the last time around: Tango and Cash. Done. End scene. LEMON OUT. But, for your amusement, dear readers, I will give it another go. There are movie couples that I love because they have chemistry and provide good real-world role models for a young man that grew up watching tons of movies and dreaming of someday finding that kind of love (SPOILERS -- he did). John Cusack and Daphne Zuniga in The Sure Thing come to mind, because they truly get to know each other as people before realizing that they care about one another. Harry and Sally in When Harry Met Sally... have to be in the conversation, not just because it's one of the best romantic comedies ever made but also because they build years of genuine friendship together before falling in love. Yes, plenty of movies have done the "OMG I've been chasing the wrong person and have been so blind to the fact that the right person has been right in front of my eyes all along and it's my BEST FRIEND!" routine, but it's always just a plot device and a convenient way to tack on a happy ending. Harry and Sally earn their friendship, and, subsequently, their romance, and I'm a big, big believer in ending up with your best friend (just ask Erika...or Doug). Same goes for Ted and Mary in There's Something About Mary. But my favorite movie couple of all time might be Clarence and Alabama in True Romance, a movie I've already written about at some length. I love how much they immediately understand one another. How they can't keep their hands off one another. How each thinks the sun rises and sets in the shadow of the other, and how they never ever waver from their total devotion to one another. Clarence and Alabama aren't just in love. They're in love in a movie. As lifelong movie fans, isn't that what all of us have always wanted? 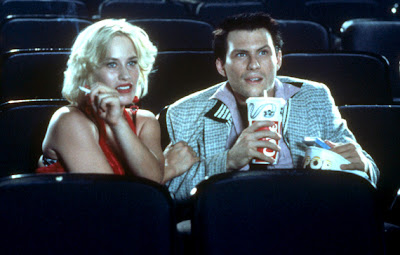 Posted by Patrick Bromley at 7:29 AM