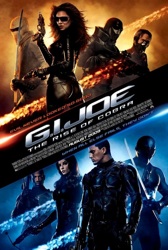 Knowing is half the battle.

G.I. Joe: The Rise of Cobra is another summer movie based on a toy line and cartoon that were very popular in the '80s. It is produced by HASBRO. It clearly exists because the first Transformers movie was a huge hit and, in fact, was released in the summer of 2009 -- the same year that the Transformers sequel, Revenge of the Fallen, hit theaters. Despite their similarities, there is a big difference between the two: Transformers is a movie for 12-year olds made by adults who are assholes. G.I. Joe is a movie for 12-year olds made by 10-year olds.

Yes, Stephen Sommers is a 10-year old who directs movies like a kid in a candy store, except the "kid" in question is one of those kids who needs to wear a harness and has been told by doctors that he shouldn't be eating sugar (Hyper-Hypo!). If you're not on his wavelength, it can be irritating. If you can dial in to his enthusiasm, it's actually kind of charming. 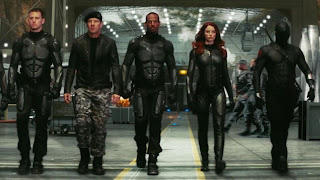 In a summer marketplace filled with big, dumb, loud movies, G.I. Joe: The Rise of Cobra is bigger, louder and dumber than most -- it's so silly, and it somehow grows on me every time I watch it. A lot of these Take Two columns only confirm my initial reactions to a movie; I guess this rewatch of G.I. Joe does the same, since I have always been kind of charmed by the movie's over-the-top craziness. The problems are still the problems, but by now have become absorbed into the Greater Whole -- as much as it wouldn't be G.I. Joe: The Rise of Cobra without the things it does right, it wouldn't be the movie without the mess, either. Like Billy Wilder used to say, you have to take the sour with the sweet. Billy Wilder was for sure talking about G.I. Joe: The Rise of Cobra.


It's pretty obvious from the outset that G.I. Joe is very, very stupid, as it begins in 1641 France so that it can tell the origins of the Destro, a second or third-tier villain in the movie (who doesn't really even appear until the last couple of minutes...spoiler?). This would be like if Star Wars opened with a flashback explaining the ancestry of Grand Moff Tarkin. Don't worry -- the film then jumps ahead to the "near future," where two soldiers, Duke (Channing Tatum) and Ripcord (Marlon Wayans) are tasked with delivering warheads to NATO. They are ambushed by the forces of Cobra, a team of evil, mindless supersoldiers led by the Baroness (Sienna Miller) and the ninja Stormshadow (Byung-Hun Lee). Duke and Ripcord are rescued and recruited to join G.I. Joe, an elite covert special forces team. There's the head of G.I. Joe, General Hawk (Dennis Quaid), the silent ninja Snake Eyes (Ray Park), communications officer Breaker (Saïd Taghmaoui), weapons specialist Heavy Duty (Adawale Akinnuoye-Agbaje) and Scarlett (Rachel Nichols), who has red hair.

Still following? Because we're not even close to done. See, Duke used to be engaged to The Baroness, who once was named Ana and who blames Duke for the death of her brother (Joseph-Gordon Levitt) during wartime. Only her brother is not dead -- he's been transformed into a masked Cobra scientist, who is developing an army and wreaking havoc on the world with nanomite technology (which are a kind of biomechanical parasite that either eats away at stuff OR makes mind control possible, which is kind of like having a household cleaner that gets out tough stains OR makes mind control possible) purchased from arms deal James McCullen (Christopher Eccleston). Also, there's a villain named Zartan (Arnold Vosloo) with plans to change his face. And Stormshadow and Snake Eyes have a secret ninja past dating back to when they were little kids. And Ripcord wants to date Scarlett, which is also a thing. So the Joes have to put a stop to Cobra's New World Order and possibly pull Ana/Baroness back from the clutches of Cobra's influence. 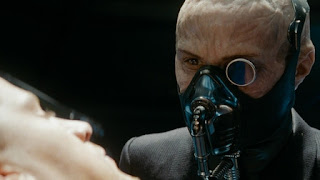 In case you hadn't already arrived at this conclusion, there are way too many characters and way too much plot in G.I. Joe: The Rise of Cobra. Because the toy line and the cartoon had a roster of characters dozens of characters deep (every time you introduce a new character, there's a new figure you can sell), the movie tries to incorporate as many of them as possible in the interest of fan service. But Sommers also wants to give every one of these characters an origin or a back story or a separate sub-plot to be paid off. So there are flashbacks to Snake Eyes and Stormshadow as children, as well as flashbacks to Duke and Ana's courtship, as well as flashbacks to Duke and Ripcord and JGL in the war. It all becomes kind of ridiculous, but ridiculous is exactly what the movie is selling. When it tries to play it too straight -- chiefly, the relationship between Duke and The Baroness -- it loses its identity, but never too much. Even the movie's view of romance comes off the way a 10-year old sees it.

Like James Cameron, Stephen Sommers (who is only credited with the "story" here) is kind of a bad writer; unlike James Cameron, he is not always good at directing action. He's way better than, say, Michael Bay in the Transformers movies (the first two, anyway), but he sometimes confuses BUSY and LOUD for exciting. What Sommers offers is energy and enthusiasm, which his movies have in spaaaades. When he uses his powers for good, it can be something really silly and fun like his remake of The Mummy or Deep Rising. When he uses them for evil, it's Van Helsing, one of the worst movies of the 2000s (seriously, has a worse movie ever been made from a better concept?). G.I. Joe exists somewhere between The Mummy and Van Helsing: it's a lot of goofy fun that gets overwhelmed by CGI activity and noise too often. The movie's centerpiece, a long chase sequence in the streets of Paris, is one of the highlights, but is marred by by a lot of bad CG. This is the kind of movie that's very busy and obviously expensive, albeit in a cheap-looking way. There is still plenty of great stuff to look at, by which I mean mostly Rachel Nichols and Sienna Miller in skintight leather. Because goddamn. 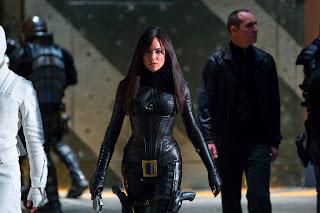 The screenplay sprinkles in a number of "clever" (they are not clever) references to the G.I. Joe toys and cartoons, like when Dennis Quaid says "Knowing is half the battle!" or someone refers to a character as a "real American hero" or Marlon Wayans jokes about "lifelike hair...and a kung-fu grip!" They are shoehorned in, and they are stupid. Who are these references for? The G.I. Joe fans? The ones who are SEEING A G.I. JOE MOVIE? Great job, Stephen Sommers. You are capable of preaching to the choir.

What the movie gets right is the tone. This is a property based on a toy and an '80s cartoon, and while the contemporary blockbuster model is to make things "grittier" and more realistic, Sommers wisely says "fuck all that" and goes the complete opposite direction. There is nothing realistic about The Rise of Cobra, from the cartoonish, green nanomite technology to the super-soldiers to the underground base to the frozen Arctic base to the underwater base. There are a lot of hidden bases in the movie, is what I am saying. There would be no way to introduce concepts like Cobra or Destro in any grounded way, so Sommers embraces the goofy and turns the whole thing into a live-action sci-fi cartoon. I think the approach turned a lot of people off in 2009. In 2013, we're living in the post-Avengers world. It's possible for a big blockbuster "property" movie (a movie that's based on a comic or a TV show or a cartoon or a toy -- which is to say all movies; G.I. Joe manages to cover all the bases) to be big and colorful and fun. The Rise of Cobra plays better now than it did just four short years ago.

It should not. The performances, from a crazy mixed bag of a cast, are all over the place. The last year at F This Movie! has found me developing a great love of Channing Tatum as a movie star, so one would think that I would enjoy his performance in G.I. Joe a lot more now that I'm a fan. That's not really the case. He's either bored by the material or just out of place in this kind of silly, campy kids' stuff; the result is exactly the kind of stiff, marble-mouthed performance that helped me form my opinion of Tatum in the first place. Dennis Quaid, on hand as elder Joe "Hawk," appears to be doing some sort of weird John Wayne impression, but mostly feels like someone's dad who won a contest and got a part in a movie. Rachel Nichols looks fantastic but hardly registers, while Joseph Gordon Levitt is wasted by being obscured under a mask and having his voice dubbed. It's crazy to think that both Levitt and Tatum would go on to be huge movie stars in just a few short years, and they're working together in this goofy movie. 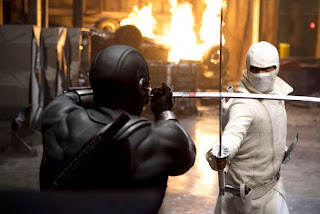 Marlon Wayans ends up being one of Rise of Cobra's biggest liabilities, even though it's not entirely his fault. His character, Ripcord, is saddled with all of the comic relief, and that's something that Stephen Sommers doesn't do very well (or maybe he does it great, but we have totally different ideas of what is funny). He makes jokes pretty much nonstop, and not one of them lands -- all of his material is reminiscent of the kind of "humor" found in Michael Bay's Transformers series. That's really the connection between the two movies; not the fact that they're both summer blockbusters based on Hasbro toy lines. It's the lame attempts at humor. Just think if the movie had actually been funny. So many of its problems could be more easily overlooked if we could actually laugh with the movie.

Which isn't to say we should be laughing at the movie. Beyond the bad jokes, Rise of Cobra has a good sense of humor about itself. This was always my argument for why I could like the G.I. Joe movie but not the Transformers one. Transformers wants us to think it's something more, while G.I. Joe knows exactly what it is. The lesson is this: don't make movies based on toys, Hollywood. But if you have to (and you never really HAVE to), make them more like this and less like Transformers.

If the goal of a movie like this is to make something that reminds us of what it was like to read comics or play with our action figures as kids, G.I. Joe: The Rise of Cobra does that. Stephen Sommers is a big kid who plays with action figures. It just costs $175 million when he does it.
Posted by Patrick Bromley at 12:26 PM