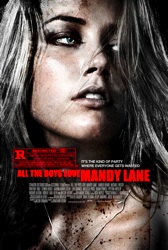 Since 2006, All the Boys Love Mandy Lane has been one of the Holy Grails of horror movies -- championed by many, but impossible to see. Thanks to the Chicago Critics Film Festival, I can finally check it off the list. Was it worth the wait?

The short answer is "not really," but there's more to it than that.

Mandy Lane is the first movie directed by Jonathan Levine, made seven years ago but held up after the Weinstein Company delayed its release, then sold it off to a company that went under and took the movie down with it. Levine has long left his debut movie behind, having gone on to a successful career directing The Wackness, 50/50 and this year's Warm Bodies. It's easy to see why Levine would "pop" off the movie, and why his work in Mandy Lane would get him hired to direct more movies. It's very well-made: stylish without being self-conscious and clever in the way that it sometimes sends up horror movie tropes. It takes an '80s approach to a '70s premise and combines it with some Aughts-era reflexivity. I only wish it added up to more.

Amber Heard plays Mandy Lane, who returns to her high school after a summer and surprises all of her classmates by having gotten really, really hot in the last few months (to the movie's credit, there are no flashbacks or photos shown of the "old" Mandy). Suddenly, she's in with the popular crowd as every guy in school tries to be the one who claims her; unfortunately for them, she's more interested in hanging out with her best friend Emmet (Twilight's Michael Welch) than in any of the cool kids pursuing her. Months after Mandy and Emmet have had a falling out and Mandy has officially become one of the popular kids, she is invited to spend a weekend with them up at a ranch, where much drinking, partying and (hopefully) sex is planned. Would you be surprised to find out that things don't exactly go as planned, and that someone shows up to start killing everyone off? 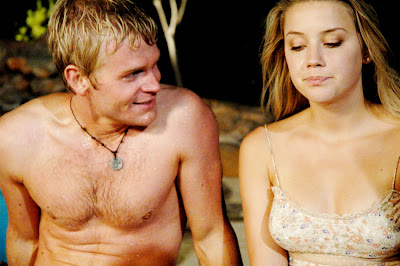 It's not the movie's fault that it was delayed seven years, but I can't help thinking All the Boys Love Mandy Lane would have played much better in 2006 than it does now. We've had a lot of good horror movies since then (and plenty of terrible ones, too), many of which deconstruct the genre with greater success than this. Seven years' worth of an increasingly inflated reputation can't have helped, either -- few movies could live up to those expectations. Separated from the hype, Mandy Lane will hopefully be the kind of movie that could easily end up being rediscovered in a few years as being "pretty good," the way we all realized now that some '80s horror movies like My Bloody Valentine or The Funhouse are pretty good.

Though its setup would suggest a horror mystery in the tradition of Scream or I Know What You Did Last Summer (to name the first two that literally popped into my head), the identity of the killer is revealed fairly early on and without much fanfare; it's so easy to predict that if it had been withheld it would have made for one of the lamest reveals in genre history. Mandy Lane has different surprises in store, but those are pretty much telegraphed, too; if some of the genre commentary had landed better, it might work better thematically. Instead, the film is forced to take leaps it hasn't earned.

Every once in a while, it becomes clear what Levine is up to; a scene in which Amber Heard changes into a bikini suggests all kinds of subtext about the roles of women in the genre and the sexualized "innocence" of the traditional Final Girl. Also, it shows Amber Heard in a bikini. Mostly, though, the movie's intentions are muddled by inadequate motivations and disappointing scares. Having the victims of a horror movie dispatched with a simple shotgun may very well subvert the elaborate use of garden tool killings we've come to expect, but that doesn't make it effective. For all its attempts to acknowledge and then deflect horror clichés, the movie fails to realize that just not doing what other movies do does not a satisfying movie make.

The things that work about All the Boys Love Mandy Lane are what Levine brings to it, because everywhere else the movie disappoints. The scares aren't really there, the gore is mostly uninteresting and the characters are difficult to care about. Amber Heard is very, very pretty, but it's clear that this is an early performance for her; she has gotten better over the years, and she's not yet capable of pulling off some of the nuances of the Mandy Lane character. The other actors are fine, but mostly relegated to playing either terrible people or red herrings. They're too awful for us to be invested in their survival, but the movie lacks any sense of fun in watching them get knocked off, too. 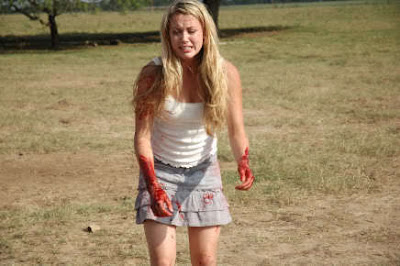 An interesting thing happened in the context of the Chicago Critics Film Festival: all of the movies began to inform and comment upon one another. Both the Star Wars fan documentary The Force Within Us and the opening night selection Grow Up, Tony Phillips deal with loving something passionately even in the face of adversity. The Kings of Summer and The Dirties address what happens to teenage male friendships when a girl enters the picture. The Dirties and All the Boys Love Mandy Lane both tell stories about what happens when teenagers are bullied or mistreated. It's very likely deliberate on the part of the programmers -- or, at the very least, a result of particular tastes of those picking the movies.

It works to the benefit of a movie like All the Boys Love Mandy Lane, which doesn't hold up on its own but which becomes more interesting as part of a bigger conversation with other movies. Had I gone to see the movie all by itself, I would have been very disappointed. Instead, it became part of a larger experience, bouncing around in my head against the other stuff I had seen that day and getting credit for things it may or may not have done. I guess my point is that if you're going to see the movie, make sure you see four or five other interesting movies first.

Seven years later, I fear it's too late for Mandy Lane. The world has moved on. We'll never know if the film would have found success when it was supposed to; The Weinstein Company and fate conspired to take that away. Now it will just have to exist as something with a reputation better than the reality, because if the movie ever does get a release (and there's talk that it could later this year, now that Amber Heard is a bigger star and Michael Welch was in Twilight) it's just going to confirm that it wasn't really worth the hype.